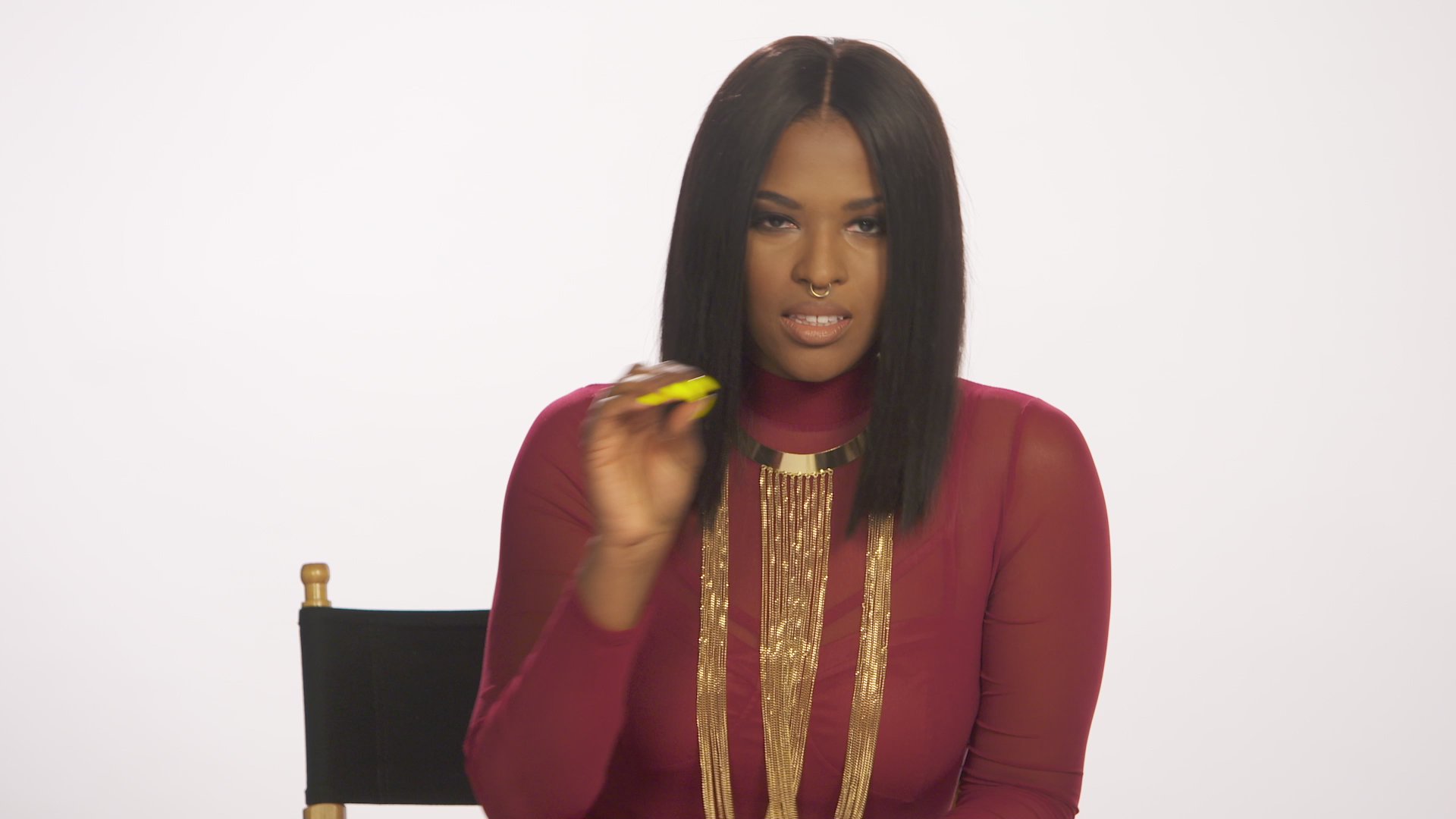 Hip-hop isn't just a man's world. On the new season of Sisterhood of Hip Hop (premiering July 12 at 9/8c), we follow five femcees as they continue the legacy of rap's greatest female performers. From lyrical and conscience to sexy and tough, women run the gamut of artistry. Here are the 10 best female MCs of all time.

Lil’ Kim called herself the Queen Bee with good reason. The pint-sized rapper learned how to ferociously spit under the legendary Notorious B.I.G.. The Brooklyn native stole the show in Junior M.A.F.I.A. and became a solo star with Hardcore. While female rappers in the ‘80s oftentimes downplayed sexuality, Lil’ Kim was fearless in flaunting it. Whether she was boasting about female satisfaction in "How Many Licks?", showing the world her curves at the MTV Video Music Awards or rocking any number of colorful wigs, Kim brought sexy and glam to hip-hop. — Sowmya Krishnamurthy

Taking her name from the famous 1974 movie, Foxy Brown is equal parts street and sexy. The husky-voiced vixen came to prominence on Jay Z’s “Ain’t No” in 1996. How many rappers can outshine Jay Z? Then just a teenager, she did it—and she would do so again and again, on tracks like “Sunshine (Always Be My)” and “I’ll Be.” Foxy went on to release her successful debut Ill Na Na and later joined Nas as part of The Firm. In the ‘90s, Foxy and Kim were the two hottest female rappers to watch and their back-and-forth is still one of hip-hop's best rivalries. — Sowmya Krishnamurthy

How many female rappers can become legends from just one album? Rapper, singer and actress, Lauryn Hill is one of the greatest female rappers because of the lasting legacy she's created. The multi-talented artist won hearts (and challenged minds) as the breakout superstar of The Fugees. Her solo debut, The Miseducation of Lauryn Hill, was dubbed an instant classic with its socially conscious lyrics and gorgeous melodies. L. Boogie was smart, beautiful and a killer emcee. It's been nearly 20 years since she gave us classics like “Doo Wop (That Thing)” and “Ex Factor.” After professional (and personal) collaborations with the Marley family and ongoing elusive behavior, we’ll probably never get another Lauryn Hill album but fans nonetheless wait on her triumphant return. — Sowmya Krishnamurthy

She’s supa dupa fly. Missy Ellliot flipped the script in the late '90s of what a female rapper could look and sound like. She began her career as a producer and songwriter, creating platinum sounds for Aaliyah, Ginuwine and Total, alongside Timbaland. Following immense success, she arrived as a rapper with 1997’s record-breaking Supa Dupa Fly, which was the highest-charting debut for a female rapper to date at that point. Eye-catching visuals, infectious beat and proud girl power), it’s no surprise that she's gone on to become an international star. — Sowmya Krishnamurthy

Pioneering classic hip-hop from a definitively female perspective, Brooklyn-bred MC Lyte is often grouped in with Salt N Peppa and other early Femcees. Fair enough: but Lyte held her own in an even more lady-impoverished hip-hop scene while simultaneously announcing loudly feminist politics. Battle tested from her early adversarial albums against a handful of rap game nemeses, Lyte went on to drop eight full-length albums, each unapologetically women-centric and all hard as hell. Later in life, Lyte would work hard at helping young women attend college through her philanthropic efforts as the founder of the Hip Hop Sisters Foundation. The first female solo rapper ever nominated for a Grammy and one of the only female rappers honored in VH1's Hip Hop Honors ceremony, the legendary status of Lyte has been long since established and unquestioned. — Eric Shorey

Eve was a star before we knew she was a star. She rapped on The Roots’ classic track “You Got Me” in 1999 (under the pseudonym Eve of Destruction). Later, this "pitbull in a skirt" became the First Lady of Ruff Ryders Records, working alongside DMX, The Lox and Swizz Beatz. Never one to be boxed in, Eve received acclaim for collaborating beyond rap. In 2002, she won the inaugural Grammy Award for Best Rap/Sung Collaboration for "Let Me Blow Ya Mind" with Gwen Stefani. The business-minded Philly native has expanded beyond music with Fetish (one of the few clothing lines by a female rapper), her own television show and acting roles like Barbershop. — Sowmya Krishnamurthy

The reigning rap queen is Nicki Minaj. Nicki honed her lyrical skills in NYC's competitive underground--a major boy's club. She signed with Lil Wayne's Young Money in 2009 and helped the label rise to fame with theatrics, rhymes, over-the-top fashion and of course, those incredible curves. In 2010, Nicki became the first female solo artist to have seven singles on the U.S. Billboard Hot 100 at the same time. When she's not teasing our "Anaconda" or giving us that "Super Bass," she's collaborating with every major rapper from Drake to Kanye West. Nicki's vocals are a hot commodity beyond hip-hop too, with superstars like David Guetta, Ariana Grande and even Madonna begging for a verse. — Sowmya Krishnamurthy

"I'm conceited. I got a reason." With those words, Remy Ma went down in hip-hop history as one of the baddest female MCs ever to touch the mic. Remy Ma, also known as Remy Martin, first started to shine as part of the Bronx-based rap crew Terror Squad back in the early 2000s. As the lone female member, Remy more than held her own on Fat Joe's "Lean Back," (the song that would put Terror Squad on the map and even earn them a Grammy nom), but it was her debut album that would make her one of the most well-known female rappers in the game.

There's Something About Remy (Based On A True Story) showed off the rapper's trademarks - her attitude, butter-smooth flow, and the effortless swagger that she'd come to be known for. Remy may have dropped off the radar for a while (serving six years of an eight year sentence for assault will do that to an artist), but after her release from jail in 2014, she hopped right back into making music, reclaiming her spot and teaming up with Fat Joe for "All The Way Up" earlier this year. — Sharon Lynn Pruitt

When it comes to being a multi-threat, Queen Latifah is the originator. In the '80s (at a time when women in hip-hop were rare), she sat on the throne as a proud feminist with tracks like "U.N.I.T.Y." She seamlessly transitioned into acting, showcasing range in roles from The Fresh Prince of Bel-Air to Chicago. When she’s not on-set, the Queen is striking a pose as a CoverGirl with her own line. In 2006, the royal rapper received her own star on the Hollywood Walk of Fame. — Sowmya Krishnamurthy

As late 90's hip-hop amped up in BPM, experimentalism, and aggression, Rah Digga (real name: Rashia Fisher) held her own with some of the hardest hitting rappers in Busta Rhymes' Flipmode Squad. Hailing from Jersey, Rah Digga was featured on early Fugees tracks, later leading to a discovery by Q-Tip and Busta. Releasing only three full-length albums in her career so far, Digga's features (of which there are more 40) were hotly pursued by the entire hip-hop world. Even after departing from various crews, Rah managed to establish herself as a considerable talent in her own right and is widely recognized as precedent-setting for the female MCs of today. — Eric Shorey

All Posts About
Sisterhood of Hip Hop
Related Show