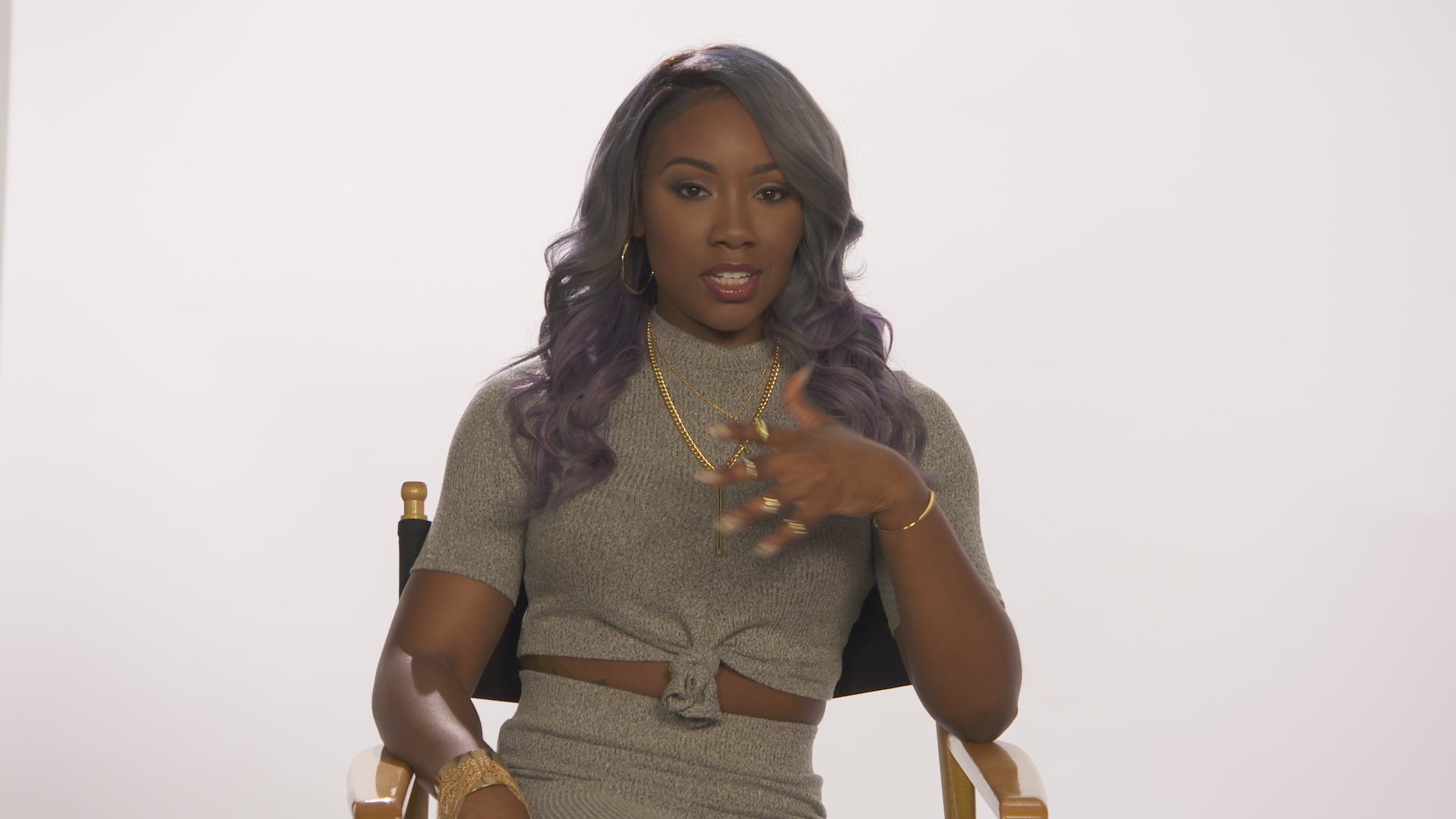 On the new season of Sisterhood of Hip Hop (premiering July 12 at 9/8c), some of our favorite cast members are getting into the studio to record albums. They've got some very tough competition from the greats that came before them. Here are the 14 best hip-hop albums of all time.

What do you get when you take nine rappers, an obsession with kung-fu and the genius of RZA? Wu-Tang Clan’s debut album is one of the most influential in hip-hop history. With such a large group, members had to essentially compete to appear on each song. Tracks like “C.R.E.A.M.” and “Method Man” showcase the dark, gritty sound and streetwise lyrics of the group, who have remained—both collectively and as individual members Ghostface Killah, Method Man, RZA and Raekwon—relevant since the album came out in 1993. — Sowmya Krishnamurthy

Eric B. & Rakim’s debut album set the standard for hip-hop in 1987. With Rakim’s intricate lyrics and Eric B.’s penchant for sampling, tracks like "Eric B. Is President", "I Ain't No Joke", "Move the Crowd" and "Paid in Full" became fan favorites. The album has influenced countless New York rappers for decades, and it was officially certified platinum in 1995. — Sowmya Krishnamurthy

OutKast was already a great group but its fifth album, Speakerboxxx/The Love Below, took Big Boi and Andre 3000’s artistry to new, experimental levels. Each disc of the two-disc effort represents something unique: Big Boi's Speakerboxxx is a Southern hip-hop album while Andre’s The Love Below is steeped in funk, pop and singing. With the hit singles "Hey Ya!" and "The Way You Move," OutKast proved that each member could shine individually as well as together. — Sowmya Krishnamurthy

Its ominous title said it all. The Notorious  B.I.G.’s 1994 debut album is an autobiographical snapshot of the dark, complex and oftentimes heartbreaking life of a young man in Brooklyn. Blending storytelling (“Things Done Changed”) with club anthems (“Big Poppa”) and radio hits (“Juicy”), the album catapulted Biggie Smalls to the throne of East Coast hip-hop. — Sowmya Krishnamurthy

White boy rap gets a bad name these days but in the early days of late 80's rap, the revolutionariness of The Beastie Boys was incredibly prescient. The album drew from a handful of disparate influences: house music, hip-hop, turntablism, classic and punk rock, and early jungle, just to mention a few. Notable for it's almost exclusive use of samples as opposed to original instrumentation, it is astonishing to think about how the album was considered a commercial failure upon it's debut. Undergoing critical re-examination, Rolling Stone described the LP as “a celebration of American junk culture that is still blowing minds today - even fourteen years of obsessive listening can't exhaust all the musical and lyrical jokes crammed into Paul's Boutique.” — Eric Shorey

There are few albums as perfect as Illmatic. From start to finish, the 10-track offering took Nas’ underground rap sensibility and turned it into a cohesive album. Nas’ lyrics and insight on songs like “Halftime” and “One Love” take center stage over beats from amazing producers like Pete Rock, DJ Premier and Q-Tip. Unlike albums today that are often cluttered with guests, Illmatic features just one, well-placed feature from friend AZ. Upon release, it received a coveted, perfect 5-mic rating in hip-hop bible The Source, which was unheard of for a new artist. — Sowmya Krishnamurthy

It’s hard to pick just one Jay Z to be on this list. The rapper’s sixth album, The Blueprint, reflected Jay at a crossroads in his life. At the time recording, he was awaiting two criminal trials (one for gun possession and another for assault) and had become dissed by contemporaries like Nas, Jadakiss and Prodigy. Hov used the album as a platform to vent his feelings from the diss track “Takeover” to "Heart of the City (Ain't No Love).” Amid anthems like “U Don’t Know” and “Izzo (H.O.V.A.),” the album also found the usually stiff-lipped rapper being vulnerable and opening up about lost love on “Song Cry.” The commercial and critical success of The Blueprint also helped propel Kanye West into becoming one of hip-hop’s most influential producers.— Sowmya Krishnamurthy

No one saw Eminem coming. A self-described "little white boy from Detroit," Marshall Mathers—better known as Eminem—didn't exactly look the way people had come to expect iconic rappers to look. His mentor, Dr. Dre, was even criticized for taking a white rapper under his wing, but it was a decision that would soon become more than justifiable as the Detroit native quickly became one of the most well-known (and polarizing) artists in hip-hop history.

With his third album, Eminem showed us all who the real Slim Shady really was. With songs like "My Name Is" and "The Way I Am," Em showed off the outrageous obscenity and unbridled aggression that you either loved or hated, while songs like "Stan" let his impressive storytelling ability take center stage. Quick-witted, captivating, and unapologetically offensive, The Marshall Mathers LP is Eminem at his best. — Sharon Lynn Pruitt

After a disappointing debut, The Fugees came back with a vengeance on its second album The Score. The trio of Lauryn Hill, Wyclef Jean and Pras gave us a cinematic masterpiece, telling ghetto tales over a lush blend of genres. Lauryn’s warm melodies coupled with production from Salaam Remi, Diamond D and Jerry Duplessis resulted in what is one of the most distinctive, far-out and ambitious albums on the list. — Sowmya Krishnamurthy

Few albums announce the average BPM of its tracks as a prelude to the songs to come but Tribe Called Quest's masterpiece wasn't about maintaining the status quo. Combining jazz, afrobeat, and hip-hop influences, MM had literary aspirations (drawing inspiration from W.E.B. Dubois) and narratological complexity perhaps unmatched by any hip-hop album since its 1993 release. Marauders was almost universally well received upon it's release, but Rolling Stone at the time offered a bafflingly negative appraisal of the work, saying: “[I]nstead of coming off impassioned, the Tribe only sound cranky … at this point the band might more accurately be called A Tribe Called Flounder." That opinion hardly mattered, considering the album had reached platinum status only two years after its release. — Eric Shorey

You can't talk about West Coast rap or even gangster rap without talking about N.W.A., and you can't talk about N.W.A. without paying respect to their debut album, and one of the greatest hip-hop records of all time, Straight Outta Compton. Ice Cube and MC Ren - chief lyricists of N.W.A. - took inspiration directly from life on the streets, and crafted that inspiration into rhymes that were gritty and real in a way that no one had ever heard before. No subject was off the table, and it was that kind of bold, brutal honesty on topics like police brutality and gang violence that captivated a nation. Still, despite the album's popularity with well-off kids in the suburbs, SOC was intended to speak to a disenfranchised, inner-city audience previously ignored by mainstream media, and it was that fearless lack of concern with impressing mainstream audiences that made the album so memorable. SOC would eventually go double-platinum, which is even more impressive when you consider that most radio stations at the time wouldn't touch it with a ten-foot pole. — Sharon Lynn Pruitt

At the height of the feud between West Coast and East Coast rap, 2Pac released his landmark album All Eyez on Me. The 1996 double disc is a triumph of gangsta rap, from club bangers like “How Do U Want It” and “California Love” (which is still pretty much the anthem of the entire state). Fellow Death Row stars like Snoop Dogg, Dr. Dre and Nate Dogg make appearances. Although Pac was tragically murdered amid the album’s release (the music video for the final single “I Ain’t Mad at Cha” features him getting shot), its thug life themes continue to resonate. The album was certified Diamond (10 million units sold) in 2014. — Sowmya Krishnamurthy

13. It Takes A Nation Of Millions To Hold Us Back — Public Enemy

"I don't rhyme for the sake of riddlin." If the spirit of Public Enemy could be boiled down to one lyric, it would be the above - arguably one of Chuck D's most memorable lines. Public Enemy was music with a message, and nothing greater illustrated this than their sophomore album. Released in 1988, It Takes A Nation Of Millions To Hold Us Back was a bold political statement wrapped up in ferocious beats and spastic instrumentals, and would become the album that cemented their place in the unofficial hip-hop hall of fame. It changed the face of the genre. Before ITANOMTHUB, people weren't aware that hip-hop could be all the things PE made out of it: it was a musical mixing pot that centered fearless and clever social and political commentary, and it was loud and fun, all at the same time. It was music for rebels with a cause, and it was nothing short of revolutionary.

The definitions of female rap have always been limited. Either you’re a roughneck tomboy or a sex kitten. Missy Elliott changed that with her debut album Supa Dupa Fly in 1997. Drawing on her musical sensibilities as a producer, Missy and friend Timbaland created a completely fresh and innovative take on hip-hop. Each track, from the sexy “Sock It 2 Me” to the plaintive “Beep Me 911” is unique and unpredictable. Missy’s avant-garde and feminist vision translated to her music videos as well. While other women were pressured to take it off, she always kept it body-positive and confident, even rocking an inflatable trash bag in “The Rain (Supa Dupa Fly)." — Sowmya Krishnamurthy

All Posts About
Sisterhood of Hip Hop
Related Stories

The 10 Best Female MCs Of All Time