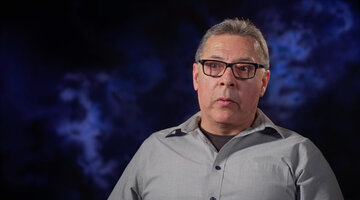 2:48
Preview
Omar Hernandez’s Wife Remembers the Sounds of Him Being Shot 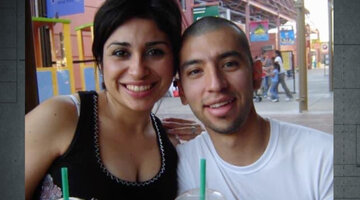 2:16
Preview
Who Was Omar Hernandez?

Omar Hernandez had been leaving for work just before 2 a.m. on October 9, 2016 when he was mercilessly gunned down in a hail of bullets outside his Mammoth Lakes, California home.

The 35-year-old married father of two was found moments later by his wife, Gladys Gastelum, laying face down on the driveway in a pool of blood. Her screams were heard by a neighbor who quickly called 911.

“I remember I wanted to hug Omar. And someone said, ‘No, don’t touch him! Don’t touch him!’ and I said, ‘But why not? He’s my husband. I want to make sure he’s OK,’” Gastelum would later tell “An Unexpected Killer,” airing Fridays at 8/7c on Oxygen.

The savage nature of the killing rocked the small mountain community, which is home to ski resorts and nature trails. Investigators believed Hernandez had been ambushed as he was leaving for work at a local Vons grocery store by a killer armed with an AK-47.

The killer continued to fire even after Hernandez fell to the ground.

“When I arrived on scene, I’ve never seen anything like that. Omar had approximately 15 gunshot wounds to his body,” said Jack Loera, a detective with Mammoth Lakes Police Department.

Watch 'An Unexpected Killer' Episodes In Our Free App

Hernandez, a native of Mexico, had come to the United States at the age of 18 in search of a better life and had been considered a devoted employee and supervisor at the grocery store where he had worked for eight years.

“At work Omar was known to be a kind and caring, almost big brother figure to a lot of the employees he supervised,” Emily Crocetti, a reporter for The Sheet, told “An Unexpected Killer.” “He took them under his wing and really tried to help them feel like they belonged.”

It didn’t take long for investigators to conclude that Hernandez, the father of two young sons, hadn’t been killed at random.

It would take investigators more than three years to unravel the complex mystery and uncover an unexpected killer with a chilling motive.

Shortly after the shooting, a distraught Gastelum told investigators that she suspected her husband may have been gunned down by the husband of another employee at the grocery store. The man, Saul, suspected that Hernandez had been having an affair with his wife, Rosalinda, and had confronted Hernandez at his home about the suspected relationship about a year earlier.

In the months that would follow, Gastelum told investigators, Saul continued to drive by their home and was spotted passing the home just three days before the fatal shooting. Employees at the grocery store also reported that Saul had frequently stopped at the grocery store, presumably trying to catch the pair in the act.

The intimidation had gotten so extreme that Hernandez had filed a restraining order against the angry husband before his death.

“That was an attempt for Omar to get Saul to stop coming to his house, stop contacting his wife,” said Chris Callinan, an investigator with the district attorney’s office in Mono County.

Rosalinda initially denied the affair, but investigators would later uncover text messages that proved not only had there been a relationship between the coworkers but Gastelum had been aware of the romance after coming home from visiting her family in Mexico and finding wine glasses and rose petals meant for someone else in the couple’s home.

Gastelum insisted she had only kept the affair a secret because she wanted to honor her husband’s memory.

“I met him and it was love at first sight,” she would later tell “An Unexpected Killer.” “I knew he was a great person.”

Investigators were also unable to find any evidence to link Saul to the murder and his DNA did not match the spent shell casings found at the scene.

Authorities soon turned their attention to several other coworkers of Hernandez's, including Eliud Corea-Vasquez, a man who allegedly had a reputation as a one-time gang member in El Salvador and had clashed with Hernandez at the store.

“Employees did tell me that Omar was the supervisor for the Salvadorians and it appeared that they didn’t like Omar. They didn’t like taking orders from him,” Loera said.

Although there appeared to be tensions between the man and Hernandez, there wasn’t any concrete evidence to link him to the shooting.

While investigators had recovered a grainy surveillance video from down the street of the murder showing what appeared to be a silver sedan — likely a Toyota Camry or Corolla — circling the neighborhood shortly before the shooting, they had few other clues to go on and the case went cold.

“There was nothing to indicate any one person was responsible,” Callinan said.

RELATED: Beloved Texas Teacher And Mother Of Four Is Brutally Killed While Her Family Slept

It wasn’t until years later that another coworker, Francisco Ramirez-Garcia, would provide the startling break in the case. He reached out to police in June 2019 to say that he knew who had killed Hernandez.

Ramirez-Garcia pointed authorities toward Josue Corea-Vasquez, Eliud Corea-Vasquez’s brother, who had also worked at the store.

Josue had confided in Ramirez-Garcia that he hated Hernandez. Just hours after the murder, Ramirez-Garcia said he had received a chilling text from Josue that said, “You see? Nobody messes with me,” according to The Sheet.

Ramirez-Garcia also told investigators that he had once gone shooting with Josue, who had owned an AK-47. Investigators also discovered that Josue had once owned a silver Toyota Camry matching the one seen in the surveillance footage the morning of the deadly shooting.

Ramirez-Garcia remained silent for years until he was promoted as a supervisor at the grocery store and began to have the same problems with the family.

“Francisco said that he was scared of Josue,” said David Anderson, Assistant District Attorney for Mono County. “Francisco realized, ‘I could be the one that’s next and this guy needs to be stopped.’”

When investigators arrested Josue and brought him in to be interviewed, he coldly admitted to killing his supervisor after lying in wait for him to come out of his home.

“That day the hate invaded me, and I felt this is the day I’m going to do it,” he said in Spanish.

Josue described how he circled the block several times before parking outside the home and waited until he saw Hernandez come out.

“He grabbed the AK-47. When Omar went to the driver’s side to leave, Josue emerged from the trees and yelled at him, ‘You don’t look so invincible now, do you?’ and described shooting him several times,” Callinan said.

Josue told investigators he had “lots of hate” and “shot the whole cartridge into him” before fleeing the scene and going home to bed.

The motive for killing the grocery store supervisor was even more disturbing because Hernandez had once tried to take Josue under his wing and had even invited him over for Christmas dinner years, according to The Sheet.

Authorities said that relationship changed when Hernandez was promoted to a supervisor role at the store.

In a chilling apology letter he later wrote to Hernandez’ two sons Josue said, “I am sorry for what I’ve done, but when you get older you will realize that your father was a bad human and an even worse man,” The Sheet reports.

Josue was later found guilty of murder and sentenced to two life sentences.

His brother Eliud was also arrested in the case for helping him conceal evidence after the shooting, by burying the AK-47 in the woods.

For more on this case and others like it, watch "An Unexpected Killer,” airing Fridays at 8/7c on Oxygen or stream episodes here.

Who Murdered A 22-Year-Old Woman In Her Own Home?