Sign Up for Free to View
R. Kelly Misconduct Allegations May Lead to Investigations 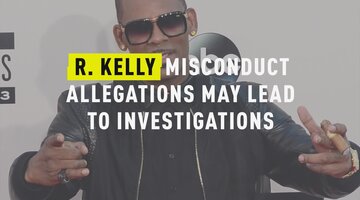 A newly surfaced video allegedly appears to show R&B singer R.Kelly having sex with an underage girl while referring to her body parts as being “14 years old.”

The approximately 45-minute tape shows a man who appears to be Kelly having sex with a young girl, CNN, who said it's seen the tape, reports. The news outlet called the video “clear and explicit,” and stated that it appears to depict the disgraced star having sex with the girl in a living room and a bedroom.

In the footage, the victim allegedly calls him “daddy." Both she and the man in the video, who appears to be Kelly, allegedly refer to her "14-year-old p---y” multiple times. The man asks the girl in the video to urinate and she does, according to CNN. After, the man urinates on her.

That part of the footage is similar to a legal battle Kelly was embroiled with beginning in 2002 after an anonymous party leaked a sex tape to the media that allegedly featured Kelly engaged in a sexual encounter with an underage girl and urinating on her. In reference to those allegations, Kelly was charged in Illinois with 14 counts of videotaping, producing, or soliciting child pornography months later but after a lengthy six-year legal battle, he was found not guilty on all counts.

Attorney Michael Avenatti, who says he is representing multiple clients in connection with allegations of sexual assault of minors by the “Bump and Grind” singer, tweeted on Thursday a formal statement saying the tape shows “Kelly engaging in multiple sexual assaults of a girl underage.” He said that “the time frame of sexual assaults depicted in the video is within the Illinois statute of limitations.”

A senior law-enforcement official told The New Yorker Thursday that the newly surfaced tape could lead to Kelly being indicted in the same state again; Avenatti reportedly confirmed prosecutors are investigating the tape on Thursday afternoon, according to CNN.

Avenatti also said he recently discovered the VHS tape and made it clear in his statement that the newly surfaced video "not the same evidence previously seen and used in connection with the prior criminal matter in which Mr. Kelly was charged nor does it depict the same instances of sexual assault."

He called Kelly a "predator and a criminal who has prayed [sic] on young, vulnerable girls for far too long."

Kelly has recently been under much scrutiny after the premiere of Lifetime’s “Surviving R. Kelly” documentary, a six-part series which explored decades of sexual misconduct allegations. Kelly continues to adamantly deny the accusations.

In the past, Greenberg stated that his client “never knowingly had sex with an underage woman, he never forced anyone to do anything, he never held anyone captive, he never abused anyone.”