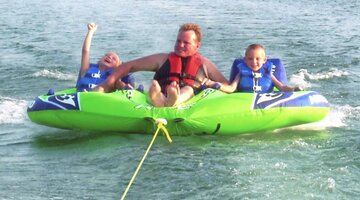 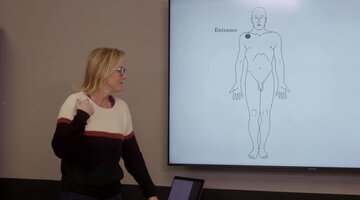 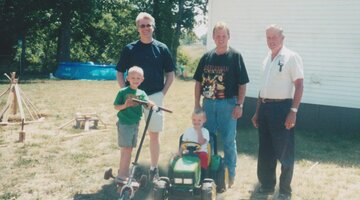 Ricky Luebbert was a 42-year-old devoted single dad with two young sons when he was shot to death 15 years ago at his home in Missouri.

Luebbert’s body was found on November 10, 2007 at his trailer in Tyrone, reported the Houston Herald. He had last been seen on November 7 at a local football game, which he left at around 7:45 p.m. It’s believed he was fatally shot shortly after that.

There were two bullet holes in the window of his trailer: One went completely through the trailer, while the other one passed through Ricky. The shots were fired from about 130 yards away and came from a .30-caliber rifle, the type of weapon used often by deer hunters, according to Spingola.

“But this was no hunting accident,” said Spingola. “It was a cold-blooded assassination.”

The victim’s only known enemies were his ex-girlfriend, Alice Mader, who he was in a heated custody battle with — Texas County officers said that Mader, who had a reputation for outspokenness, had stated publicly that she wished Luebbert was dead. There was also her new husband, Tommie Whetzell, then 49, according to Siegler.

On November 8 and on November 10, Mader made calls to the Sheriff’s Office to report that Luebbert atypically missed appointments with his sons. Was she truly concerned? Or covering her tracks?

“Police have never believed that Alice was the one that actually pulled the trigger, but she may have had it done,” said Spingola.

Whetzell spent time in the military and was a deer hunter, so he was proficient with a rifle. He and Mader began dating after she and Ricky separated in 2003, and married in 2005. Luebbert and Whetzell disliked each other, and were said to have traded violent threats on the evening of November 7 when Luebbert was allegedly enraged that Whetzell struck one of his children.

Whetzell’s alibi for the night of the crime: He was home watching TV and using his computer, he claimed.

The big question, said Spingola, was whether Mader just hated her ex or if she planned on doing something about that. A court custody date was set for November 29, shortly before the murder.

One of Luebbert’s former co-workers told investigators Luebbert commented that Mader “would control every situation” and had threatened him.

Mark and Denise Quessenberry, other co-workers, told investigators that Whetzell made threatening comments about Luebbert to them.

Janice Woodmancie, another witness, recalled Mader making statements about wanting to get rid of Luebbert.

“She hated him,” she said. “She didn’t want him around the boys.”

“We don’t know what time Ricky was killed. But we know that Alice and the boys got home from the football game around 9:30 and at that time Tommie was home,” said Siegler. “If that's true, and Tommie killed Ricky, then it likely happened before then.”

“We know that Ricky threatened Tommie on the phone around 6:30 p.m. and then Ricky showed up at the game around 7:30 p.m.,” added Siegler. “But what happened after that?”

Devlin’s digging helped create a clearer timeline. Mader called Luebbert at 7:21 p.m. and 7:29 p.m before calling Whetzell at 7:30 p.m., right when Luebbert got to the game. She called Whetzell again at 7:43 p.m., just minutes before Luebbert was last seen leaving the game, and called Whetzell yet another time at 8:11 p.m.

“At 8:38 Tommie Whetzell called Alice Mader from his cell phone to her cell phone,” said Devlin.

Investigators believe the window for the shooting was between 8:11 p.m. and 8:38 p.m.

Mader’s phone records also showed that she made phone calls to Luebbert after the football game.

Although Whetzell said he was home using his TV and computer on the night of November 7, his records told a different story. Devlin’s analysis showed that from 7:58 p.m. to 11 p.m. that night there was no computer activity. It also showed that the 8:38 p.m. call Whetzell made to Mader pinged from a phone tower near Luebbert’s trailer.

Mader and Whetzell, who separated years after the murder, were interviewed separately by investigators.

Siegler and Douglas spoke with Mader, who said she knew that her comments about wanting her husband dead made her look bad. She denied any connection to the murder and had no information about Whetzell’s link to it.

“Just so you know, he didn't tell me anything,” she said.

She also added a startling bit of new information: When she arrived home and Whetzell was there, she smelled gunpowder. He said it was from target practice.

When Spingola and Applegate spoke with Whetzell, he said he’d need to get a lawyer.

Investigators reviewed the case, and concluded the evidence enabled them to clear Mader as a suspect and pointed toward Whetzell. Texas County sheriffs prepared to present the case to the prosecuting attorney to move it further.

On June 29, 2022, the Texas County Sheriff's department arrested Whetzell for the 2007 murder.

To learn more about the case, watch “Cold Justice,” airing Saturdays at 8/7c on Oxygen.