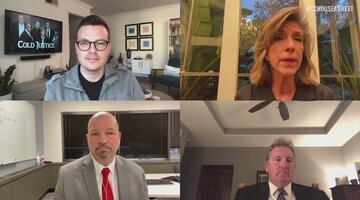 Working alongside local law enforcement in the U.S., the investigative team behind “Cold Justice” has helped secure 20 convictions and 45 arrests.

So, what are the main reasons cases get mishandled and go unsolved for so long?

That was a probing question put to “Cold Justice” stars Kelly Siegler, Abbey Abbondandolo, and Steve Spingola at CrimeCon: “House Arrest,” a virtual event that revolved around true crime that streamed on November 21.

“The system is oftentimes just overwhelmed,” said Abbondandolo, calling upon his more than two decades as a homicide investigator. “I don’t think it’s anything nefarious.”

“I think it’s easy for us to come in from out of town and work on one case and dedicate all of our time and resources,” he added.

During the 25-minute discussion led by Entertainment Weekly Senior TV Editor Gerrad Hall, the far-reaching conversation ranged from unforgettable past cases to COVID-19 and its impact on the series to car rides that get plenty of screen time in the series (“We have a lot of fun in the car,” they assured) and the mysteries of confessions.

“People confess for different reasons,” said Spingola. “You have people who just walk into police stations and confess to crimes we never would have solved. Some people just have that breakdown, whether it’s religion … and they want to clear their conscience with God. It is interesting why people confess and why some people never will.”

The team took time to bring the audience up to speed on past cases — from trial dates to guilty pleadings. Upcoming enhanced “Cold Justice” episodes will cover such updates and, they said,” are “a way of letting people know that we’re still here.”

In a fascinating moment, the “Cold Justice" crew discussed how the show’s behind-the-scenes looks into crime-solving helps people have a better understanding of the justice system — and the search for truth.

“Women can tell when someone is lying better than men,” said Spingola.

Siegler’s response: “That’s because they listen.”