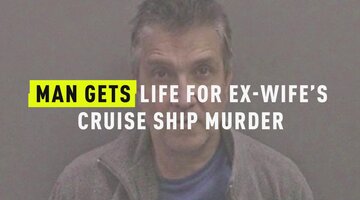 A former California lawyer was sentenced Friday to life in prison without the possibility of parole for strangling his third wife to death and then throwing her body off a cruise ship in an attempt to inherit her money.

Lonnie Loren Kocontes, 62, of Safety Harbor, Florida was convicted of first-degree murder in June for killing his former wife Micki Kanesaki, 52, and throwing her overboard on a cruise ship in the Mediterranean in May 2006. The charge carried a special circumstances enhancement of murder for financial gain.

Kocontes “almost got away with murder,” Orange County District Attorney Todd Spitzer said in a statement after the sentencing.

“Except for the fact that he strangled her to death before he threw her body overboard. Because she died before she hit the water her lungs were filled with air, not water. So she floated. And by a miracle, her body was discovered. That miscalculation allowed us to convict him of murder,” Spitzer said.

Her body was found floating off the coast of Paola, Italy two days after she was thrown overboard.

The couple had already split when Kocontes booked the Mediterranean cruise for them. Kocontes testified at trial that the couple had reconciled and were planning to remarry. Prosecutors, however, maintained that Kocontes plotted to kill Kanesaki for financial gain. He would have inherited more than $1 million from her bank accounts and from the sale of a home they owned, a June press release from the Spitzer’s office read. He was listed as a beneficiary for both.

“You are a vicious, cruel, evil person,” Kanesaki’s brother Toshi Kanesaki told Kocontes during sentencing, the Orange County Register reported. “You are rotten to the core.”

During his trial, Kocontes maintained his innocence. He claimed he had taken a sleeping pill and woke up to find his former wife missing.

Kocontes became the target of a federal investigation in 2008 after he attempted to transfer $1 million between various bank accounts which belonged to his former wife. But Kocontes' fourth wife, Amy Nguyen — whom he had married and divorced prior to Kanesaki's murder — testified before a federal grand jury on his behalf and the case fizzled out, according to the Orange County Register.

The Orange County District Attorney's Office later picked up the case, however, and Nguyen eventually told authorities that Kocontes had pressured her to lie before the grand jury. She said he had threatened to have someone kill Kanesaki aboard the ship and later told her he'd have to "take matters into his own hands." Kocontes was indicted for Kanesaki's murder in 2013 as a result.

While in custody, Kocontes allegedly attempted to hire two fellow inmates to kill Nguyen in order to prevent her from testifying during his murder trial. Just as Kocontes denied killing his third wife, he denied trying to have his fourth wife killed as well. Kocontes was charged with two counts of solicitation to commit murder and a count of solicitation to bribe a witness.

A judge dismissed those charges in light of his life sentence, the Orange County Register reports.

Spitzer noted that, despite Kocontes' best-laid plans, he had actually authored his own demise.

“The defendant thought he committed the perfect crime by throwing the victim overboard from the balcony of a cruise ship in the middle of the ocean,” he stated in June. “But he made a mistake. Despite all of his painstaking planning to pick the perfect ship, the perfect room and the perfect time to commit a murder, the fact that he strangled her before throwing her overboard gave us the very evidence to convict him of murder.”