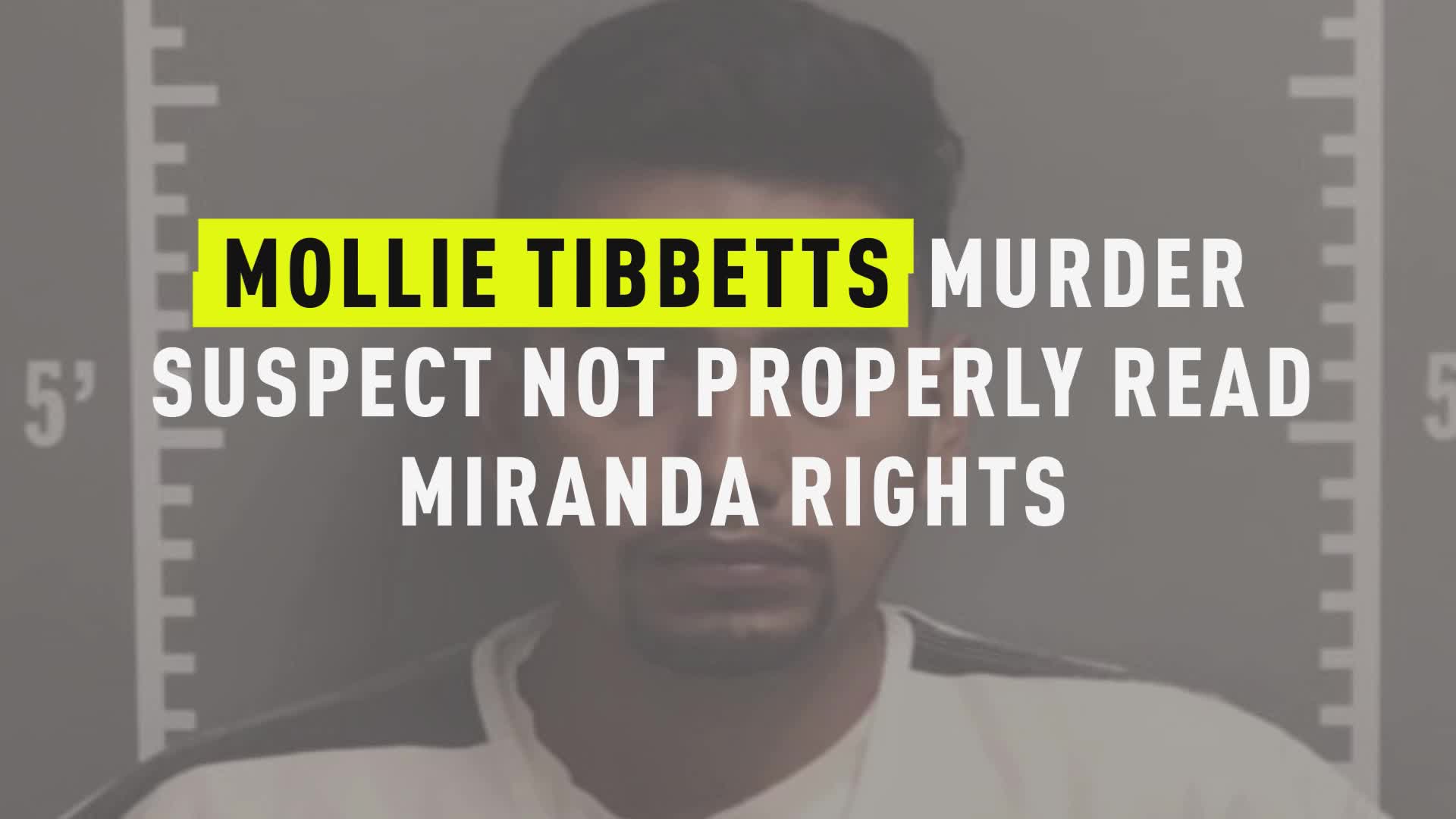 Defense attorneys for the man suspected of killing Iowa college student Mollie Tibbetts want evidence in the case thrown out because he was not properly read his Miranda rights.

A Poweshiek County judge heard arguments from Cristhian Bahena Rivera’s defense team and prosecutors Wednesday, November 13, as investigators also took the stand to provide new details in the case, according to The Des Moines Register.

Tibbetts’ body was discovered August 21, 2018 — more than a month after she disappeared while out on a jog—in a cornfield after Bahena Rivera led authorities to the location. She was lying on her back with her legs spread, Poweshiek County Deputy Steve Kivi said in court, according to Fox News. Tibbetts was wearing a pink jogging top and black shorts, but investigators have never been able to find other personal items like her phone and Fitbit, he testified.

Kivi provided testimony in a pre-trial hearing that is expected to determine what evidence will be allowed in trial.

Rivera’s defense team has argued that any evidence that came from a police interview with Bahena Rivera should be thrown out because he had not been read his Miranda rights, the Associated Press reports.

Prosecutors have acknowledged that Bahena Rivera was not initially read his full rights after his arrest on August 20, 2018, but said he was later read his rights in full in a car after he led investigators to the body. Prosecutors have argued that the comments made by Bahena Rivera should be admissible because Tibbetts' body would have been discovered anyway.

Investigators testified on Wednesday that they believe they would have found Tibbetts' body even if Bahena Rivera had not led them there when farmers in the area began to harvest their crops — especially because Tibbetts had been wearing fluorescent running shoes.

“I know the farmers were pretty anxious,” DCI Special Agent Trent Vileta said, according to the local paper. “No one wanted to be the one to find her.”

Bahena Rivera came to investigators’ attention after they discovered a video showing a jogger that was believed to be Tibbetts and a black Chevy Malibu with chrome detailing on Aug. 15, 2018.

The following day Kivi told the court he drove by a “virtually identical” vehicle and began to follow it. When Bahena Rivera got out of the vehicle, Kivi approached him, asked his name, and learned he worked at Yarrabee Farms. He also asked whether Bahena Rivera knew anything about Tibbetts.

A few days later, law enforcement officers went to Yarrabee Farms to speak with him again. They asked him to come in for questioning and Bahena Rivera agreed.

Around 11:30 p.m. that night Bahena Rivera was officially detained and read a partial version of the Miranda warning for the first time.

Vileta testified that investigators decided to detain Bahena Rivera at that time because blood found in his car matched Tibbetts' DNA, the Des Moines Register reports.

DCI Special Agent Scott Green testified that any time before he was arrested, Bahena Rivera could have left the sheriff’s office, KCCI reports. Investigators said that Bahena Rivera also still had his phone and was given food and bathroom breaks during the interrogation.

Early the next morning, he led investigators to the body and the Miranda warning was read in full by a Spanish speaking officer.

The decision about what evidence to allow in his trial will be left up to Judge Joel Yates.

Evidence May Be Tossed In Mollie Tibbetts' Murder Case