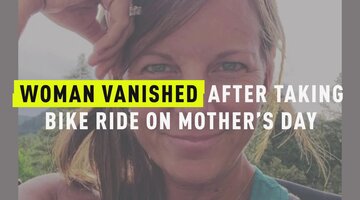 A Colorado woman who took a bicycle ride on Mother’s Day has vanished without a trace.

Suzanne Morphew, 49, was reported missing by a neighbor in Maysville, Colorado on May 10, according to authorities. Law enforcement received the call around 6 p.m. on Sunday. She was last seen in the area of County Road 225 and West Highway 50.

“[She] had reportedly gone for a bike ride in the area and failed to return home,” Chaffee County Sheriff said in a statement.

More than 100 people, including search dogs, scoured the area for days following the woman’s disappearance but so far their search efforts have come up fruitless. The FBI and a number of other local law enforcement agencies have since gotten involved in the 49-year-old’s disappearance, according to Colorado Springs radio station KVOR. The investigation is ongoing. There’s currently no indication of foul play.

“It’s the hardest thing,” Morphew’s nephew, Trevor Noel, told KCNC-TV. “She’s a beloved member of her family and the sweetest person that you’ve ever met.”

Morphew is a mother of two, the New York Post reported. Her husband has cooperated with investigators, and was supposedly out of town at the time of her disappearance, according to Morphew’s family, Denver television station KCNC-TV reported.

Morphew is from Maysville, a small Colorado hamlet, which a decade ago had a population of 135 in 2010, according to a 2010 census.

A $200,000 reward has been offered in exchange for any viable information related to Morphew’s whereabouts, the Denver Post reported.

The woman’s nephew said the search efforts for his aunt have taken their toll on his family — both mentally and physically.

“It’s really tough,” Noel told KCNC-TV. “It’s taxing up and down these hills. And it’s emotionally draining you know being with the family and still being empty handed. We want to leave our options open and we want to make sure that we cover every hill… and know that everyone out here is doing everything they possibly can to find her.”

A Facebook group entitled “Find Suzanne Morphew” has since been set up to bring awareness to the case. A GoFundMe has also been organized to support the woman’s family, as well as cover the costs of their ongoing search efforts. The fundraiser has drawn nearly $24,000 in donations.

“I want her to know that the family wants her back and we love her we’re out there working for her,” Noel told the CBS affiliate.

Relatives urged anyone with information related to Morphew’s disappearance to contact a local tip line that’s been established.

Woman Disappeared On Super Bowl Sunday While Out For A Walk