It’s not the typical wedding photograph: a bride in a white dress with her hands cuffed behind her back. It will certainly be a photo to remember, but it probably won’t be included in Amber Young’s wedding album.

Young, 32, was arrested in Arizona while driving to her wedding on Monday morning. Police believed she was impaired. Sgt. Chriswell Scott of the Marana Police Department tweeted a picture of the arrest, which was later deleted.

The bride’s arrest followed a three-car crash, and Scott insinuated in a now-deleted tweet that Young’s alleged intoxication was a factor.

“Don’t drive impaired, till death do we part doesn’t need any help,” he tweeted, adding that one person suffered minor injuries in the crash.

The bride didn’t take a breath test and she was later released after “submitting to a blood draw.” After signing a criminal citation, she was released to her fiance, according to KVOA in Tucson. It’s unknown if they still married that day or if they postponed the wedding.

Arizona has some of the harshest DUI laws in the country, according to KPHO in Arizona. In fact, the state’s law allows for legal consequences even if someone is impaired to a slight degree. 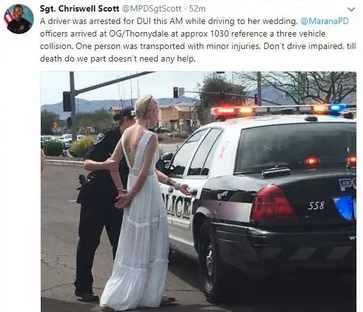 Do you think that Scott went too far by tweeting the photo of Young on her wedding day? Do you think the arrest was humiliating enough or do you feel that it’s an understandable consequence as a result of her actions?