Both Episode 6 and 7 of American Crime Story: The Assassination of Gianni Versace were directed by Gwyneth Horder-Payton. The two episodes, titled "Descent" and "Ascent," form a neat diptych depicting the imagined suffering of Cunanan, whose inability to seperate fact from fiction led him into increasingly dangerous proclivities. To what extent he is the product of pure evil or a series of misfortunes is a question begged by the show.

Episode 7 starts in Milan, Italy in 1992. Donatella appears to have taken a creative lead in the design process as Gianni's health deteriorates (amidst denials of his condition). The siblings argue over the future of the company — can Donatella handle the pressure of their line after Gianni's imminent demise?

This marks the return of the eponymous family to the series, who had been conspicuously absent for much of the show —  considering the program's title.

In San Diego at the same time: Cunanan is working in a convenience store. He continues telling lies to customers about his future prospects as a PhD candidate. He lives with his mother, embroiled in a constant, semi-incestuous battle with her.

Later, Andrew and Trail head to a gay bar where Cunanan continues to create elaborate lies about his past, his family, his income. An older gentleman approaches him with his phone number, implying that his needs could be taken care of.

The next day, as if inspired by the events of the night before, Cunanan finds himself interviewing at an escort service. Despite his superior wit, the interviewer is unimpressed with his racial identity and demeanor. He decides to sell himself.

Back to the Versaces. Gianni and Donatella are working on a masterpiece together. Gianni thinks Donatella should be the model for his piece de resistance in his next collection. Donatella demures at first, but gives in. The cameras eat up their fetish-y design. 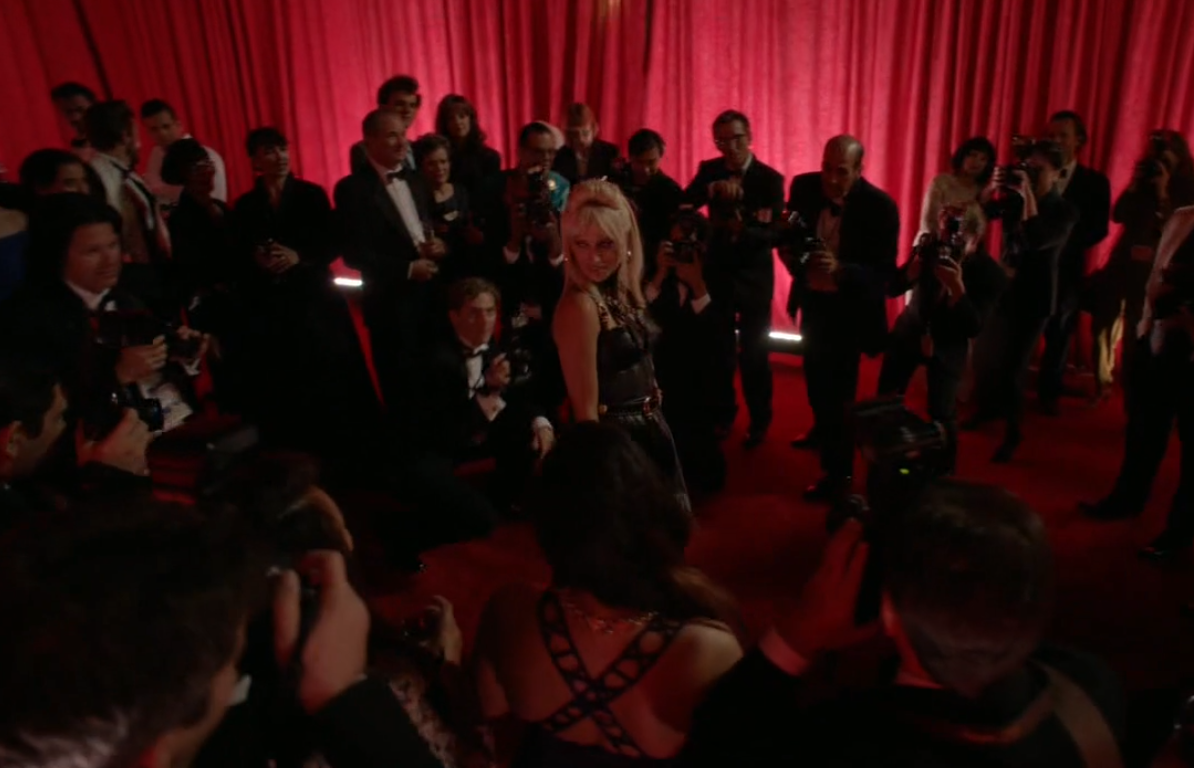 Meanwhile, Cunanan begins tracking high-profile charity events and operas in order to scope out potential older suitors. He zones in on one gentleman, Norman Blachford, and immediately begins seducing him (and his friends), saying "Let's discuss your wants and my terms."

Donatella is met with celebration at her studio — but despite the publicity, sales are down. Donatella conceives of designing a more ready-to-wear version of her bondage look. Gianni is furious, feeling like his artistic integrity is being compromised. His health is obviously deteriorating — he suddenly goes deaf.

Andrew shows off his newfound wealth with friends. He buys a drink for an attractive young blonde at the bar: it's Madson.

Smitten, Madson returns to Cunanan's hotel room. The two bond over stories of lost love, coming out, past melancholies. 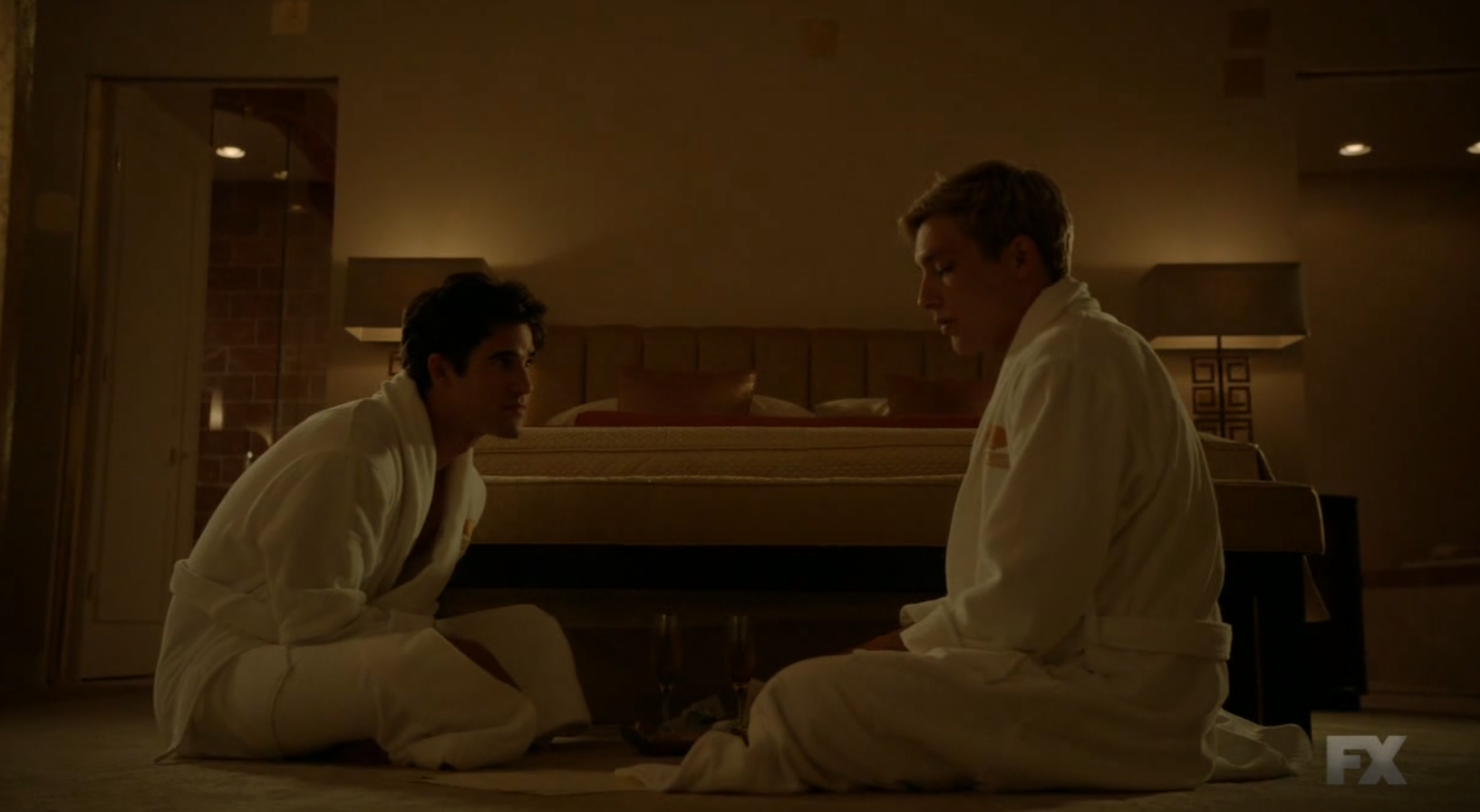 Cunanan's patron, Lincoln Aston, sees the itemized bill from the night and cuts him off.

The next night, Cunanan bizarrely witnesses Aston murdered by someone he was attempting to seduce — specifically, bludgeoned to death in a shockingly graphic scene. Cunanan lets the killer slip by without calling the police. The next day, Andrew meets with his older suitor and explains that police let the murderer go on a gay panic defense.

"You can rob us, you can beat us, you can kill us — and get away with it," replies Andrew.

The next day, Andrew recounts one of Madson's stories to Norman — as if the events had happened to him.

Andrew announces to his mother that he'll be traveling the world (with Versace — another lie). His mother begs Andrew to let her come with him. Andrew refuses before their argument gets physical. He pushes her into a wall and breaks her shoulder blade. She lies to doctors about what happened.

Donatella tells the Versace employees that Gianni is suffering from a rare form of ear cancer. She announces she will be taking over the operations of the business.

Andrew and Norman purchase a house together.

The show's writer, Tom Rob Smith, has discussed his portrayal of Andrew in this duo of episodes.

“I think it’s wrong to think of him as the ‘Talented Mr. Ripley,’” said Smith to Vanity Fair. “Mr. Ripley is someone who is always hustling and is aware that he’s angling things. . . . I think Andrew thought he was a husband or a partner in his own right. I don’t think he understood that he was a hustler, otherwise he would’ve been happy with his lot.”

Andrew's deception in the face of a particularly cruel social milieu has become the show's central throughline: but the extent to which Andrew was deceiving himself remains a large, perhaps unanswerable question. By juxtaposing Andrew with his most famous victim, Murphy's team appears to be commenting, once again, on the lies queer people need(ed) to be legible to society. Blachland's resignation in the face of his friend's murder shows the necessity of those lies, which are used like armor to protect from the indifference of the straight world.

Father Of Two Killed By Suspected Carjacker In LA