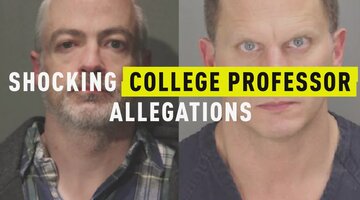 Lawyers for a man accused of trafficking women for his “sex cult” said he's the victim of a government frame-up.

Keith Raniere, co-founder of Albany-based NXIVM, should be released on bail, his lawyers argued in a legal brief filed on Tuesday, because the group, while unconventional, and “bold,” was not a cult and Raniere did not force, coerce or trick women into doing anything.

“Trafficked women don’t spend their money on an Amtrak ticket, ride to Albany, hang out for a few days, buy another Amtrak ticket, and go back home when they want to,” Agnifilo said.

Members of the group were “independent, smart, curious adults” searching “for happiness, fulfillment and meaning,” the brief says, arguing that prosecutors' “attempt to transform a volitional union of free-minded, educated, intelligent, willful, successful adult women into a helpless band of victims is baseless.”

By condemning the group as a criminal sex trafficking enterprise, “the Department of Justice has made itself the morality police,” Raniere's lawyers argue.

According to federal prosecutors, Mack and Raniere used “fraud, force and coercion” to lead a secret group within NXIVM called “DOS” — short for Dominus Obsequious Sororium, Latin for “lord over the obedient female companions.”

Within DOS, there were “masters” and “slaves” — and slaves were required “to perform "acts of care" for their masters and to pay "tribute" to their masters, according to the criminal complaint against Raniere.

Raniere was top master in the group, Mack second-in-command, and some of her slaves were required to serve him, the indictment against them alleges.

But Mack concealed Raniere’s involvement, and recruited women to the group under the “guise of female empowerment,” before starving them “until they fit [Raniere's] sexual feminine ideal,” Assistant U.S. Attorney Moira Kim Penza told Judge Cheryl Pollak at Mack’s arraignment.

Raniere has been held without bail since his March arrest in Mexico, while Mack was released on $5 million bond and house arrest.

The brief by Raniere’s lawyers in support of his request for bail is, in effect, the first draft of the defense strategy.

A spokesperson for Richard P. Donoghue, the U.S. Attorney for the Eastern District of New York, whose office is prosecuting the case, declined to comment on the defense's assertions.

The latest filing gives new, previously undisclosed details about one of the most salacious allegations in the case — the group’s branding ritual.

According to prosecutors, when Mack convinced women to join DOS, she led elaborate group ceremonies marking the occasion, during which she physically restrained inductees while another woman using a laser cauterizing tool branded them with a symbol that included Raniere’s initials.

In their legal brief, Raniere’s lawyers say “several of the women in DOS chose to voluntarily brand themselves,” but assert that their decisions were “absolutely knowing and voluntary, and a product solely and exclusively of their free will.”

“In fact,” the brief discloses, “the woman being branded typically placed the stencil on her body where she wanted the brand to be located.”

“While there may be instances of someone branded who later second-guessed or regretted her decision, the evidence will be clear that the decision was knowing, voluntary and based on free will at the time it was made,” Raniere's lawyers argue.

Prosecutors do not allege that Raniere attended these rituals.

Mack told a reporter for the New York Times Magazine that branding was all her idea, having ridiculed a preliminary proposal for tattoos. “I was like: ‘Y’all, a tattoo? People get drunk and tattooed on their ankle ‘BFF,’ or a tramp stamp. I have two tattoos and they mean nothing,’” Mack said.

A judge’s bail decision is typically centered on whether a particular defendant can be trusted to return to court for trial. In a previous legal filing, prosecutors said Raniere should not be released on bail because he “fled” the United States in November 2017, after the New York Times published a report on the group’s branding ritual.

But in their bail application, Raniere’s lawyers say he actually left the United States before the report was published, in October, because the mother of his child is Mexican and her visa expired. Not wanting to be away from his child, he accompanied her.

“He did not flee to Mexico,” Agnifilo says. “The mother of his child is Mexican, and she had a visa that allowed her to stay in the country until October 14, 2017. He was just trying to comply with immigration laws.”

Raniere’s request for bail states that he agrees to pay to be constantly watched by two armed guards from an agency operated by a former Secret Service Director.

Such an arrangement has been previously approved in criminal prosecutions of high-profile defendants in New York before, such as for Bernard Madoff and Dominique Strauss-Kahn, the legal filing says.

A hearing on the matter is expected, but had not been scheduled as of Thursday morning.

The Man Who Brought Down Keith Raniere's Alleged Cult