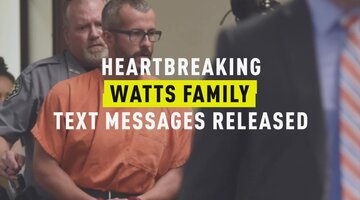 The woman Chris Watts met up with for an “aggressive” extramarital Tinder date before killing his pregnant wife and two young daughters has revealed more details about her one-night tryst with the convicted killer.

The two watched “Shutter Island,” a 2010 Leonardo DiCaprio thriller that centers on a mentally-ill detective who murdered his wife after she killed their children.

Amanda McMahon told investigators she met up with Watts at a Chick-fil-A parking lot after the two made plans for a night of commitment-free sex, according to recently-released court documents.

Watts pleaded guilty in November to murdering his pregnant wife Shannan, 34, and their two daughters, 4-year-old Bella and 3-year-old Celeste.

McMahon detailed more of the couple’s affair to “Inside Edition.” At first, she said Watts “seemed like a genuine guy” and was both “funny” and “charming.” She also said that he told her he was divorced.

They grabbed tacos — and the movie election for a movie is chilling considering how Watts’ case unfolded.

“Shutter Island” is a psychological thriller that takes place in 1954, primarily in the Ashecliffe Hospital for the criminally insane, located on Shutter Island in the Boston Harbor.

DiCaprio’s character, Edward “Teddy” Daniels (pictured above), is a detective trying to get to the bottom of the mysterious disappearance of one of the institution’s patient. As the film cuts back and forth between flashbacks, dream sequences, hallucinations and the present, it is eventually revealed that Daniels is actually a patient at the hospital who was committed for killing his wife; doctors had been trying to break through his mental block of his crimes by playing out an intricate series of events designed to force him to reckon with the truth.

Watts would eventually confess to all of the murders, but he initially told investigators that he killed Shanann in a rage because she killed the girls — causing some to speculate about the links between the film’s plot and Watts’ initial defense.

McMahon said that her and Watts’ relationship would go on to last several weeks. However, she said that had she known the truth about his marital status, she would have never carried on with him.

“It made me feel nasty. It made me feel dirty,” she told Inside Edition. “He was married, he had a wife at home, pregnant, two daughters at home. I know that hurts. I wouldn’t do that to her.”

The first night the met was also the first time they had sex — and McMahon saw a violent side. She had said to investigators that Watts was very “rough” and “aggressive” in the bedroom, acting out a “rape fantasy.”

“The best way I can describe it [is] that he almost zoned out into a different person,” she told “Inside Edition,” adding that he was “very forceful.”

Watts also tried to put his hand around McMahon’s throat, she told “Inside Edition” — chilling for her to remember since Watts killed his wife by choking her.

Calling All True Crime Fans
Oxygen Insider is your all-access pass to never-before-seen content, free digital evidence kits, and much more!
Sign Up for Free
All Posts About
Breaking News
Chris Watts
Related