Attention is turning to a new person amidst drama over Donald Trump Jr.’s divorce: Aubrey O’Day.

The former Danity Kane lead member and reality star is being shamed online for allegedly having an affair with Donald Trump's son, US Weekly reports.

"Another thirsty bitch who slept with a married man....then wrote a song about it? Low class, all trash "Aubrey O'Day". Ok sweetie, your 15 minutes starts...now! Just remember when your 15 minutes is up, you will just be remembered as a thirsty homewrecker. Enjoy that title!!," tweeted one Trump supporter against O'Day.

Another thirsty bitch who slept with a married man....then wrote a song about it? Low class, all trash "Aubrey O'Day". Ok sweetie, your 15 minutes starts...now! Just remember when your 15 minutes is up, you will just be remembered as a thirsty homewrecker. Enjoy that title!!

The affair apparently happened when O'Day and Trump Jr. were filming "Celebrity Apprentice" in 2011.

The news was initially reported by Perez Hilton. Sources told Perez Hilton that Don Jr. pursued the singer aggressively and told her that he was separated at the time. It's unknown whether that was true or not. Perez Hilton reports that Trump Jr. and his wife almost broke up due to the affair.

"Don Jr. was very aggressive, pursuing her, telling her he loved her and that he wanted to be with her," a source told Perez Hilton.

Additional sources confirmed to Us Weekly that the extramarital romance did occur. “Things started up with Aubrey and Don Jr. toward the end of the taping," a source told Us Weekly. 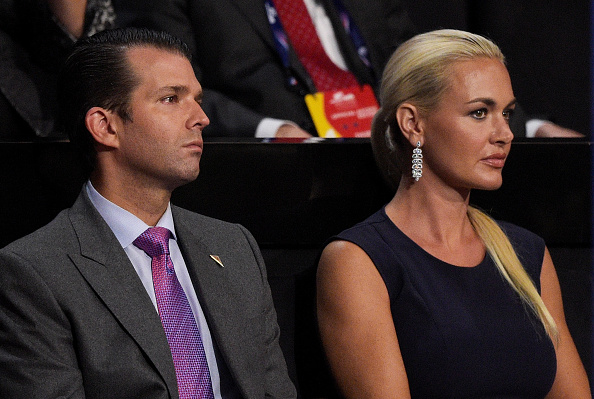 Neither O'Day or Trump Jr. has commented on the allegations of the affair. However, a 2013 track by O'Day called "DJT" has resurfaced with some believing that the song was inspired by "DJT" or "Donald Trump Jr." In the track, man is living a double life. “I’ll always want you and always wonder about it,” a man's voice says. “But it doesn’t matter because I have to stay here.”

On March 15, Vanessa Trump filed for divorce from Trump Jr. in New York City. The couple were married for 12 years and have five children, as The New York Times reported. The couple said at the time that it was amicable.

“After 12 years of marriage, we have decided to go our separate ways,” the couple said in a joint statement. “We will always have tremendous respect for each other and our families. We have five beautiful children together and they remain our top priority. We ask for your privacy during this time.”