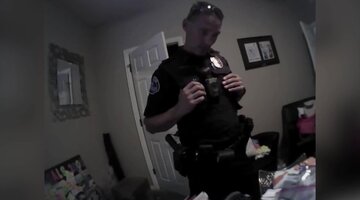 Chris Watts has revealed that he considered taking his own life after he murdered his pregnant wife and two young daughters back in August.

Watts sat down with investigators from the Frederick Police Department, the Colorado Bureau of Investigation and the FBI on Feb. 18 for a five-hour interview, which was released Thursday.

In the recordings, Watts walked authorities through his murder spree, which claimed the lives of his 34-year-old wife Shanann and their two young daughters Bella, 4, and Celeste, 3.

After Watts strangled Shanann to death, he drove Bella and Celeste to an oil field — with Shanann’s corpse on the floorboard of his truck's back seat — and proceeded to smother his two girls, stuff their bodies in separate oil tankers and then bury his wife in a shallow grave.

At one point, investigators asked him about a tank of gasoline that was in his vehicle at the time of the killings.

“I don’t know what was going through my head. I thought I could maybe just get rid of myself at the same time if I was doing all this, honestly,” Watts said. “I didn’t feel like I deserved to live after what happened.”

When asked if he was planning to cause some sort of explosion given all the flammable material at the oil site, Watts explained that he didn’t want his actions to hurt others in the surrounding area. He implied, however, that self-immolation would have been his only option for suicide.

“I don’t have a gun or anything like that,” Watts said, before trailing off. “I don’t know; nothing was right that morning.”

Watts also discussed his decision to plead guilty, saying that he wanted to do what he could to prevent any prolonged suffering and get the proceedings over as quickly as possible. Watts was sentenced in November to life in prison without the possibility of parole for the murder of his family.

“I knew it could only get worse for everybody,” he said.

Investigators asked if his decision had anything to do with the fact that the death penalty was off the table for him. Watts replied that suicide was still on his mind at the time — and that he received suicide tips in jail while he was awaiting trial.

“Honestly when I was sitting in that cell I felt like I should,” he said, speaking about killing himself. “I was listening to everybody tell me, ‘If you do this and this, you can hang yourself in your cell … you can drown yourself in the toilet' … and at one point I was listening to them.”

By September, Watts was under constant suicide surveillance in jail, according to People. This meant he was in his jail cell 23 hours per day, while guards checked on him every 10 to 15 minutes.

“When they put me in that suicide watch cell, the last thing one of those guys said was, ‘Good luck!’” Watts said, adding later that “nothing made sense.”

Chris Watts Would Like To Tell Nichol Kessinger He's Sorry