A Florida teen used a dating app to lure unsuspecting men into robberies and threatened to expose them as predators if they went to authorities, according to police.

Ednita Leon Alamo, 17, allegedly teamed up with her boyfriend Peterson Joachim, 22, and accomplice Shnyder Dumas, 19, in a plot to ensnare lovesick men and force them at gunpoint to drain their bank accounts, the Broward County Sheriff’s Office announced Tuesday.

Leon Alamo, posing as an 21-year-old named Mimi, used the dating app MeetMe to set up dates with at least two men; but when the would-be suitors arrived at what they thought was “Emily’s” home, they were instead met by a trio of masked brutes waving handguns and demanding cash, according to court documents.

The first robbery took place at about 1 a.m. on August 7, when the victim—a doctor—met up with his supposed date at what he thought was her home in Deerfield Beach, Florida, police said.

When he arrived, however, the home was completely empty save for the three men in ski masks, according to a report in the New York Post.

When the mark only turned out to have $15 in cash and some credit cards, the suspects blindfolded him with his white medical coat, forced him into a car and drove him to multiple ATMS, forcing him to withdraw at least $200 in total before finally releasing him at 4 a.m. that morning, the Post reports.

On August 8, one victim, expecting to meet up with “Mimi” at a meeting spot in Deerfield Beach, arrived at the rendezvous-to-be only to be confronted by a group of three or four masked men armed with a knife, police said.

One of the robbers demanded the man’s car keys, and forced the victim, along with Leon Alamo, into the man’s cars and began rifling through his pockets, according to court documents.

The gang swiped the man’s iPhone, a gold chain and his wallet, as Leon Alamo cackled with laughter at her mark’s misfortune, the man told police.

After about a half hour of driving around, the bandits forced the man from his car and revealed to him that Leon Alamo/“Mimi” was just 16, and that any attempt to go to the police would lead to him being arrested for contacting a minor, according to a police report.

Unfortunately for the robbers, the victim did go to police, and was able to identify with 100 percent certainty that Leon Alamo was the woman who had lured him to the scene of the robbery and ridden around with him during the incident, according to a police report.

Using the phone number provided to one of the ill-fated paramours to set up the date, cops traced the crimes back to Leon Alamo, who by late August was already in juvenile detention for a 2016 battery charge, according to the Post. 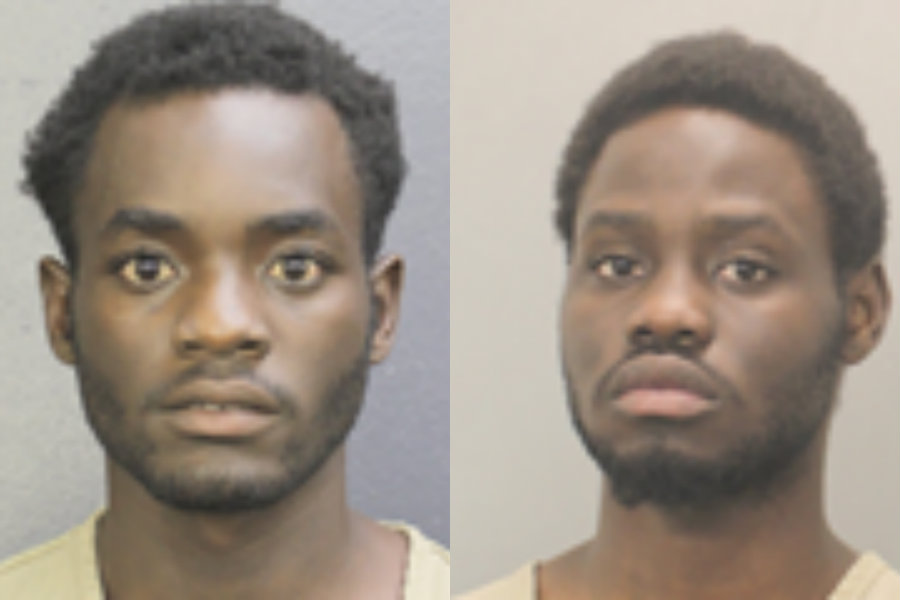 When cops caught up with Leon Alamo, she told investigators that she was the mastermind of the robbery, but also was quick to flip on her co-conspirators, police said.

In an interview with police, she identified two men, whose names were redacted from the police report, along with Dumas (pictured above, left)—whom she knew only as “Black Dog”—and Joachim (pictured above, right), who she said is her boyfriend and the father of her baby, according to a police report.

The trio of suspects were charged with kidnapping, carjacking with a firearm and robbery.

Both men are being held without bail at the Paul Rein Detention Facility in Pompano Beach, Florida, pending trial, according to jail records.

Information about Leon Alamo’s detention was not immediately available.

Police are concerned that the gang may have targeted more people than the two victims they’re aware of, and are encouraging anyone who thinks they may have been targeted as well to come forward. Anyone with information is asked to contact Detective Neil Munson or Detective Robert Sokol at 954-321-4200. Those wishing to remain anonymous may contact Broward Crime Stoppers at 954-493-TIPS (8477) or online at browardcrimestoppers.org. Anonymous tips that lead to an arrest are eligible for a reward of up to $3,000.

'Charmed To Death,' A New Show, Is Coming To Oxygen

Woman Guns Down Boyfriend After She “Smelled Sex” On Him