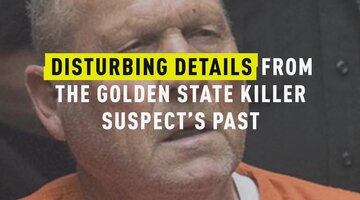 In episode one of the new Los Angeles Times podcast "Man in the Window," Richard Shelby, a retired Sacramento County Sheriff's Department detective, described investigating a 1974 prowler report only to find something that would haunt him for decades.

In the master bedroom of the home, he found a small poodle under the bed, beaten to death and disemboweled. It was a heartbreaking sight: the family pet had half crawled under the bed as if it was trying to get away.

As the podcast ominously stated, it was a sign of what’s to come.

Joseph DeAngelo was arrested last April, after genetic analysis pointed to him as the suspect behind the crimes attributed to the Golden State Killer. He was later linked to crimes attributed to the "East Area Rapist" and "Visalia Ransacker." DeAngelo was charged with 13 murders and 18 of the more than 50 rapes he’s accused of committing. He also allegedly killed several family dogs. Recently, prosecutors from each of the counties in which he is accused of murder said they will seek the death penalty for him, if he is convicted.

His former girlfriend and fiancé, Bonnie Colwell, who the Golden State Killer allegedly referenced during a sexual assault, revealed disturbing details about her romance with the suspected serial killer to the Los Angeles Times.

Among the creepiest of the details she divulged: his alleged killing of animals.

She said she often joined him on illegal hunting trips. Together, they hunted doves with a rifle but that apparently wasn’t enough of a thrill. They trespassed on a fenced-in-property to illegally poach frogs. Colwell said he’d kill deer for fun out of season and claimed she once saw him shoot a vulture out of the sky.

They would often go on motorcycle rides, which could turn terrifying because of his purposefully reckless driving, she recalled. Along their usual route, they'd often whiz by a German shepherd who would run out and snap at the motorcycle. That is until she said DeAngelo stuck out his foot one day, striking the dog and snapping its neck.

As for dove-hunting, DeAngelo didn’t just shoot down the birds. Colwell said he would rip out their insides.

“I just sort of had to throw my trust with him in many situations where I was initially uncomfortable with the choices he made,” she added.

One of DeAngelo’s neighbors from the 1990s claimed that he once left a disturbing message on his family's answering machine threatening to kill their dog.

"It said, 'If you don't shut that dog up, I'll deliver a load of death,'" Grant Gorman, told ABC News not long after DeAngelo’s arrest. "My dad immediately recognized the voice on the message as our next-door neighbor, Joe."

GSK Suspect's Ex Says He Showed Up Armed After Breakup