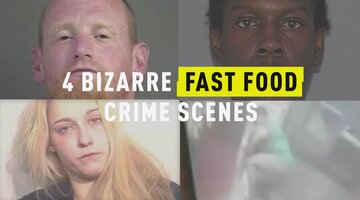 Just how good can one sandwich be?

Popeyes released a new chicken sandwich a few weeks ago — made of fried chicken breast and with pickles, spicy mayo optional — and the sandwich has since prompted long lines, a lawsuit, and now, a gun being drawn on Popeyes employees.

A group of six — two women, three men, and a baby — went to one of the chain’s drive-thru locations in Houston, Texas, on September 3, and tried to order the coveted sandwiches... but the chain was all out.

The group apparently didn’t believe it.

The group allegedly charged at the door of the restaurant, one of the men holding a gun, but a quick-thinking restaurant worker locked them out, KTRK in Houston reports.

The baby was allegedly left inside the group’s vehicle during the chicken-inspired confrontation.

"Somebody could have lost their life because they ran out of chicken sandwiches,” local resident Fredrick Taylor told KTRK.

The group eventually drove off and nobody was harmed. Investigators are currently looking for the culprits.

Over in Tennessee, a Chattanooga man actually filed a lawsuit after a Popeyes ran out of the sandwich.

"I can't get happy; I have this sandwich on my mind. I can't think straight," Craig Barr told the Chattanooga Times Free Press."It just consumes you."

His suit claims the company has hurt him with false advertising and deceptive business practices. It also blames Popeyes for causing him to waste "countless time driving" seeking out the sandwich.

Wanda Lavender, a 38-year-old manager at a Popeyes in Milwaukee, told Vox her legs went numb from standing 10 to 12 hours dealing with the long lines the sandwich has inspired. She said one customer threatened to shoot her staff over the food craze.

The sandwich launched on Aug. 12 and it’s supposed to stick around through the rest of September.

However, it’s sold out.

“Y’all. We love that you love The Sandwich. Unfortunately we’re sold out (for now),” Popeyes tweeted last week.

Calling All True Crime Fans
Oxygen Insider is your all-access pass to never-before-seen content, free digital evidence kits, and much more!
Sign Up for Free
All Posts About
Weird Crimes
Breaking News
Related