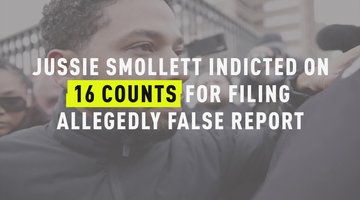 A grand jury in Chicago has indicted "Empire" actor Jussie Smollett on 16 felony counts related to making a false report that he was attacked by two men in Chicago who shouted racial and homophobic slurs.

Smollett was charged on Feb. 20 with one count of disorderly conduct for filing a false police report.

“Jussie Smollett knew that at the time … there was no reasonable ground for believing that such offenses had been committed,” the indictment said, according to CBS 2 Chicago.

Smollett, who is black and gay, told police in late January that he was attacked by two men in downtown Chicago who wrapped a rope around his neck.

Police say Smollett recruited two men to stage the attack because he was upset with his pay on the Fox show. Smollett has denied playing a role in the attack.

Irv Miller, a legal analyst at CBS 2, said Smollett could face probation to up to three years in prison if convicted.

“[The grand jury] decided he told multiple lies,” Miller said, according to the outlet. “There were going to charge him for each.”

“If you have a crime, and that crime has multiple parts to it, you charge all those separate parts.”

Meanwhile, Chicago police say they are conducting an internal investigation to determine the source of information leaked anonymously to media during the probe into Smollett's claims.

Smollett is set to be arraigned March 14, CBS 2 reports.

Suspects In Smollett Case Worked With Him, Lawyer Says