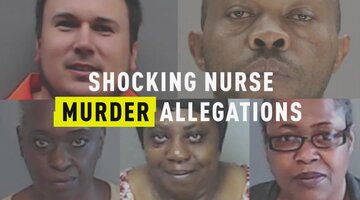 A 36-year-old nurse who was responsible for the care of a woman described as "incapacitated" has been arrested for sexual assault weeks after the woman unexpectedly gave birth.

Nathan Sutherland, a licensed practical nurse formerly employed at the Hacienda HealthCare facility in Phoenix, Arizona, was arrested and booked at the Maricopa County Jail on one count of vulnerable adult abuse and one count of sexual assault, Phoenix Police Chief Jeri Williams said during a press conference on Wednesday. Sutherland was later released on $500,000 bond and ordered to wear an electronic monitoring device, the Associated Press reports. He has not yet entered a plea.

Sutherland, who’d been employed at the health facility since 2011, was responsible for the care of the victim when the assault occurred, police said. After a court order allowed authorities to obtain samples of Sutherland’s DNA, they found that his “matched the baby,” Phoenix Police Sgt. Tommy Thompson said during Wednesday’s news conference. Sutherland was arrested soon after.

Hacienda Healthcare, who fired Sutherland on Wednesday after his arrest, said that they were “troubled beyond words,” the Associated Press reports.

“Once again, we offer an apology and send our deepest sympathies to the client and her family, to the community and to our agency partners at every level,” reads a company statement obtained by the outlet.

The victim, a 29-year-old woman whose identity has been protected, gave birth on Dec. 29. Staff at the facility called 911 to report a baby in distress, and told the dispatcher that they had “no idea” that she was pregnant, the Arizona Republic reports. The caller said that they were “not prepared” for the woman to give birth and reported that the baby, a boy, had begun to turn blue, according to the outlet. A nurse at the facility was able to resuscitate the child, and both mother and child were taken to a nearby hospital to recover.

The case is ongoing and investigators are continuing to gather information, police said on Wednesday. They are working to discover if the victim was assaulted multiple times or if Sutherland victimized anyone else, according to Thompson.

The woman, who had been a patient at the facility since the age of 3, was described in court documents as “incapacitated” and “unable to make any decisions or give consent due to her disability,” according to Arizona Republic.

Her family described her as being intellectually disabled due to seizures she suffered as a child, according to the Associated Press. She is nonverbal, but responds to sound and can move her limbs, head and neck, as well as make facial gestures, the report states.

The woman’s inability to consent led police to launch an investigation into the “deeply disturbing” situation, police said, according to Arizona’s ABC News station.

John Micheaels, the lawyer representing the woman’s family, told the outlet that they were “outraged, traumatized and in shock by the abuse and neglect of their daughter.” While they were not “emotionally ready to make a public statement,” the family did state that their daughter’s child has been “born into a loving family and will be well cared for,” Micheaels said.

Following the birth of the child, Hacienda HealthCare has been the object of intense scrutiny. Two doctors who were in charge of the victim’s care are no longer connected to the facility, with one having resigned and the other having been suspended, Fox News reports.

Bill Timmons resigned as CEO of the facility earlier this month, according to NBC News.

Gary Orman, executive vice president of the board, said last month that the organization was cooperating with the investigation, and that they “will accept nothing less than a full accounting of this absolutely horrifying situation, an unprecedented case that has devastated everyone involved, from the victim and her family to Hacienda staff at every level of our organization,” according to NBC News.