A notorious French criminal and now serial escapee is once again on the run, having busted out of a French prison on Sunday in a helicopter.

Redoine Faid was in the middle of a visit with his brother when a helicopter landed inside the prison bearing masked men armed with automatic weapons and a power grinding tool, according to the Associated Press. The men cut open the steel door to the visiting room, freed Faid and flew away.

“It was a spectacular escape. It was certainly a very well-prepared [prison break]," French Justice Minister Nicole Belloubet said during a news conference Sunday outside the Reau Prison, where the escape occured. The escape took only “a few minutes,” Belloube said, and guards, unarmed, were unable to prevent it.

The helicopter was hijacked by three men at gunpoint from a Paris-area airfield, the Associated Press reports. After the escape, the helicopter was found burned in a northern suburb of Paris. The pilot was released unharmed.

It's the second time Faid has broken out of prison. The first time, in April 2013, he took four guards hostage with a handgun smuggled into the Sequedin prison, then used smuggled explosives to blast through five doors to freedom, escaping in a waiting getaway car with accomplices.

Six weeks later he was arrested hiding out in a hotel and returned to prison, with an additional 10-year sentence. 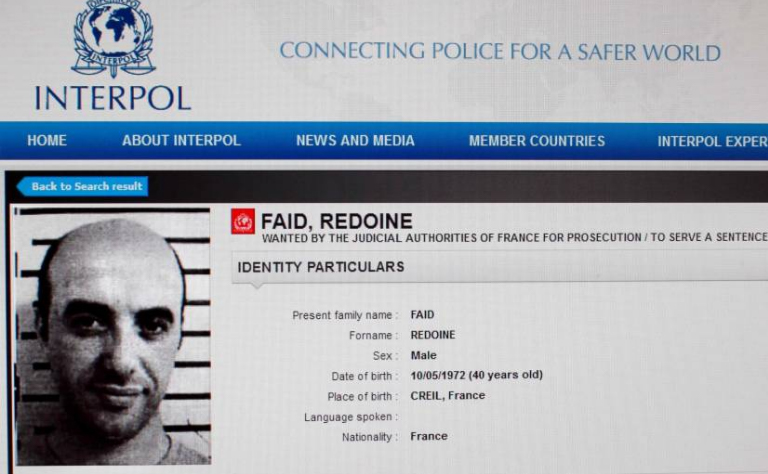 Faid, the son of Algerian immigrants, led a gang in the 1990s that was known for robbing banks and armored cars, among other crimes, according to France 24, a state-owned news network in France. In 1998 he was sentenced to 30 years for eight robberies, but in 2009 he convinced parole authorities he was reformed, and he was released.

That’s when he wrote “Robber: Cities of Crime,” a memoir about his life of crime. Because of this book, Faid is called “the author” by French police.

That same year Faid approached movie producer Michael Mann -- known for “Miami Vice,” “The Last of the Mohicans” and particularly the heist film “Heat” -- at a Paris film festival and told him that, through his movies, Mann had been his “technical adviser, a college teacher, a kind of mentor,” according to a France TV report.

Then he asked Mann if he was “aware that there are gangsters who can draw inspiration from his cinema, since it happened to me”?

Faid went on to become something of a media star in France, sought after for his commentary on France's troubled ghettoes. But, in January 2011, Faid was named as the chief suspect in a botched 2010 armored car robbery during which 26-year-old policewoman Aurelie Fouquet was shot and killed, according to the BBC.

He was never convicted of that crime, but he was arrested in June 2011 and returned to prison for eight years for violating the conditions of his parole, the BBC reported. That’s when he escaped from prison the first time.

Faid was convicted in April by a French court in connection with another heist -- a  2011 armed car robbery in Pas-de-Calais. For this, Faid was sentenced to an additional 25 years in prison, according to Europe 1, a French radio network.