The body of a young boy was found stuffed into a green bag with leather straps, discarded near a California hiking trail, 14 years ago. But cold case detectives with the San Diego Police Department are hoping a new push to identify the boy, referred to as "Baby Doe," could finally provide some answers about what happened to him in his final days.

The body of Baby Doe was discovered May 4, 2004 by hikers along a trail in Rancho Bernardo, according to a statement from police. His skeletal remains were stuffed inside a bag, which also contained several items of clothing. Although there were initially few clues to his identity, police have slowly been able to piece together more details about the boy they believe was born sometime between 1999 and 2001.

Authorities were also able to come up with an image of what they think Baby Doe may have looked like at the time of his death, using a CT image scan of the skull.

"We can usually get an idea of where you were and what you were eating for the past three to five years of your life," Kirsten Verostick, a research graduate assistant with the university's Institute for Forensic Anthropology told the news station, adding that since baby teeth start to grow in utero it can even reveal clues about the mother's location prior to giving birth.

After conducting the testing, investigators now believe the boy's mother was likely living in the southeast United States while she was pregnant, possibly somewhere between Louisiana and North Carolina.

The boy later moved to the Southwest. 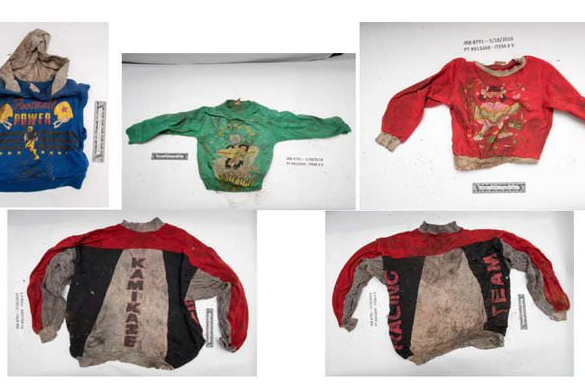 “We are hoping by showing photos of the clothing, someone will either recognize a family member that wore the clothing or can lead us to someone that maybe we can go talk to and help us identify Baby Doe,” Adams told KFMB-TV.

An adult size sweatshirt that said "Kamikaze Racing Team" and an adult-sized green winter coat with black and red paint stains were also found in the bag along with the skeletal remains.

Investigators are asking anyone with information about the case to contact the San Diego Police Department.