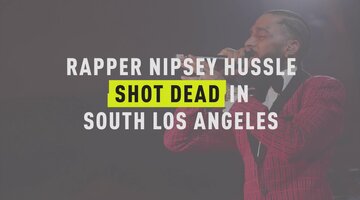 The entertainment industry as well as music fans around the world today are mourning Nipsey Hussle, a man who was not only a force to be reckoned with within the hip hop industry, but who had made a name for himself as an entrepreneur devoted to inspiring positive change.

The Eritrean-American rapper, born Ermias Asghedom, was shot and killed while standing outside of his Marathon Clothing store in south Los Angeles on Sunday. Police have yet to make an arrest, but have identified the suspect as a black man and have asked that anyone with information on the case contact police.

Hussle was 33 years old and left behind two children: a daughter from a previous relationship and a son, whom he and girlfriend Lauren London welcomed in 2016. Hussle released “Victory Lap” last year, his first studio album after a number of critically acclaimed mixtapes, and the release earned him a Grammy nomination for Best Rap Album.

But Hussle was known for much more than his music. To many, especially those from his native south Los Angeles, he was an inspiration and a source of positivity and hope within the community, someone who started out selling his music from the trunk of his car and who went on to provide positive opportunities for the neighborhood he came from.

When it came to giving back to his community, Hussle was a man who wore many, many hats. He owned a barbershop, a fish market, and a burger restaurant, according to the Los Angeles Times, who noted that the rapper also had plans to transform the strip mall where his clothing store was located into a property that would include apartments for low-income families.

World on Wheels, a roller-skating rink and music venue, was known as a safe space in the Los Angeles community before bankruptcy forced the venue’s doors closed in 2013. The rink open again in 2017, thanks to financing from Hussle and other investors, according to the Los Angeles Times.

Among Hussle’s other charitable efforts was Vector 90, a communal, co-working and event space in Los Angeles. The location also doubled as the site of Too Big To Fail, a STEM center (which stands for "science, technology, engineering, math") for local youth, in an effort that Hussle once described as his attempt to create a “bridge between Silicon Valley and the inner city.” Hussle and his business partner Dave Gross, whom Hussle credited with originating the idea, had plans to expand the STEM centers nationally, staring with major cities, “as a resource network across the country.”

Hussle was also a supporter of Destination Crenshaw, a community outdoor art project spanning 1.3 miles and devoted to showcasing black art and culture in Los Angeles. He had a personal stake in creating positive opportunities in south Los Angeles — it’s where he grew up, surrounded by “gang culture,” he once told the Times.

“We dealt with death, with murder. It was like living in a war zone, where people die on these blocks and everybody is a little bit immune to it,” he said. “I guess they call it post-traumatic stress, when you have people that have been at war for such a long time. I think L.A. suffers from that because it's not normal yet we embrace it like it is after a while.”

As an adult, Hussle was committed to helping put an end to gun violence and changing the community he grew up in. He was shot and killed the day before he was set to meet with LAPD Chief Michel Moore and Police Commissioner Steve Soboroff “to talk about ways he could help stop gang violence and help us help kids,” Soboroff confirmed to the Los Angeles Times.

The meeting will still happen — in Hussle’s honor, TMZ reports.

As Hussle’s success grew over the years and he became known not only as an artist but as an entrepreneur and forward thinker, he committed himself to being a positive role model for those who look up to him, explaining to the Los Angeles Times last year how he wanted to use his influence for good.

“In our culture, there’s a narrative that says, ‘Follow the athletes, follow the entertainers,’” he said. “And that’s cool, but there should be something that says, ‘Follow Elon Musk, follow [Mark] Zuckerberg.’ I think that with me being influential as an artist and young and coming from the inner city, it makes sense for me to be one of the people that’s waving that flag.”

With news of Hussle’s passing comes an outpouring of support, with celebs like Rihanna and Drake sharing their condolences, and their shock and pain, on social media.

“My whole energy is just at a low right now hearing this,” Drake wrote. “We just linked for the first time in years and said we were gonna do a new song this summer cause it had been too long. You were having the best run and I was so happy watching from distance fam nobody ever talks down on your name you were a real one to your people and to the rest of us. I’m only doing this here cause I want the world to know I saw you as a man of respect and a don.”

Hundreds gathered at the site of Hussle’s shooting to pay their respects on Monday, according to the Los Angeles Times.

“The man was instrumental in a lot of stuff,” community activist Malik Spellman told the outlet. “Fighting gentrification, trying to stop gang violence.”