An employee at a convenience store in Washington state is on life support after he had a heart attack and collapsed during an altercation with two teen boys, who seemingly left him to die - but not before robbing the store, according to police.

According to the Auburn Police Department, the incident started around 5:41 p.m. on Saturday night when the two teens came into the store with another adult male. One of the teens can be seen in video footage released by police taking something believed to be a pepperoni stick from an area near the register and eating it. He then takes a second stick and gives it to the other teen.

"The adult male then comes to the counter to purchase an item," police said in a statement. "It appears the clerk attempts to charge the adult for the pepperoni sticks and an argument ensues."

One of the teens gives the clerk, identified as Zarif Kelada, a dollar, but Kelada walks around the register and continues to argue with the teens before having "a major medical issue" that sends him collapsing onto the floor into a display of water bottles.

*** Please see update posted on 09/11. All suspects have been identified ***Posted by Auburn WA Police Department on Monday, September 10, 2018

One teen reaches down and appears to take the dollar back, attempts to break into the cash register and then hops over the counter to grab some items from the store before leaving after the other teen and adult man, who left shortly after Kelada collapsed.

A few minutes later the same teen returns, stepping over the unconscious man on his way back to the register, to once again try to get the register open but he is unsuccessful and leaves.

Both teens later return one more time and successfully get the register open, stealing all the money inside before running away. 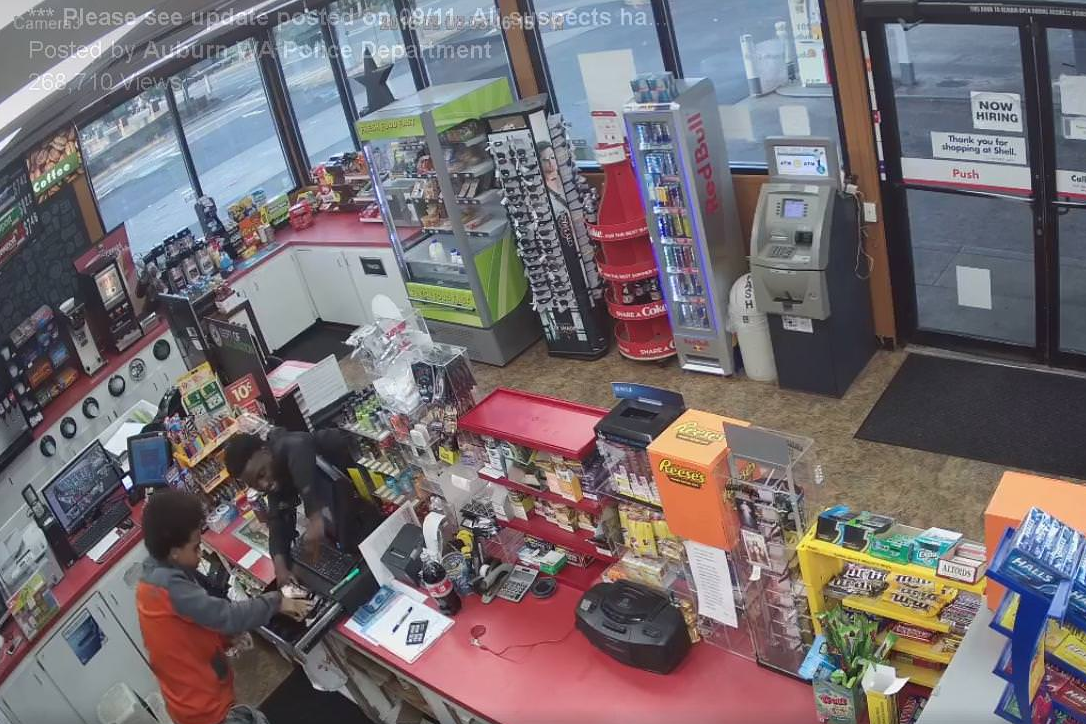 Police said none of the three people who saw Kelada collapse called for her and he wasn't discovered for another three minutes, when a new customer enters the store and immediately called 911, police said.

The Kelada's wife told KOMO News her husband is now fighting for his life and asked the public for payers.

The store's manager, Angela Sharapova, described Kelada as a friendly employee who was also a husband and father to three children.

"It's absolutely heartbreaking," she told the station. "We're just all kind of coping with it—hoping that our guy's going to make it."

She found the video footage showing the teens disregard for her colleague upsetting and hard to watch.

A GoFundMe page was set up to help the family with Kelada's medical expenses.

After releasing the video footage to the public, the Auburn Police said they've identified the adult and two teens who appear in the video. No charges have been announced yet.

Those who know Kelada are now left to wonder what difference it could have made if the clerk was able to receive medical help right after he collapsed.

“This is not something you see very often,” Auburn Police Commander Steve Stocker told Q13. “It really shocks people and makes people wonder when people can be this cold to other people.”

11-Year-Old Boy Attempts To Rob Gas Station At Gunpoint, Rides Off On Skateboard

Baby Of Pregnant Woman Dies 5 Days After Mom Was Shot