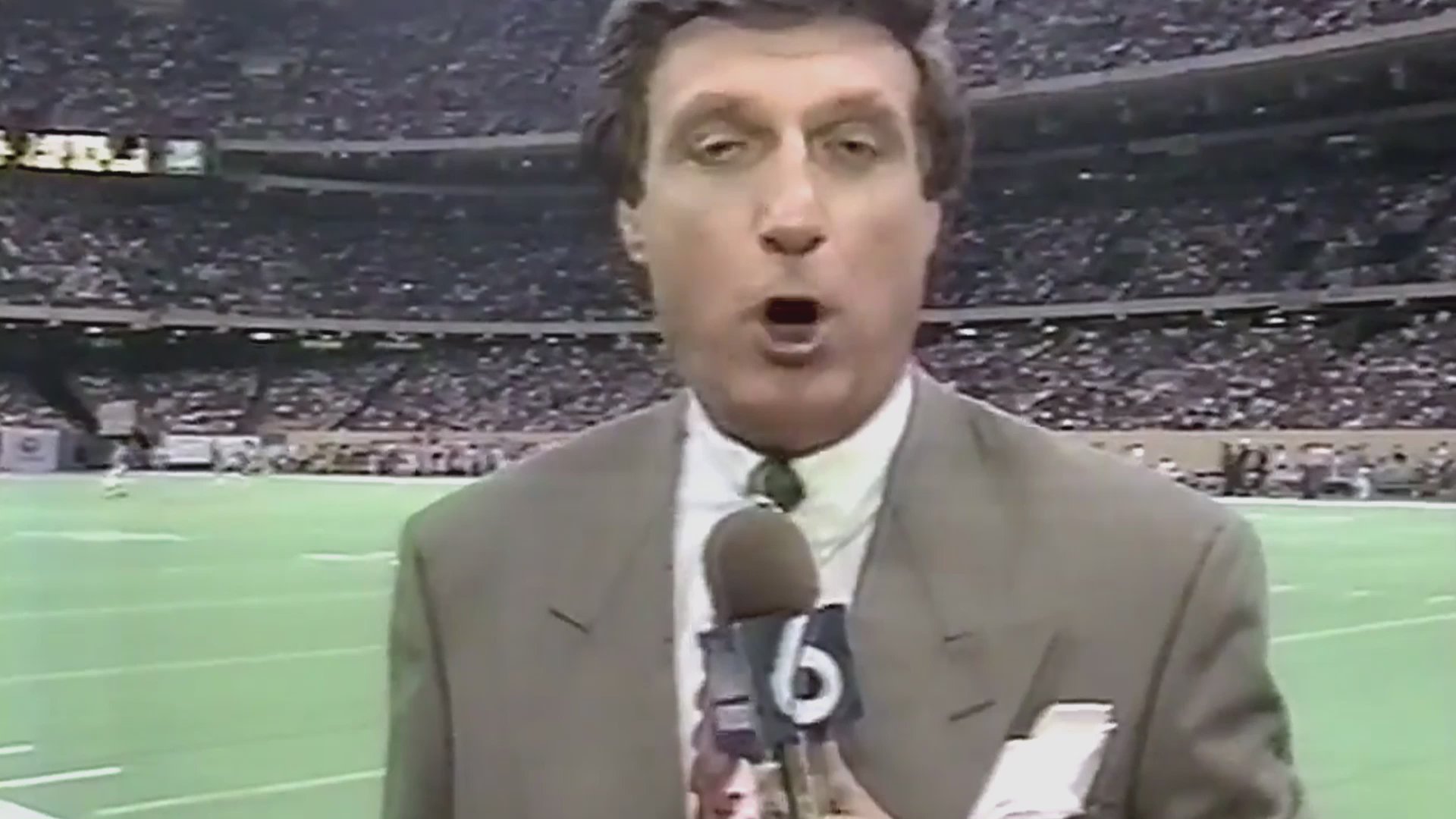 With a big head of wavy hair and an even bigger personality, Vince Marinello was a hometown hero in New Orleans. A local boy done good, he made his name broadcasting Saints games on television and later served as a comforting voice to Hurricane Katrina survivors on the radio. For all his down home appeal, however, Marinello liked being a celebrity. He loved living the high life, even if it was all built on lies. In truth, he didn’t make much money — he lived in a FEMA trailer and his hair was a well-maintained wig. But lies mean a lot when they’re all that you’ve got. They meant so much to Vince Marinello, he would kill in order to keep his lies secret.

Oxygen's "Dying to Belong" chronicles how Marinello's obsession with fame ultimately pushed him to commit murder.

People in New Orleans knew Vincent Marinello was one of their own the second he opened his mouth. A proud son of the city’s working class Ninth Ward, he spoke with its distinctive “Yat” accent, which sounds more like what you’d hear on the streets of Brooklyn than the surrounding South. Marinello came up covering local sports, from horse racing to football, eventually becoming the sports director of NBC-affiliate WDSU in 1992.

“Vince covered the Saints for a long time. Went to training camp, to games, to practice,” fellow sportscaster Ed Daniels told The IND Monthly. “He was very passionate, very good at what he did.”

WDSU went through a management shakeup in 1993, and Marinello was asked to take a pay cut. Instead, he moved over to radio. He eventually found himself at WWL-AM talk radio, mostly covering The New Orleans Saints. It was a living, but didn’t quite have the glamour of being on television. Plus, it didn't pay as well. Marinello’s star was starting to fade, and he was dying for a way to get back in the limelight.

Vince had long been separated from his second wife Andrea Marinello when he met Mississippian Mary Elizabeth Norman Caruso in 2004 at an event he was emceeing for extra cash. Her friends called her “Liz,” and she worked as a respiratory therapist at a children’s hospital. He was 66 and she was 41, but it didn’t matter — at least not at first. They began dating and after just eight months were married in October 2004.

On August 29, 2005, Hurricane Katrina made landfall in Louisiana and would forever change The Crescent City. By August 31, 80 percent of the city was flooded after water breached the levees. WWL was the only local radio station to remain on the air for the duration of the storm and its aftermath. In the thick of it was native son Vince Marinello, comforting survivors with his reporting from home ground. In fact, like so many of his neighbors, Marinello’s house was flooded, and he was soon living inside a FEMA trailer on his own property.

While Katrina was disastrous for the City of New Orleans, it was a boon to Marinello’s career. He felt his star was on the rise again. Unfortunately, his marriage was going in the opposite direction.

“You are cold, sarcastic, selfish, unfair and, in general, you have become aggravating,” he wrote his wife, a year after they were married. According to friends, Vince resented having to compete for Liz’s affections with her young daughter from a previous marriage. According to her mother, Bertha Norman, Liz was angered when she found out Vince was still paying his ex-wife’s expenses. She also discovered that, though they had been separated since 1980, Vince and Andrea weren’t technically divorced until three days after he married Liz. She threatened to go public and reveal that he was a bigamist, and sought to have the marriage annulled. Vince worried the whole messy affair would derail his career comeback.

In the summer of 2006, Liz Marinello filed for divorce. On the afternoon of August 31, she was leaving the office of her therapist, Mary Ann Catalanotto, whom she had begun seeing as a result of "anxiety and depression related to marital problems," according to Catalanotto. Around 4 PM, a man approached her in the parking lot and shot her twice in the face. She was taken to an area hospital and died the following day.

Witnesses described the shooter as "a scruffy old guy," with “wild” hair, “beady” eyes, a beard and a mustache. They saw him leave the scene of the crime on a bicycle, which he later loaded into a white Ford Taurus. It was initially assumed Liz Marinello was the victim of New Orleans skyrocketing crime rate and a robbery gone wrong.

Police tried to contact Vince Marinello to tell him about the shooting, but he was nowhere to be found. Friend and colleague Bob Mitchell eventually reached him at 10:30 that night. After being told of the incident, Marinello asked, “Is she alive or dead?” When police finally spoke to him, Vince told them he had been driving to Mississippi at the time of the shooting to watch a Saints game at the home of an ex-girlfriend. His cell phone data, however, showed that he had been in New Orleans at the time of the shooting. His alibi was further compromised when the woman he was with gave differing accounts of his arrival time.

Within days of Liz’s murder, police had decided it wasn’t a botched robbery, but what Jefferson Parish Sheriff Harry Lee called a “hit.” They learned that in the days and months prior, Marinello had purchased a fake mustache as well as the rare nylon-coated bullets used in the attack. Employees at both stores recognized him immediately, such was his celebrity. He even drove a white Ford Taurus, like the one seen leaving the crime scene.

On September 7, police searched the FEMA trailer Marinello lived in since he and Liz split up. Inside they found a 14-point check list, meticulously detailing the steps to be taken before and after the shooting. "Gun - River on way to MAMA," is one entry on the list, and "Motive - maybe - NOT STRONG," is another. "Clothes - Burn," says another line, which then breaks down such items as gloves, mustache, shoes and shirt. Marinello surrendered to authorities the following day and was booked on second-degree murder charges.

Vince Marinello went on trial for the murder of his wife Liz in December 2008. After a short, two-week trial, it took the jury one hour of deliberations before finding him guilty of second-degree murder on December 13. Following his conviction, a new mugshot was taken of him, now without his signature hairpiece of thick, wavy locks. When it went out to the press, it was the first time most New Orleanians had ever seen him bald.

He was sentenced to life in prison. Five days later, he suffered a heart attack. Upon recuperating, he was sent to the infamous Louisiana State Penitentiary at Angola to serve out his sentence. He is currently 81 years old.