Sign Up for Free to View
The Case Of Marilyn McIntyre 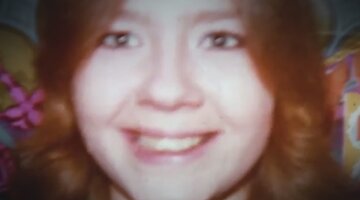 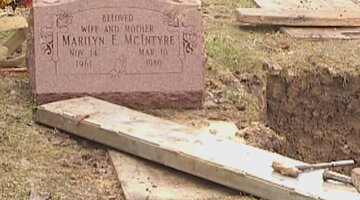 1:44
Preview
Police Exhume The Body Of Marilyn McIntyre For DNA And Clues 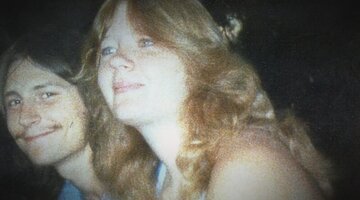 2:12
Preview
The Body of Marilyn McIntyre Is Found

When Lane McIntyre returned home on the morning of March 11, 1980 after an exhausting shift at a local paper plant in Columbus, Wisconsin, he was greeted by a sight that would upend his life forever.

"When I approached the front door, the dog was outside on a chain barking. I thought, 'Well, that’s unusual.' I stepped inside the door and stopped there for awhile not believing what my eyes were seeing. I saw my wife laying on the floor dead and it was like I was in a tunnel," Lane told Oxygen's "Exhumed," airing Sundays at 7/6c and 8/7c on Oxygen.

Marilyn McIntyre, 18, had been killed. A steak knife was sticking out of her chest. After processing the horrific sight before him, Lane rushed to his child's bedroom to ensure their 3-month-old son, Christopher, was safe. After confirming Christoper was okay, Lane, then 23, called his parents and begged them to call police.

After arriving at the scene, police noticed there were no signs of forced entry. Marilyn had seemingly let her attacker into the residence, suggesting it was someone she knew. She had also been strangled and badly beaten — the autopsy determined the steak knife had actually been plunged into her chest postmortem.

“When you see this level of violence, typically it's a crime committed by somebody that knows the victim and has anger toward them for some reason,” Wayne Smith with the Columbia County Sheriff's Department told producers.

Who would be so vicious as to murder an 18-year-old new mom? Who could have such a grudge against Marilyn?

"She was beautiful, she always had a smile on her face. She always saw the good in people," Lane insisted.

Of course, Lane was immediately a person of interest in the case. He denied any involvement and told police he had been at work all night. His time card supported his claim — but Lane also often worked alone and was allowed to take breaks, meaning his alibi wasn't exactly ironclad.

Plus, it seemed like there was a serious financial motive for Lane: Just days before Marilyn was killed, he had taken out a life insurance policy on his wife. Investigators were instantly suspicious.

After talking with a neighbor, who said she was woken up around 3 a.m. after the dog was placed outside and started barking, police had an estimate of when the killing occurred. But with no real forensic evidence recovered from the scene, they didn't have much to go on.

However, while talking with Marilyn's family and social circle, an alternative suspect to Lane emerged. Curtis Forbes, a friend of the couple, was said to be furious with Marilyn because she had encouraged his girlfriend, Debra Attleson, to break up with him. And much like Lane, Forbes had an alibi — but not an airtight one.

Forbes told investigators he he had been out drinking at a bar that night, and had then gone to see a friend named Lori Beattie and her boyfriend at around 1 a.m. Beattie confirmed this story, but said Forbes eventually offered to get beer and never returned. Forbes insisted he had gone back to see Attleson, who said he had indeed spent the night with her — but that he hadn't come over until 4 a.m. There was missing time Forbes couldn't account for.

After speaking with investigators, Forbes fled town. Police were shocked by this bizarre behavior. Yet they still had no hard evidence, and so no arrests were made.

Twenty-seven years passed, with Marilyn's family members contacting police often to see if there was any progress in the case. In 2007, though, her niece contacted the Columbia County Sheriff's office instead of Columbus Police. The detectives there didn't know about this unsolved homicide, and were instantly intrigued. They vowed to reinvestigate, believing with new DNA techniques they could make a break in the case.

Investigators took another look at a strange blood sample found in the bathroom sink at the time. After sending it to a lab for analysis, they discovered it was a mixture of two DNA samples: Marilyn and a mystery person.

Lane volunteered a sample — and it turned out it wasn't his DNA found at the scene, officially exonerating him. Despite years of suspicion following him, he wasn't the murderer. It was bittersweet for Lane, as the rumors about him killing his wife had ruined his reputation in the small town and had even led to an estrangement with his son, the San Diego Tribune reported in 2009.

Investigators set their sights on Forbes, re-interviewing witnesses from the night, who said he was looking for a hookup that night and was continually getting rejected. Detectives theorized that perhaps he went after Marilyn, knowing she was home alone.

Then, a shocking piece of evidence emerged. Beattie eventually came forward and recounted a conversation she had with Attleson, where she told Beattie Forbes asked her to wash his shirt that night because it had blood on it.

"I remember being shocked and uncomfortable with the conversation but I assumed Debbie had told the police," Beattie told producers.

Still, they needed something solid to tie him to the scene of the crime. They made the difficult decision to exhume Marilyn's body to see if any evidence under her fingernails remained since she may have fought back during the attack. Unfortunately, her body was in a severe state of decomposition. Her artificial fingernails remained, but any DNA evidence obtained from them would be unusable.

Luckily, investigators didn't just order an exhumation to find new DNA evidence. They also heavily publicized it, hoping it would rattle the killer into making a wrong move.

"We wanted our suspect to know, you may have escaped for many years but DNA evidence exists and we’re looking for it," Wayne said. "Even though our exhumation didn't yield evidence, we didn't release that to the public. The suspect doesn’t know that evidence isn’t going to be used."

The plan actually worked. Investigators had kept Forbes on surveillance, and found in the months after the exhumation he was contacting a carpenter's union in Hawaii.

"Because of the exhumation, Curtis began hatching a plan to fake his disappearance," prosecutor David Wambach told producers.

Forbes' ultimate plan was to buy an inflatable raft, take a boat out into Lake Michigan and sink it, making it seem like he died in the accident. Meanwhile, he'd take the raft to shore, and escape. Unfortunately for him, police had also re-interviewed Attleson, who indicated she had indeed seen blood on his shirt the morning of the murder. They now had enough probable cause to arrest him.

Even worse for him, a recorded jail phone call between him and Attleson cemented his guilt when he didn't deny having blood on his shirt the night of the murder.

Forbes was charged with first-degree murder. In November 2010, after just three hours of deliberation, the jury delivered their verdict: Guilty. He was sentenced to life in prison.

For more on this case and others like it, watch "Exhumed," airing on Sundays at 7/6c and 8/7c on Oxygen or stream episodes any time on Oxygen.com.

Famous People Who Have Been Exhumed

Why Do Exhumations Happen?