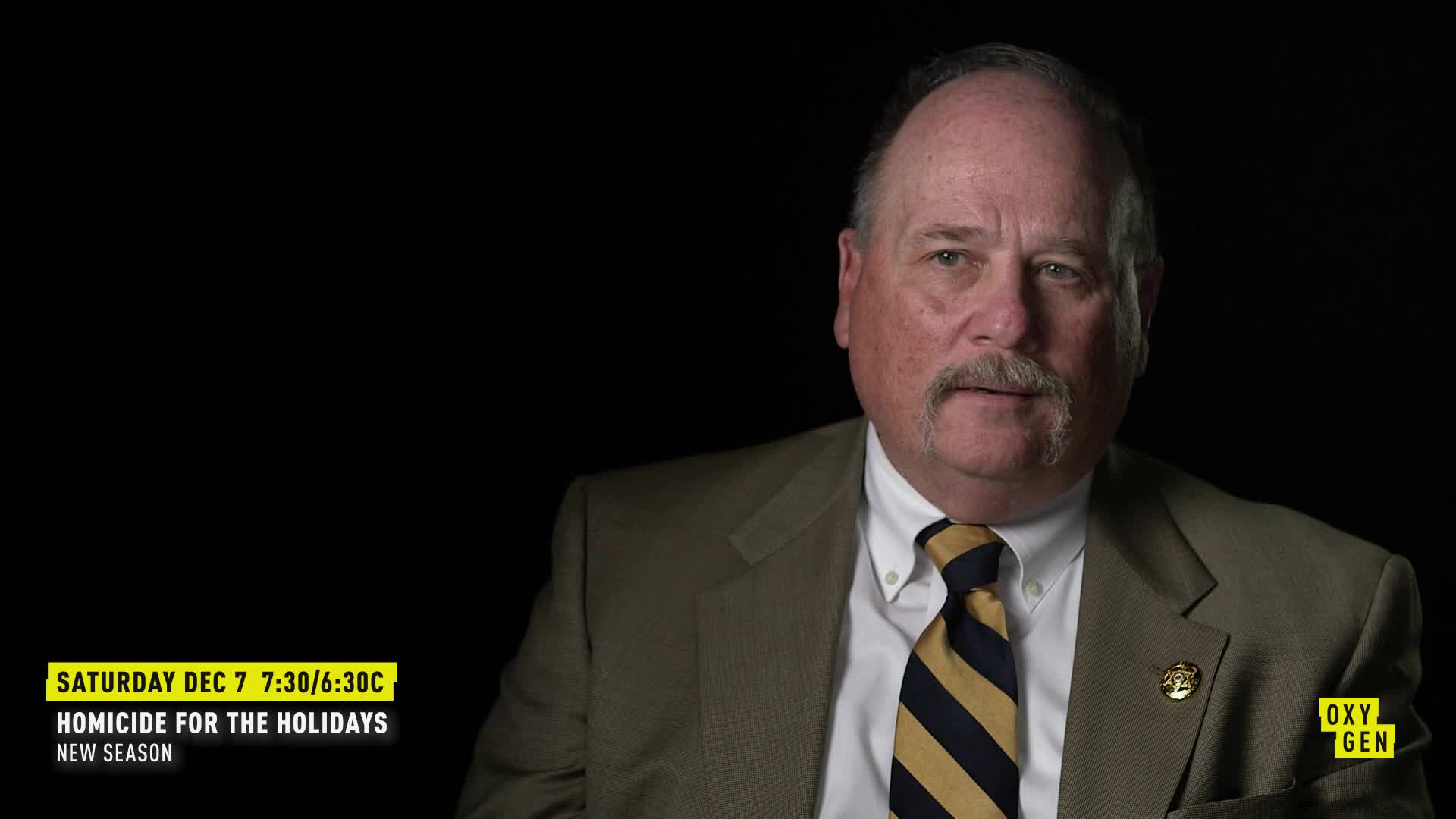 This December, Oxygen brings viewers a fourth round of shocking true stories of holidays turned murderous, with the return of “Homicide for the Holidays,” premiering Saturday, Dec. 7 at 7:30/6:30c.

Each hour-long episode will examine a devastating case and aims to help unveil secrets about the true motive of the killer. With firsthand accounts from people close to the victims, Oxygen’s limited series will delve into the alarming cases that prove the holidays can turn the happiest time of the year upside-down in a split second.

This season’s stories include multiple murders in a town called Santa Claus, where it’s Christmas all year-round; a mother shot in the head in front of her small children on Thanksgiving; and a couple’s first Christmas in Florida that exploded in violence because of infidelity.

In advance of the new season’s premiere, here are the most shocking stories from the last three seasons of “Homicide For The Holidays.”

Christmas was a particularly special time for the Ortega family of Covina, California. Joseph and Alice invited their five adult children and their families to their home for food and fun, including a lively game of poker.

On Christmas Eve 2008, however, the festivities turned into a nightmare, when a man dressed as Santa Claus walked into the house and opened fire with a pair of handguns, as told on “Homicide For The Holidays.”

The home soon went up in flames, prompting 911 calls from the neighbors. One responding fire lieutenant, in conversation with “Homicide For The Holidays,” described the scene as “apocalyptic.”

In the chaos amidst the fire response, authorities were only able to make contact at first with Leticia, who escaped the blaze with her husband and 8-year-old daughter — who had been shot.

Investigating the house after the fire had been put down, authorities found nine bodies, all burned beyond recognition. They were left with little more than a neighbor’s tip about a suspicious vehicle leaving the area around 11:45 p.m.

Meanwhile, in nearby Sylmar, police responded to Brad Pardo’s home, where he had just returned from a Christmas party to find his brother, Bruce, lying dead of a single gunshot wound to the head. A 9mm pistol lay on Bruce’s lap; a second was on the floor.

An investigation later found that Bruce’s recent ex-wife — their divorce was finalized on Dec. 18, 2008 — was an Ortega. Sylvia Ortega was one of the nine killed at the holiday get-together. Her sister, Leticia, survived, and told investigators that she recognized Bruce despite the Santa Claus get-up.

Returning to Brad Pardo’s home that same night, investigators searched Bruce’s car, which was confirmed as the one neighbors saw leaving the area of the Ortega home late at night. It was packed with thousands of rounds of ammunition and a Santa-suit booby trap. Something triggered the trap, engulfing the vehicle in flames, although no one was injured, according to the Press Democrat.

An autopsy showed that Bruce had shot himself. There were pieces of his Santa Suit melted onto his body as well, from when he had torched the Ortega home using a homemade flamethrower at the end of his massacre. The device apparently ignited an open flame elsewhere in the house, causing an explosion.

Thirteen children lost a parent during the massacre. Leticia’s 8-year-old daughter, Katrina, took a bullet to the face, but survived.

In 2016, Leticia told Oprah, “I can’t do anything to change what happened. I can only focus on the future ... I’m not going to allow you to continue to consume us with your evilness. You don’t want that anger to live within you day to day and grow, just like it did with this monster.”

On Dec. 31, 1999, the small Colorado town of Guffey was stunned by a horrific triple-murder.

Tony Dutcher, 15, was waiting for a friend to join him for a sleepover in a lean-to he’d built near his grandparents’ home when two boys his age descended on the property.

One of the boys was Isaac Grimes, who was also 15 years old, and a classmate of Tony’s. He had helped build the lean-to, and Tony had taught him how to shoot a gun, according to the Denver Post. Grimes wasn’t joining his friend for a sleepover, however — he slashed his throat with a knife. Meanwhile, down at the main house, his friend Jonathan Matheny, 17, opened fire with an assault rifle, cutting down Tony’s grandparents, Carl and JoAnna, 60 and 58.

There was more to the New Year’s Eve slaughter than initially seemed, though: Rather than a burglary or home invasion, the murder of the Dutchers was planned out — and the mastermind was miles away when Grimes and Matheny struck.

The two high school sophomores, along with friend Glen Urban, had fallen under the spell of 19-year-old Simon Sue, who was born and raised in the small South American country of Guayana. Sue convinced the boys that he was part of a paramilitary group called Operations and Reconnaissance Agents, and that they should join him, according to the Post.

Their initiation included burglaries Sue pressured them to commit, giving up the money they made from after-school jobs and being forced to watch gruesome, realistic faux-“snuff” movies like the “Faces of Death” series, the Post reported.

Sue trained the boys in moving past motion sensors undetected and breaking and entering, according to the Colorado Springs Independent. He told them that Carl Dutcher was a racist, and thus needed to die, according to the Post.

According to Isaac’s mother, Donna Grimes, Sue convinced the sophomore that if he didn’t do as he was told — up to and including murder — he would have his family killed.

Investigators probed the triple-murder for months until they got a confession out of Grimes, who pointed to Sue as the mastermind, according to the Post. When Sue first spoke with investigators, he called his organization “just a good citizen’s group” and said that he was interested in a law enforcement career.

All four eventually pleaded guilty, with Sue getting 53 years in prison, Matheny 68, Grimes 60 and Urban two for his role, the Post reported.

Charles Dutcher, father of Tony, said at Matheny’s sentencing that the 68 years wasn’t enough, according to the Post.

“Eight hundred years wouldn’t have been enough,” he said. “I think they all should have gotten the death penalty.”

It was Christmas Eve in rural Carnation, Washington, and grandparents Judy and Wayne Anderson were just finishing getting ready for their special holiday dinner. A roast was in the oven. Judy was wrapping presents in a back room.

The elderly couple had no way of knowing they and their family were about to fall prey to a gut-wrenching mass murder.

Judy and Wayne’s daughter, Michele, and her boyfriend, Joseph McEnroe, had been plotting a massacre for weeks. Enraged over money troubles with her brother and parents, Michele had convinced McEnroe they had no choice but to kill her family, according to NBC News.

The bloodthirsty duo arrived early at the Anderson home, both carrying handguns, according to The Seattle Times, a local newspaper. While McEnroe kept Judy distracted in the back of the house, Michele claimed that she confronted her father in the living room and tried to shoot him. When her gun jammed, McEnroe rushed to help, putting a bullet through Wayne’s skull before gunning down his wife, according to The Seattle Times.

Michele and McEnroe proceeded to mop up the grandparents’ blood with towels and rugs, according to NBC. They dragged the bodies to a shed in the backyard, then lay in wait for the rest of the family to arrive, the Times reported.

Michele’s brother, Scott, sister-in-law, Erica, 3-year-old nephew, Nathan, and 5-year-old niece, Olivia, arrived about an hour later, according to the Times. Michele and McEnroe targeted the parents first, shooting Scott and Erica multiple times as they entered the living room.

Erica survived long enough to crawl to the telephone and dial 911, according to local NBC affiliate K5 News. In the few seconds before the line went dead, she could be heard pleading with her attackers: “Not the kids, no!”

McEnroe told detectives that he finished Erica off while she huddled with her children, according to NBC News.

“You don’t have to do this,” she begged him.

“Yes, we do,” he said, before shooting her in the head.

McEnroe told investigators that he apologized to both children before shooting them dead as well.

Michele and McEnroe were arrested shortly after the killings and made full confessions. They pleaded guilty at trial and were both sentenced to life in prison without parole.

It's The Most Dangerous Time Of The Year: Why do Crimes Increase Around The Holidays?