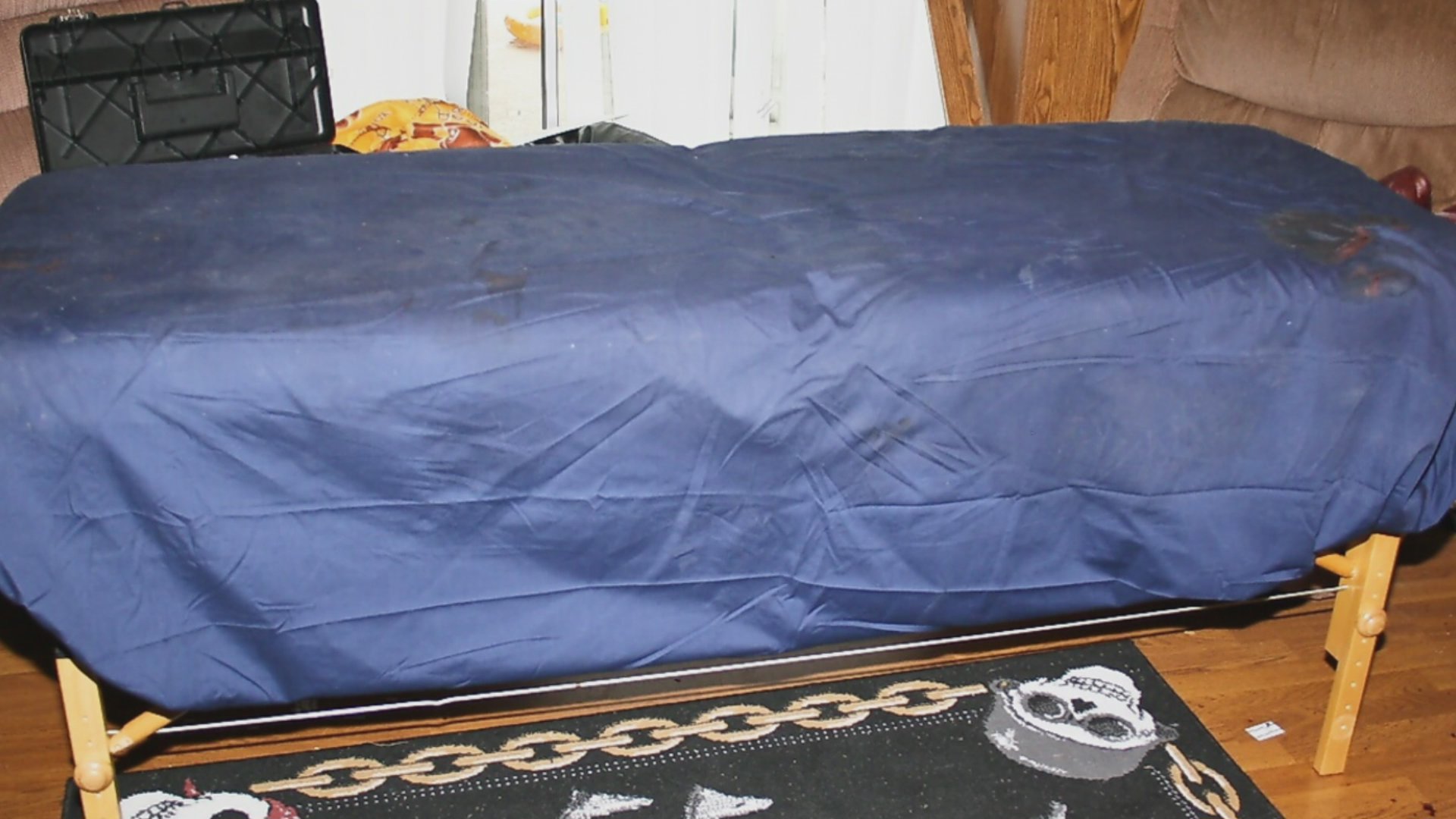 Dennis “Scooter” Abrahamsen was known by friends as a fun-loving biker with an appetite for the fast life. But a night of partying and sex ultimately led to a massage with a not-so happy ending — Abrahamsen’s brutal murder at the hands of a porn-star couple.

On the night of May 15, 2010, Abrahamsen, 41, and two friends, Maynard and Lisa Bindschattel, were hanging at a strip club before heading back to his place in New Port Richey, Florida. Abrahamsen called up a prostitute known as Sunny Dae, and the foursome proceeded to party and have sex in a hot tub throughout the night.

The Bindschattels noticed, however, that Sunny appeared to be constantly checking her cellphone. Eventually, the couple left Scooter and Sunny to themselves — which is when things turned deadly for Abrahamsen.

The following day, Scooter’s cousin went over to his Abrahamsen's house because he wasn’t answering his phone calls, and stumbled upon a horrific crime scene. Face-down on a massage table, Abrahamsen’s body was riddled with stab wounds. There was blood everywhere.

“The back of his head was caved in. It was a very violent death,” Sgt. William Lindsey, of the New Port Richey Police Department, says in a mini-episode of the Oxygen true crime anthology series “In Ice Cold Blood.”

At the scene, police discovered a bloody sledgehammer, knives and the victim’s cellphone.

A police review of Abrahamsen’s phone records turned up a number for the Bindschattels, who described their last interactions with their friend, as well as Sunny Dae’s concerning behavior.

Further investigation showed that text messages Scooter was supposedly sending to Sunny Dae were actually being forwarded to a 26-year-old named Jason Andrews, who had just been brought into Pinellas County Jail on retail theft charges, along with a female named Amanda Logue, 28 — the real name of Sunny Dae.

Under police questioning, Logue said she had left Abrahamsen asleep on the table after giving him a massage, and left in the early-morning hours of May 16.

Without enough hard evidence to hold either of them, police allowed Andrews and Logue to bond out of jail, after which they disappeared. But authorities quickly found another address for Logue up in Georgia — one that she shared with a police officer named Lamon Logue.

But according to Daniel Toner, a detective with the New Port Richey Police Department, Amanda eventually left her police officer husband and moved down to the Tampa area with Andrews to make a living in the adult entertainment industry.

Two weeks after Abrahamsen’s murder, police got a break in the case.

“There was a match for the DNA on the wooden-handled knife we had found [at the scene],” Lindsey says in the In Ice Cold Blood episode. It was from Jason Andrews.

Additionally, a new trove of text messages exchanged between Amanda Logue and Andrews showed them discussing the murder, with her saying things like she couldn’t wait to have sex with him after they did the deed.

“In my career, I’ve never come across somebody talking about getting sexually excited about committing a murder,” Lindsey says.

Almost two months after Abrahamsen was found dead in his home, Logue and Andrews were indicted by a grand jury on first-degree murder charges, according to The Associated Press. The pair were accused of killing Abrahamsen and stealing $6,000 in cash, credit cards and a video camera in what was characterized as a “thrill kill.”

Once Andrews was in custody, he confessed to all the crime’s gruesome details.

“I struck the first time very, very hard. And he would start twitching and I’d strike him again with the hammer,” he can be heard saying in recordings featured in the episode. “I could see the hammer disappearing into the back of his skull.”

Logue and Andrews both pleaded guilty to avoid the death penalty. In January 2012, Andrews was sentenced to life in prison with no parole; months later, Logue was sentenced to 40 years for the same crime.

“I was hoping they’d give them the needle,” Abrahamsen’s friend, Dan Armetta, says in the episode. “It just sickened us, that two people could do such a thing.”