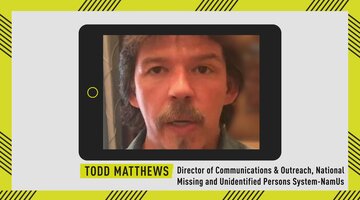 Investigators are searching for a missing Connecticut mother of two after she failed to pick up her children from the bus stop.

Karolina Martinez Vanni, 41, was last seen walking north on Lockwood Avenue from Cove Road around noon Monday, December 9, in Stamford, according to a bulletin from Stamford Police.

Police discovered surveillance footage that captured the missing mom that afternoon, but said nothing appeared to be out of the ordinary.

“We have her boarding a bus. We had her getting off the bus and she seems fine,” Stamford Police Captain Richard Conklin told local station WTIC.

Her family became concerned after Vanni failed to pick up her two children, ages 11 and 13, from the bus stop as she usually did.

“She’s been very steady, very responsible. She has met her two children at the bus stop consistently. Never missed a meeting,” Conklin said.

Vanni’s long-term boyfriend of over 21 years, Roberto Cabrera, told the local station he is baffled by her disappearance.

"Try to find her because she’s a great wife, a great mom and I know she would never leave her daughters behind," he said.

Cabrera, who reported Vanni missing after she failed to pick up the couple’s children, told The Stamford Advocate his girlfriend speaks Spanish but has difficulty with English.

“I have no idea where she would have gone,” he said.

Investigators tried to track the missing mom’s movements Tuesday with bloodhounds, but were thwarted by weather conditions.

Police have said there have been no transactions on her credit cards since she disappeared and her cell phone had been left behind at her home.

Investigators have not ruled out foul play, although they’ve said there is no evidence to suggest that at this point.

Police are asking the public for help finding Vanni. She’s described as approximately 5 feet tall, weighing between 140 and 150 pounds, with brown hair and brown eyes.

"This is odd behavior for her," Conklin told WTIC. "We just want to make sure that she’s safe."

Human Remains Found During Search For Missing Mom Of 2