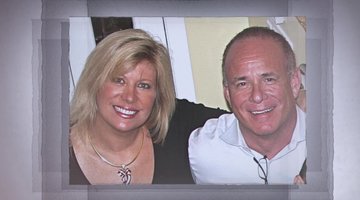 2:42
Exclusive
“Everything About Him Was A Lie”, Lawyer Says About Jim Kauffman 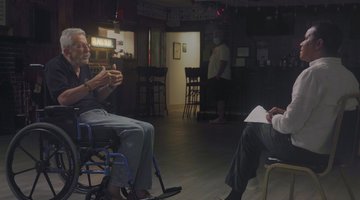 2:37
Exclusive
Was Revenge A Motive in April Kauffman’s Death?

April Kauffman, a New Jersey radio host, was known for being outspoken and opinionated, but was also beloved by her circle. Who would have wanted her killed?

"April could definitely piss people off, but April was April. She had a knack for telling you to go to hell and make you look forward to the trip. She had to ruffle feathers," Dawn Coyle, her childhood friend, explained to Oxygen's "Killer Motive," airing Saturdays at 6/5c on Oxygen.

Shockingly, an investigation into her murder unveiled a criminal enterprise and a duplicitous loved one.

April Kauffman worked as a host for an Atlantic City radio station. She was very active with voluntering with veteran's efforts, so it was no surprise she fell for Jim Kauffman, a doctor who regaled her with tales of being a Green Beret during the Vietnam War. In 2000, Jim became her third husband. The two were something of a power couple in their Linwood, New Jersey community.

“My boss is lying on the floor of her bedroom and she's not answering me,” the Kauffmans' handyman told 911 in audio obtained by "Killer Motive."

When police arrived at the scene, they found April was dead. She had been shot twice. Unfortunately, they couldn't uncover much else from the scene: There were no fingerprints, no shell casings, no sign of forced entry, nothing stolen.

Naturally, detectives first focused on Jim, but he seemingly had an airtight alibi. He had left early that morning for his medical center, and was documented on camera with phone records placing him exactly where he said he was all day. He did mention something that sparked investigators' interest: He suggested they look into the Pagans Motorcycle Club, explaining April likely crossed paths with them during her veteran outreach efforts.

"Basically, in the Pagans Motorcycle Group, women aren't equal to men [...] So they wouldn't view her as being worth very much," Daniel Garrabraint, an FBI agent, explained to "Killer Motive" host Troy Roberts. Detectives considered the possibility April had said something to the wrong person.

However, April's daughter from her first marriage, Kim Pack, was suspicious of someone else entirely: Jim.

"I think they had some really fun times, but the warning signs were there. There was an incident when he actually pushed her down the stairs," Pack told producers of her growing concerns about Jim.

Jim missed a communtiy vigil a month after April's murder, soon brought up dating again, and then sold all of April's possessions without telling Pack. When Pack was notified Jim was eligible for April's $600K life insurance policy, she considered it a possible motive. She hired lawyers and decided to contest the payout.

Her lawyers did find out something shocking: Despite Jim's many stories about the Vietnam War, he had never actually served in the U.S. military.

“I thought he was this war hero. I was so disgusted,” Pack said.

Still, there was no actual evidence connecting Jim to the crime. The investigation stalled for years. But then, an unbelievable turn of events blew the case open.

In 2017, Jim was accused of medical fraud, allegedly ordering unnecessary blood tests and accepting thousands of dollars a month in kickbacks. When authorities came to serve a search warrant at his workplace, Jim came out armed with a gun.

"I'm not going to jail for this!" he yelled as he brandished the gun and threatened suicide, as seen in body-cam footage obtained by "Killer Motive."

After a 45-minute standoff, though, Jim agreed to give himself up. He was arrested for a weapons violation, which allowed investigators access to his phone records. They realized he was in contact with none other than Ferdinand Augello, the head of the Pagans.

Police determined Jim was part of a drug ring and allegedly supplying OxyContin to the Pagans so they could sell it on the street. This gave them a motive for having April murdered: They believed she uncovered her husband's double life and threatened him with divorce and exposure. This gave Jim and Augello both cause to have her killed.

Jim wrote a letter to authorities trying to blame everything on the Pagans. The police, in turn, handed the letter over to the Pagans to show Jim had broken their vow of silence. Members soon came forward admitting Jim was supplying OxyContin and had wanted his wife murdered.

Police believe the actual gunman in April's murder was a member named Francis Mullholland. He died in 2013 of an overdose. Jim and Augello were charged with her murder. Jim died by suicide in his jail cell in January 2018. Augello, meanwhile, was convicted of murder, conspiracy, racketeering, and drug charges in October 2018. He was sentenced to life in prison, plus an additional 30 years.

For more on this case and others like it, watch "Killer Motive," airing Saturdays at 6/5c on Oxygen or stream episodes any time on Oxygen.com.