Sign Up for Free to View
Alphonso Doss Had ‘Glowing’ Military Record, But Alcohol Struggles 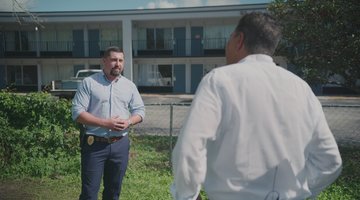 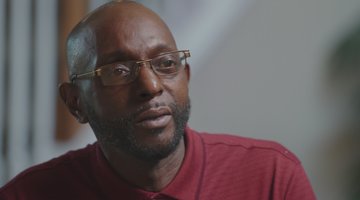 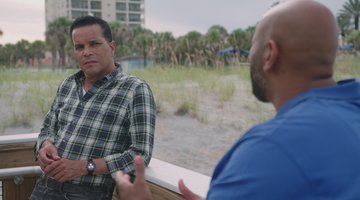 2:00
Exclusive
‘It Was Unbelievable,’ Alphonso Doss’ Friend Says After Murder

After rising through the ranks of the military and shouldering the massive responsibility of questioning 9/11 terrorists at Guantanamo Bay, Navy commander Alphonso Doss’ life came to an abrupt end at an Orange Park, Florida motel.

On February 12, 2014, his wife, Yolinda Doss, arrived at the room he was living in while struggling with alcohol issues and emotional traumas said to be tied to the rigors of his military career. Yolinda had come, she’d said, to bring him to rehab.

Instead, she tripped over his lifeless body and had to call 911.

Orange Park Police Department Sgt. Cody Monroe believed that Alphonso had been dead for 24 to 48 hours before he was found. “We didn't see any obvious signs of what caused his death,” he told “Killer Motive,” airing Saturdays at 6/5c on Oxygen.

Police swabbed the room for DNA and dusted for fingerprints, but neither effort yielded a useful result. As investigators waited for an autopsy report, Yolinda said she believed that Alphonso, 44, had drunk himself to death.

However, they observed Alphonso’s laptop was missing, and Monroe reasoned his death could have been the result of a robbery gone wrong. The victim’s brother and father also suggested the death could be retaliatory in nature and related to Alphonso’s role at Guantanamo Bay.

On February 14, the medical examiner determined that his death was indeed a homicide, and he died from manual strangulation.

“This is an up close and personal way of hurting someone,” Monroe told “Killer Motive” host Troy Roberts. “It is a very personal way to kill.”

The search began for a murderer strong enough to strangle a career Navy man. Three days into the investigation, Alphonso’s brother and father urged investigators to look into Yolinda’s father, Robert Hunter. He had previously been convicted of an attempted murder in a hit-for-hire plan. Hunter claimed that he wasn’t even in Florida when Alphonso was killed, and after a thorough review, the alibi checked out. Investigators also ruled out a murder connected to Guantanamo Bay.

While searching for fresh leads, they focused on surveillance footage from cameras near Alphonso’s motel located at businesses and traffic lights. Although no camera was pointed directly at the victim’s room, police believed that images may have been captured that could provide clues.

As police pored over hours of surveillance footage, they learned that Alphonso had a Navy insurance policy worth $1.2 million, according to “Killer Motive.” Yolinda was the beneficiary, and had inquired about a payout a week after her husband was killed. Lt. Michael Connors, of the Clay County Sheriff’s Office, told producers that she described being in dire straits and needing the money.

During an interview with Yolinda, Monroe got the impression that her marriage was on the rocks even as she claimed that she was never unfaithful to Alphonso. Monroe also observed she was more interested in the insurance payout than progress being made in the murder case. Detectives were suspicious.

Two weeks into the investigation, the painstaking search of surveillance footage delivered a promising lead. A security camera across the street from the motel picked up the grainy image of two men — one very tall, one quite short — entering Alphonso’s room. They were still inside when Alphonso arrived about 45 minutes later. Who were they? Why were they there?

On February 18, investigators interviewed Yolinda again in hopes of determining who the two men in the fuzzy footage were. They asked who she’d been with during the days before the murder. The questioning turned up the name of Anthony Washington, Yolanda’s business partner at Elite Distinctions, a company that specialized in custom paper products.

She eventually revealed that she was in a romantic relationship with Washington, an admission that refuted what she’d earlier stated about being faithful to her husband.

On February 19, Washington was brought in for questioning. Standing 6-feet-7, Washington was a “very intimidating” presence,” said Monroe. His alibi for the day of the murder was that he was at his parents’ home with his friend Ronnie Wilson.

Investigators brought Wilson for questioning a day later. Wilson, who stood 5-feet-6, confirmed he was with Washington on the day of the murder. He also said that he worked with Yolinda and was living in her house. Yolinda’s failure to mention that Wilson was her roommate raised a red flag.

Investigators believed that Washington and Wilson could be the men in the grainy video. They dug deeper into their mutual alibi and found Washington’s cell phone wasn’t pinging off a tower close to his parents’ home on the day of the murder — but instead one near Alphonso’s motel.

On May 8, they brought Washington in for an interrogation. At this point their evidence was circumstantial, they acknowledged, and they hoped to get a confession.

They were successful: Washington eventually cracked. He told investigators that he went to the motel with Wilson to scare Alphonso, who, according to Yolinda, was abusing her. Washington cared for Yolinda, so he stepped up to intervene. Motel cameras showed that Yolinda had keys made for the room earlier on the day of the murder that gave the men access to the room.

According to Washington, Alphonso was drunk and took a swing at him and chucked a liquor bottle as well. The towering suspect said he defended himself and picked up Alphonso by the throat and held him aloft. He eventually tossed him to the floor. Alphonso never got up.

A closer look at surveillance video caught Yolinda’s car across the street from her husband’s hotel on the day he was killed. Detectives believed that she was acting as lookout. After an eight-hour interrogation, she admitted she played that part, said Connors. In a taped interview obtained by “Killer Motive,” Yolinda insisted she only wanted Washington and Wilson to talk to her husband.

In August 2014, six months after the murder, Yolinda, 44, Washington, 29, and Wilson, 33, were indicted. After a four-day trial, Washington was found guilty of first-degree murder and sentenced to life in prison. Wilson pleaded guilty to being an accessory to murder and received a four-year sentence.

Prosecutors lacked sufficient evidence to show that Yolinda, 47, masterminded a  murder-for-hire. Instead, she pleaded guilty to manslaughter and was sentenced to 12 years in prison.

To learn more about the case, watch “Killer Motive,” airing Saturdays at 6/5c on Oxygen, or stream episodes on Oxygen.com.