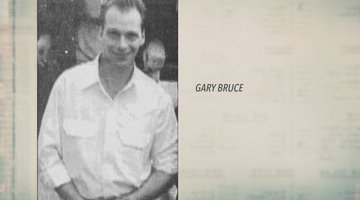 On the night of January 16, 1991, a residential blaze was reported in Camden, Tennessee. By the time firefighters arrived at the scene, the house was fully engulfed and allowed to burn itself out.

The next day, officials sifted through the charred rubble, and cadaver dogs called in to search the scene discovered the remains of two people mixed in with remnants of couch springs.

The remains, found in the center of the living room, suggested that the victims didn’t attempt to escape the inferno. Instead, they stayed put and were devoured by the flames. Why would they do that?

Investigators told “Killer Siblings,” airing Saturdays at 6/5c on Oxygen, that there were two likely explanations: 1) They were restrained and couldn’t move. 2) They were dead before the fire started.

The latter explanation turned out to be the case.

Following further analysis, detectives found that an accelerant was used to fuel the flames. Investigators also confirmed that the remains found at the scene were those of homeowner Danny Vine, a local businessman, and his girlfriend, Della Thornton.

Both Vine and Thornton, detectives discovered, had been shot in the head execution-style. A .38 caliber handgun was used in the murders. The investigation to discover who would murder the pair in such a vicious way was on.

Officials dug into Vine’s background, and learned that he was a successful mussel-shell diver. Because buying and selling mussel shells is a cash business, Vine was known to carry large sums of money. At the time of his death, Vine was believed to have had $30,000 in his possession.

Vine’s stolen truck was found abandoned not far from the crime scene, but the truck was wiped clean. The trailer hooked to the vehicle that had been filled with valuable shells was empty.

Investigators knew mussel shell buying and selling was a small world, so there was a short list of possible suspects.

Evidence directed investigators to speak with Kathleen Bruce, a local mother whose sons, Gary, Robert, J.C., and Jerry, were known for their histories of violence and criminal activity that included theft, assault, and more major crimes: J.C. was convicted in 1975 for raping and strangling a 15-year-old girl. After a few years behind bars, J.C. was pardoned by Tennessee governor Ray Blanton.

Two days after the murders of Vine and Thornton, officials interviewed the Bruce family. They all provided alibis for each other, maintaining that they’d been playing pool together at the time of the double homicide and fire. But it didn’t take long for officials to poke holes in those claims, Matthew Stowe, district attorney for the 24th District that includes Benton County, told "Killer Siblings."

But while the service station proprietor was a promising witness, he became unwilling to talk to detectives after it appeared that the Bruces had began to intimidate him.

Although the Bruce brothers emerged as the prime suspects, progress on the case moved slowly. A year later, investigators got a much-needed lead from an unexpected source: J.C.’s onetime girlfriend, Sheila Bradford, who had a 15-year-old daughter, Kristie.

Sheila Bradford “wanted protection in exchange for information” about a brutal double murder, according to a Fox17 report in 2018.

She met secretly with officials from Benton County Sheriff Department and Tennessee Bureau of Investigation at a local restaurant. Authorities parked out of sight to keep the meeting covert.

As Bradford spoke with authorities, there was an explosion at the business adjacent to the meeting place. Bradford was convinced J.C. knew that she was talking to authorities. Two days later, Bradford, who’d sought refuge at her sister’s home, went missing. She has never been seen since, according to "Killer Siblings."

Two years after Vine and Thornton’s murder, the Benton County Sheriff got a tip that proved to be a big break in the case. They learned that Gary Bruce went target shooting and the precise place he did that. He would use a tree as a target. After securing a warrant, authorities removed bullet-ridden areas of the tree and sent the evidence to a crime lab for analysis. Bullets in the tree matched ones that had been fired into Vine’s skull.

Which Bruce brother — Gary, Jerry, or Robert — pulled the trigger and killed Vine still was unclear.

In January 1993, answers finally emerged after a task force was formed and witnesses were able to speak to authorities outside of Camden. The distance helped ease witnesses’ fears about being stalked by the Bruces for cooperating with authorities.

One witness came forward and reported that Gary had said Vine was a coward and looked away when Gary shot the mussel-shell businessman, but Thornton looked him right in the eye. It was information the police needed.

Eventually, the events leading up to the murder and fire came into focus, authorities told producers. The Bruce brothers were going broke. They knew that Vine was often flush with cash, so the plan was to rob Vine. Thornton arrived midway through the robbery, and the couple was killed.

In the fall of 1993, three Bruce brothers — Robert, Jerry, and Gary — were indicted for the murders of Vine and Thornton as well as for robbery and arson. J.C. Bruce wasn’t tied to the double murder.

In 1995, Robert and Jerry Lee Bruce were convicted in federal court and received mandatory life sentences without parole for the murders. Their mother, Kathleen Bruce, was also sentenced to eight years for conspiring to obstruct justice and intimidating a trial witness.

Gary Bruce continued to evade justice for a little while longer after he made a prison break. Fourteen months after he escaped, though, Gary was captured in Nashville following a search by the FBI and US Marshals. In 1996, he was sentenced to life in prison, plus 10 years for his escape.

Sheila Bradford’s disappearance remains unsolved. The governor of Tennessee announced a $10,000 reward from the state for information leading to the apprehension, arrest, and conviction of the person or persons responsible for the disappearance of Bradford. Anyone with information about this crime is encouraged to call the Tennessee Bureau of Investigation at 1-800-TBI-FIND.

To learn more about the case, watch “Killer Siblings,” airing Saturdays at 6/5c on Oxygen, or stream episodes on Oxygen.com.