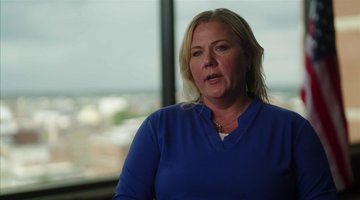 1:42
Exclusive
“I Want to Do the Right Thing,” Killer Says

It was just two hours before sunset on Jan. 15, 2017 when a 911 operator in Greene County, Ohio got a call about an injured woman lying at the edge of a driveway in Yellow Springs, about 15 miles outside Dayton.

"I can see blood coming out of the side of her head," the caller said. "It does not look like she’s breathing."

The Greene County Sheriff's Office responded shortly after that 3:30 p.m. call and could see that the victim, later determined to be Sherri Mendenhall, 63, was already gone.

"There is a lot of blood," Greene County Detective Warren Hensley told "Killer Siblings, airing Fridays at 8/7c on Oxygen. "She’s got an obvious head wound."

The driveway in which she was found led to a side-by-side duplex apartment over a carport and small art gallery. When law enforcement went up the stairs to the apartment level, they could see that the door to the right-hand apartment was open.

"They went in in an effort to clear the apartment," Greene County Detective Kelly Edwards said, "to make sure there wasn’t an active shooter or somebody else needing assistance."

Instead, the police found the body of a man in the back bedroom, later determined to be William "Skip" Brown, 44. He had been shot several times.

They called for back-up, and by the time agents from the Ohio Bureau of Criminal Investigation arrived, it was already starting to get dark. They started with Mendenhall's body, and noticed something right away.

Brown was lying near the foot of his bed with multiple gunshot wounds; investigators noticed a spent shotgun shell in the hall outside the bedroom, and three .9mm bullet casings on the floor of the bedroom — one of which turned out to have unknown male DNA on it. Shotgun pellets had hit the headboard, mattress, and floor; there was blood spatter on the walls and into the closet just beyond the foot of the bed.

He had four gunshot wounds to the chest; the coroner eventually determined that two were from a shotgun and two were from the .9mm.

Mendenhall's apartment, though, was completely undisturbed, as was the art gallery that Brown maintained on the first floor of the building, which was mostly dedicated to the work of his grandfather, the photographer Axel Bahnsen. (Brown was also an amateur photographer himself, though he made his living through the roofing business he owned.)

But because of the art gallery and some reported thefts on the property, Brown had installed an extensive camera system. On it, investigators were able to see video of the moment Sherri Mendenhall was killed.

The man was described as a tall, thin, white man carrying a black pistol — but his face wasn't visible because the cameras were in night mode. It was the only evidence of the perpetrators on the video system, indicating to investigators that whomever had orchestrated the murders knew about the system.

Investigators were able to determine one more thing from the video of Mendenhall's murder: The shot that killed her had to have come from the roof of the carport — 25 yards away from where she fell, and 10 to 12 feet above the ground outside the doors to the two apartments.

"It was one shot fired and killed her possibly instantly," Ohio BCI Special Agent David Hornyak said. "It seemed like a heckuva shot."

Given the viciousness of the 3:00 a.m. attack on Skip Brown, investigators decided he must have been the intended target, and began looking into current and former employees and associates of his roofing business.

Among those former employees was Brown's step-nephew, Dustin Merrick, 25.  Another contractor told investigators that Brown had referred to Dustin as his "right hand man" and indicated that he was integral to the business — which is why he was surprised that Dustin was no longer working there.

Investigators learned that Brown had hired Dustin to help "him get back on his feet" after some troubles, but had to fire him in the fall before the murders.

"Dustin believed that Skip owed him about $400 for back pay at the time that he was fired," said Edwards.

In an initial interview Hornyak and Edwards conducted with Dustin on Jan. 20, 2017, he indicated that his younger brother, Bret Merrick, 24, had been at his place the night of the murders and stayed over after the two had been painting that night. He said Brown had fired him for asking for more standard 9-5 hours, but that was "kinda the way he was."

Dustin provided a DNA sample upon request for "elimination purposes" and, when questioned about some National Rifle Association certificates on display in the home, admitted that he had a concealed carry permit for a .9mm handgun and also owned a .22 caliber rifle and a "Chinese birdshot gun" (a shotgun of Chinese manufacture).

Dustin volunteered to let investigators remove the shotgun for analysis and allowed Hornyak to examine the .9mm handgun, the magazine of which held 12 rounds; fully loaded, with a bullet in the chamber, the gun normally held 13 rounds. But when Hornyak cleared the weapon, there were only nine bullets in it — four shy of full. Hornyak and Edwards both realized that, since there were 4 spent .9mm casings at the scene, they might be holding the murder weapon.

Since Bret was his brother's only alibi and the brothers were known to be close, investigators suspected that it was Bret on the surveillance video from the crime scene — especially since he was taller and thinner than his older brother.

So, on Jan. 24, 2017 — less than 10 days after the murder — a Greene County Sheriffs Office SWAT team arrested Dustin Merrick while Hagaman and another detective asked Bret Merrick to come into the Xenia Police Department for a voluntary interview.

Hagaman had what he termed a "relaxed conversation" about Skip Brown — until Hagaman told Bret that his brother has been arrested in the murder. At that point, Edwards and Hornyak took over the interview and Edwards lied to Bret, trying to convince him that Dustin had told police that Bret had been the main shooter at Skip Brown's house the night of the murders.

Though he initially didn't believe it, Edwards was so convincing that Dustin had implicated Bret that the latter folded, telling Edwards and Hornyak, "F--k that guy."

He then gave police a confession.

According to Bret, he did go over to Dustin's house around 9:00 p.m. on Jan. 14 to paint — but his brother was already drunk when he arrived. They painted and drank until well past midnight, when Bret heard the door open and close and went outside to see Dustin getting into his car.

"He’s just talking about work: 'Got to get this done, it’s very important,'" Bret told Edwards and Hornyak. "I knew he was angry…. I thought he was going to threaten Skip."

The two men climbed onto the roof of the carport to avoid Skip Brown's security cameras and entered his unlocked apartment. Bret said he hid in the kitchen behind a wall to protect his brother and watched Dustin advance on Skip Brown's bedroom before hearing gunshots.

Bret claimed he then fired into the door to scare Sheri Mendenhall, who ran down the stairs towards the street. Dustin, he said, emerged from the bedroom and gave chase.

"Dustin takes the pistol, and shoots it, and she falls," he said. "He was afraid that she knew who he was."

After his confession, Bret Merrick was arrested for the murders of Sherri Mendenhall and Skip Brown and investigators conducted a warranted search of his place, where they recovered his cell phone. On it, recorded shortly after the murders, was Bret Merrick sing-rapping.

"I always talk a big game but I really never thought I could do it," he half-croons in the recording. "When it comes time to prove it, it turns out I really overdo it."

“Very crazy," explained Edwards. "Bret had made a song singing about the homicides. You can’t do this and not have some evil in you."

Dustin Merrick, smiling, pleaded guilty to two counts of aggravated murder, two counts of aggravated burglary, one count of felony tampering with evidence, and one count of felony obstruction of justice. He was was sentenced to life without the possibility of parole for the murders, with a concurrent 11-year sentence on the burglary charges and three years for each of the other charges. Bret Merrick pleaded guilty to two counts of involuntary manslaughter and was sentenced to 25 years. He is not eligible for parole until 2042 — which is also when his sentence ends.

For more on this case and others like it, watch "Killer Siblings, airing Fridays at 8/7c on Oxygen, or stream episodes here.