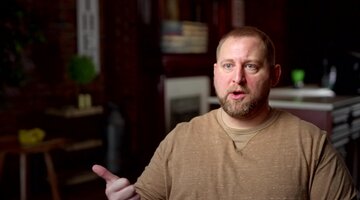 2:58
Preview
A First Look at the Life of Tim Boczkowski 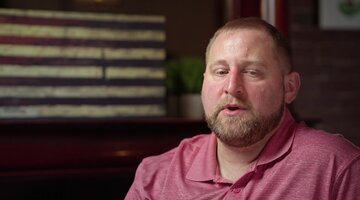 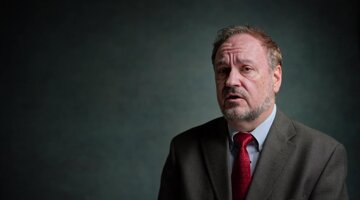 On November 4, 1990, businessman Timothy Boczkowski, 34, called 911 about his wife, Elaine. He told the dispatcher that he had found her unresponsive in a bathtub in their Greensboro, North Carolina home.

“By the time she came to the ER, she was already gone,” Steve Goode, a former police officer with the Greensboro PD, told “Living with a Serial Killer,” airing Saturdays at 9/8c on Oxygen.

Tim told the officer that Elaine “was basically a lush” and that he had found her submerged in the tub, said Goode. While he observed no odor of alcohol on Elaine, Goode did see a suspicious track mark across her abdomen. Another red flag was raised when investigators found that the tub Elaine was in was bone dry. It was empty except for a washcloth and vomit. Tim said Elaine threw up when he tried to give her CPR.

Goode confirmed that there was a track on the tub for a sliding glass door. Could Tim have forced his wife down on that track, causing the telltale mark on her lifeless body?

Police suspected as much. They banked on Elaine’s autopsy to illuminate what happened to her in her final moments. While awaiting that report, they looked into the couple’s history.

They learned that both the Boczkowski marriage and their ice cream business were crumbling. Tim had taken out a $25,000 life insurance policy on his wife, so investigators considered money as a motive for murder.

Meanwhile, the Boczkowski children, including then-6-year-old Todd, grappled with the loss.

“I had no understanding of death,” he told producers.

On November 13, Elaine’s autopsy report showed that Tim’s version of the events didn’t square. He said she was drunk, but there was no alcohol in her system. He said he found her underwater, but the condition of her lungs refuted that claim. But analysis of Elaine's lungs to determine asphyxiation by drowning was inconclusive. Her cause of death was deemed “undetermined.” That effectively ended the case.

With the $25,000 insurance payout in his hand, Tim moved with his three kids to Pittsburgh. He was free to pick up the pieces of his life, according to the book, “Please Don’t Kill Mommy!”

About a year after Elaine’s death, he met Maryann Ross at a church singles event. They married in 1994.

“It felt like a new beginning … a new life,” said Todd. But the family would soon face another dark turn of events.

On November 7, 1994, Boczkowski called 911 and told dispatchers he found Maryann unconscious in their hot tub.

“I’m trying to get her out of the water,” he is heard saying in audio of the taped call, obtained by "Living With A Serial Killer."

“I remember running around to the back of the house and finding the victim lying on the deck in her bathing suit,” said Bill Barratt, a retired police sergeant with the Ross Township PD. “Unfortunately, she was absolutely deceased.”

“I hope they don’t try to pin this on me,” Boczkowski said to Barratt that night. The comment struck the officer as very peculiar, if not a veiled admission of guilt.

Barratt soon learned that Maryann’s death mirrored Elaine’s. When questioned by police, Boczkowski claimed that Maryann had been drinking heavily. The scene said otherwise: There were no cans or bottles found near the hot tub.

Police became more suspicious when they noticed deep scratch marks on his neck. Boczkowski claimed that his wife had given him “a scratch massage,” but officers believed it was a potential indicator Maryann fought for her life.

Boczkowski agreed to take a polygraph test, which he failed. The test administrator said, “There’s no doubt in my mind he killed his wife,” according to Gary Waters, a retired police lieutenant with Ross Township PD.

Still, detectives had to wait for results from Maryann’s autopsy to establish how she died.

At the Boczkowski home, once again, three children had to deal with death.

“I had no reason not to believe what my dad was telling me,” said Todd.

But investigators had doubts. Two women who had supposedly been drinking had both drowned. There was another striking similarity: Maryann had a $100,000 insurance policy. Boczkowski had used cash from wedding gifts to buy it, according to “Living with a Serial Killer.”

A week after Maryann’s death, her autopsy revealed her cause of death to be asphyxiation by manual strangulation.

“You can’t strangle yourself,” said Barratt.

On November 16, 1994, Boczkowski was charged with Maryann’s murder. As they built their case, Pittsburgh investigators contacted officials in Greensboro. They learned that Todd’s older sister Sandy had told a neighbor in 1990 that she’d heard her parents arguing before her mother died. Sandy, possibly due to her dad’s influence, didn’t tell police that in 1990, but she did report it in 1994. Investigators requested a second look at Elaine’s autopsy report.

The medical examiner reexamined the report while considering Sandy’s statement that Boczkowski was in the bathroom at the time of Elaine's death. He concluded that the track marks on her abdomen had been caused by him pushing her down over the tub, forcing the air out of her lungs.

The cause of death was changed to asphyxiation, and Boczkowski was charged with Elaine’s murder. His trial for the crime began in October 1996. He was found guilty and sentenced to life in prison.

“Unlike my dad’s first murder trial, I knew the death penalty was on the table,” said Todd, adding that he was still convinced his family tragedy was all a big mistake.

A judge ruled that evidence from the neighbor from North Carolina who looked after the children after Elaine’s death was relevant. The neighbor testified that Todd told her he’d seen his father in the bathroom holding his mother down.

Todd was shocked because he had no memory of that. Former prosecutor Beth Karas offered a possible explanation for that: “Children can cope with severe trauma by burying it.”

Boczkowski was convicted of killing Elaine. His children made emotional appeals to the court to not sentence their father to death, but Boczkowski received the death penalty anyway. His sentence later was commuted to life in prison 2004 because of an extradition-related issue, AP reported.

Around that same time, Todd visited his father, who admitted that he had seen him killing his mother when he was just 5 years old. Why did Boczkowski finally come clean to his youngest child?

Todd believes that with the death penalty off the table his father no longer needed him to buy his lies.

“It opened up my eyes into who he actually was as a person,” said Todd. “He's a cold, manipulative killer.”

To learn more about the case, watch “Living with a Serial Killer,” airing Saturdays at 9/8c on Oxygen or stream episodes here.