Clowns. They’re supposed to be human happy joy machines bringing laughter to children everywhere, but that really doesn't seem to be the case at all. Try this exercise: name a clown you love that’s happy and not scary at all. I can think of maybe one: Ronald McDonald - and even that’s a stretch. Would you want to meet him in an abandoned house at midnight? Now name a scary one. See how much easier that is?

Was there a shift in perception at one point, or were clowns always scary? Let’s trace some history to get a better sense of it.

The first reported clowns harken back to ancient Egypt around 2400 BCE, according to Smithsonian magazine. They were also in Roman and Greek civilizations, and they were known as court jesters in the Middle Ages. The jesters made fun monarchical life, but they were considered mischievous, not necessarily evil.

The modern day clown, Smithsonian magazine writes, can be attributed to two sources: Londoner Joseph Grimaldi, a physical comedian who painted white on his face and red splotches on his cheeks, and a Frenchman named Jean-Gaspard Deburau and his clown character Pierrot. Those two formed the archetype for the modern clown. This was around the early 1800s, and by later in the century clowns had made their way into circuses as slapstick entertainment.

Around the time of the depression, the “hobo” clown became popular. You know the ones — droopy pants and suspenders and the patchy jackets. By the ‘50s and ‘60s, we had Bozo the Clown, a popular children’s character, and Ronald McDonald as well.

This, Smithsonian Magazine reported, set the stage for a shift in perception on clowns. We went from these genuine characters to something sinister.

Before we explore that it’s worth looking into the psychology of why clowns are scary.

We spoke to Benjamin Radford, author of the book “Bad Clowns,” and he gave us his theory.

“We’re comfortable with clowns in a specific context,” he said. “If we see them at a party we say ‘oh that’s great,’ but if you see a clown at night in a vacant parking lot or knocking on your door at midnight, it’s a different feeling.”

Being murdered by a clown? That's the ultimate shift in context, and serial killer John Wayne Gacy, aka The Killer Clown, planted the idea in the public imagination in the 1970s. There’s no evidence he killed anyone in costume, but there is a very chilling photo of the man in full clown get up, and it only added to the mystique. 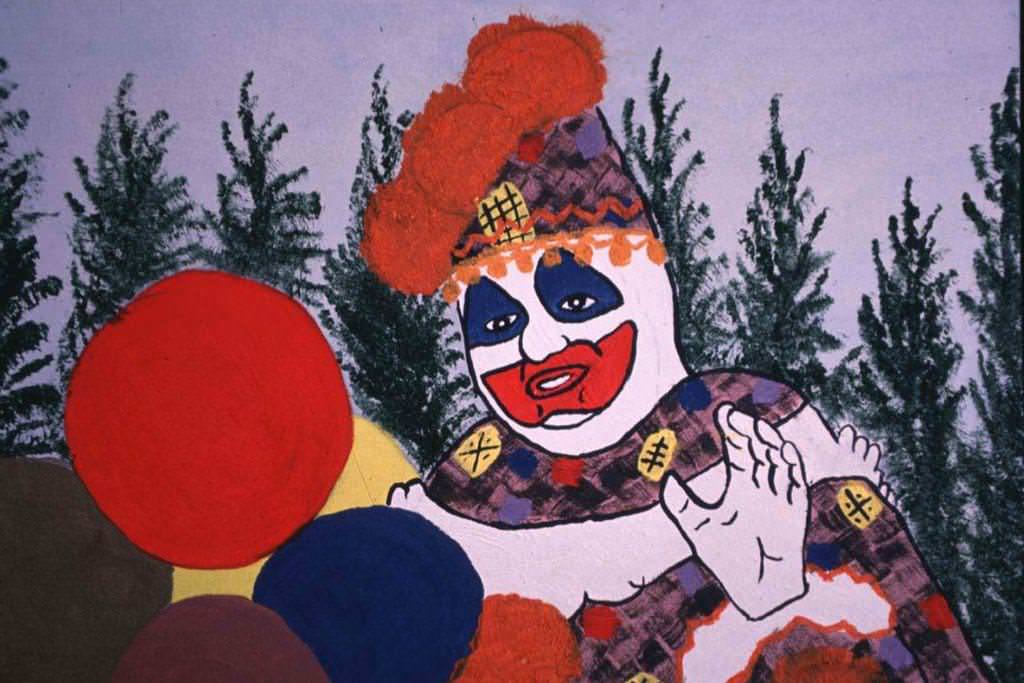 If you look at the way Gacy did his makeup, it seems intentionally frightening.

Gacy killed at least 33 people from 1972 to 1978 - mostly male teenagers, many of whom were stuffed in a crawlspace under his house.

Adding to the incredible ick factor is the indelible image of Gacy in costume “complete with tasseled hat and creepy makeup-fiendish arched eyebrows and a smile that ends in evil, upswept points (professional clowns round off the corners of their smiles to avoid frightening children),” author Mark Dery wrote in his book “The Pyrotechnic Insanitarium: American Culture on the Brink.”

Here’s another detail that is also unforgettable, and chilling:

According to Dery, Gacy would playfully convince his victims to try on toy handcuffs, and then “switch them for real ones when the victim's back was turned. Once the victim was shackled and helpless, Gacy would subject him to horrific sexual abuse, torture, and ultimately death by ligature strangulation,” Dery wrote.

Gay continued his clown fixation in prison on death row, he painted pictures of himself in costume and sold them.

Now that the floodgates were opened and the killer clown ethos found its clown prince, popular culture began to adopt the idea. One of the best examples of this is The Joker. 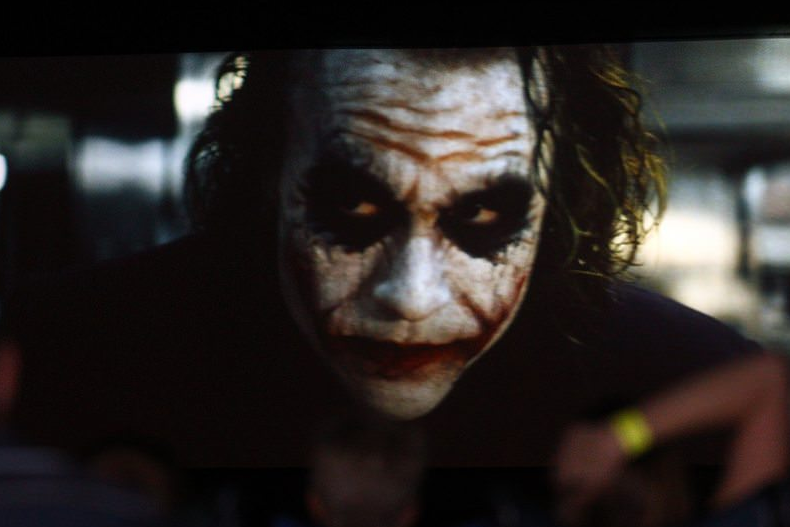 He’s perhaps the most recognizable killer clown, if only because he’s been strewn across so many different platforms - cartoons, blockbuster movies and so many T-shirts. Lately, he’s been synonymous with Heath Ledger’s performance in “The Dark Knight,” but it’s the character and his deceivingly charming smile and laugh, coupled with the insane violence, that really makes him unforgettable.

Joker has his fair share of dark moments in the movies and the comic books, but one of the most gruesome scenes is when he cuts off his own face and uses it as a mask, which is perhaps the ultimate clown costume. 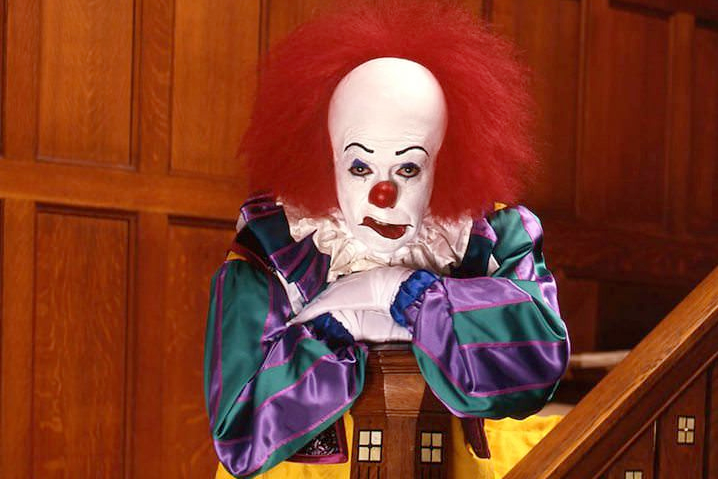 We can’t talk about the Joker without bringing up pop culture phenom Pennywise, the evil clown that feeds off fear from Stephen King’s horror classic “It.” The first one is the 1990 TV miniseries, with Tim Curry starring as the demon clown (above). His version was almost innocuous until he bared his razor-sharp teeth. Bill Skarsgård played the newest iteration from the 2017 movie of the same name, and he was decidedly more devious and chilling. But it’s all there: The evil clown archetype with the scary face paint in reds and blues in sharp lines. Pennywise even dances. What makes Pennywise so terrifying is evident in the first scene of the movies, where the clown is just hanging out in the sewers in a heavy rain, and he cajoles a boy to get close enough so he can eat him. The fact that he can be so charming is part of what makes the killer clown motif so good for horror.

What other killer pop culture clowns fed off Gacy’s shine? How about the Killer Klowns From Outer Space? They’re Clowns— but from space, which makes them Klowns (duh). While probably not the most widely-watched movie, this 1998 cult classic featured uncomfortably garish rubber-looking aliens who just happen to resemble circus clowns. The features are grotesque and exaggerated, and they feast on human flesh. It’s sort of funny in the way it takes everyday fun things and somehow turns them gross, such as using cotton candy as cocoons for humans. Some might scoff at the notion that this isn’t a scary movie, or the fact that it’s campy makes it somehow less creepy. However, if you saw one of these clowns in your room at 2 in the morning, you would probably spontaneously combust in fear (or at least release your insides). Also, this bad boy came out when I was 5, and it made me never want to go to a circus ever again.

Let’s move on to a recent example of a killer clown. 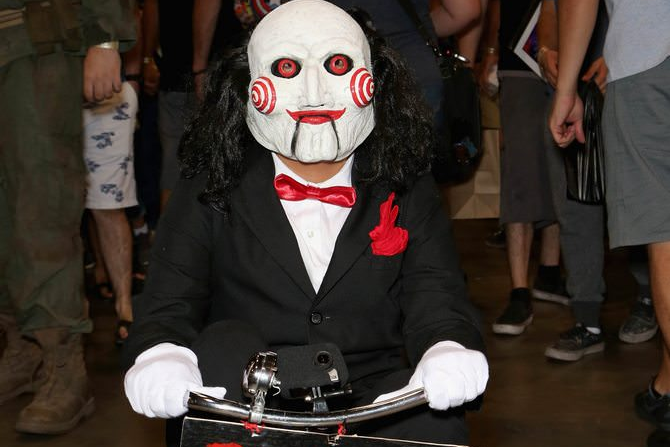 The puppet from the “Saw” Franchise. Before they started jamming “Saw” movies down on our throats every two months (they’re probably making a new one while you read this), it was actually a pretty scary concept. Making a dude cut off his own leg? Classic!

The little puppet clown that rides a bike is synonymous with the series. He’s like a child’s toy but with little red swirls on his face. Is he real? Fake? No one knows exactly what he is, but he’s terrifying for sure.

In the Saw movies, the puppet is the scary clown toy that the Jigsaw serial killer uses to communicate with his torture subjects. He appears in the first film on a grainy TV screen, turns his head menacingly and speaks in a chilling, gravelly voice. His white face and red eyes are oddly misshapen and appear even more frightening next to his little bow tie.

The killer clown motif seems to be here to stay. However, it begs the question: were clowns ever good? Was that period with Bozo in the 1950s just the weird outlier? An angelic blip on the radar of evil? Radford thinks that might be the case. In his book, he wrote:

“As for when clowns 'turned bad,' well, they were never really good to begin with.”