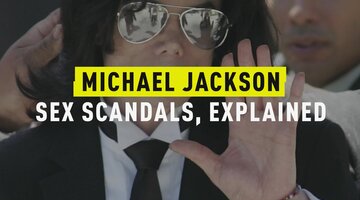 Ever since the first public screening of the upcoming documentary “Leaving Neverland” at the Sundance Film Festival, Wade Robson has, once again, been thrust into the national spotlight. The two-part, four hour-long documentary, which is set to air on HBO on March 3 and 4, delves into Robson and James Safechuck allegations of sexual abuse against Michael Jackson, which they claim they experienced during the height of the “King of Pop’s” stardom in the late 1980s and early 1990s.

Robson, now 36, was an amateur child dancer who met Jackson after winning a dance contest in his native Australia when he was 5, according to CBS News. In 1991, Robson and his mother moved to Los Angeles at Jackson’s behest in order to help advance his choreography career — and it was around this time that Robson and his family were invited to Neverland Ranch.

Robson pursued a life-long career in dance. As a choreographer, he worked with big-time musicians such as Britney Spears (as well as dated her in the early 2000s), Mandy Moore and N*SYNC; he even filled in for an injured Joey Fatone in the group’s video for “Pop.”

In 2002, Wade’s father, Dennis Robson, took his own life after a sustained battle with bi-polar disorder.

“His mental and emotional state just really continued to degrade,” Robson said in an interview featured in “Leaving Neverland.” “He was doing things like disappearing in the night and going on walks through the city, through LA, and catching busses, and we’d have to find him.”

A day after Wade’s brother, Shane Robson, left Australia to visit his family members in California, they all received the news that Dennis Robson had hung himself.

“It was the last week of July 2002 and I was working late in a recording studio in Hollywood. As I was leaving, I saw that I had several missed calls from my Mother,” Robson wrote in a Jan. 2018 blog post titled “Father Figure.” “My stomach dropped and a voice in my head said, ‘Dad.’ I called my Mother back and buried in tears she told me that my Father had taken his life.”

Wade was admittedly not close with his father — he noted in the blog post that Jackson had effectively taken over that role for him growing up — and so he said in the documentary that only after a day, he began “stitching [himself] back up” and getting back to working with N*SYNC and Britney Spears.

In mid-2011 Robson was working on Cirque du Soleil’s tribute to Jackson. But the project reportedly didn’t end well: Robson was allegedly low on funds after getting fired from the show — which led some to allege that he ultimately filed his lawsuit against Jackson out of desperation.

In this May 5, 2005 file photo, defense witness Wade Robson, center, along with an unidentified woman, is escorted into the Santa Barbara County Courthouse by a member of Michael Jackson's security force, in Santa Maria, Calif. to provide testimony in Jackson's trial on charges of child molestation. Photo: AP Photo/Michael A. Mariant, File

“It’s just completely inaccurate. I was hired three times for that show because it kept taking different iterations. And the third time was just preceding my second nervous breakdown,” he recently told Vanity Fair in an extensive interview. “I was in between nervous breakdowns. So the third time, as I was crumbling and falling apart, I removed myself from the project. The accusation is completely false.”

He also said that, for a time, he couldn’t bring himself to dance because of the trauma associated with the sexual abuse he allegedly faced.

“If I started dancing, there’s Michael, in my body. That was the feeling. So I stopped all of it for five years. I didn’t dance for five years. And I never thought I would ever again in my life," Robson told Vanity Fair, adding that a year and a half ago he felt he had “done enough internal work and done enough pulling these things apart” to resume his career once again.

While he’s continued to pursue dance and choreography, Robson has also expanded his focus to music and filmmaking, according to his website.

Robson is also extremely active on social media nowadays: In addition to curating an Instagram account with more than 21,000 followers, he runs a personal blog called “Wade’s Window,” where he writes about personal mindfulness and mental health topics.

Though his love of dance and choreography appear to stem from his youthful connection with Jackson, other parts of Robson’s life have been impacted by his time with the King of Pop.

Robson and his wife, Amanda Robson, whom he married in 2005 and with whom he has one son, started the Robson Family Fund through the Hawaii Community Foundation to assist victims of child sexual abuse. The fund says it is focused on giving out grants to organizations that help such victims, as well as “[identifying and filling] in gaps in areas of child abuse healing and prevention that are under-researched, under-developed or inactive.”

Wade met Amanda when was 19 and she was 22 at a nightclub that Amanda was working at as a promoter.

“My girlfriend and I were just like totally playing around on the dance floor, dancing very goofy,” she says in part two of the documentary. “And Wade and his friends, kind of like, jokingly called us out to do like, a little battle, which I didn’t know who Wade was at the time.”

She remembered that a big crowd began to form around the group, and then Wade and his friends began busting out a fully choreographed routine.

“[It made us] look really ridiculous,” Amanda says.

Her friend then told her that the guy that challenged them was Wade Robson, N*SYNC’s choreographer.

“And I thought he was a total asshole,” Amanda recalls, laughing.

Eventually the two went out, and Amanda said Jackson came up during their first date. It took years before he told her about the alleged abuse.

Over the years, Robson has made conflicting comments about his relationship with Jackson.

After speaking in Jackson's defense during 1993 sexual abuse allegations and defending Jackson at the pop star’s 2005 molestation trial, as well as saying that he and Jackson had a “wonderful relationship” two months after his death in 2009, Robson eventually changed his tune. In 2013, Robson went public with his claims that the pop icon sexually abused him from the age of 7 to 14, filing a lawsuit against Jackson’s estate nearly four years after his death.

Robson has said coming to terms with what happened has been a long process.

“This is not a case of repressed memory,” Robson told the “Today Show” in 2013. “I never forgot one moment of what Michael did to me, but I was psychologically and emotionally completely unable and unwilling to understand that it was sexual abuse.”

His lawsuit faced multiple legal hurdles. It was dismissed in 2015 for not falling within the statue of limitations for child abuse victims to file claims against an estate. Robson then redirected it at companies controlled by Jackson's estate, and a judge found them not liable in 2017. The case is currently under appeal, according to Rolling Stone.

He also has come under fire by Jackson defenders for selling Jackson memorabilia in 2011 — Jackson’s “Smooth Criminal” fedora for $49,920 and his “Bad”-era gloves for $31,250. Julien's Auctions confirmed the sale, which, in some critics' eyes gives credence to the same argument Jackson and his estate have used to fight off allegations of impropriety for decades: his accusers are after money.

Robson has said that he lives with the pain of his past every day since Jackson is still such a ubiquitous character in the world’s pop cultural landscape.

“My son came home from school one day, a few years ago, and he said, check out this thing my friend taught me: and he did some version of the Moonwalk,” he told Vanity Fair. “It was extremely triggering to me but then, as a parent, I’m trying to stop myself, because I don’t want to put my issues on him. But Michael is everywhere. It’s challenging."