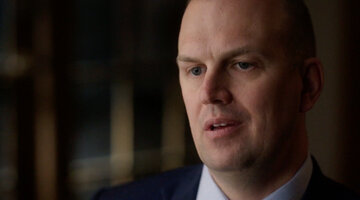 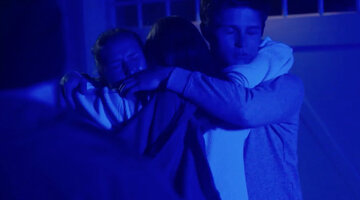 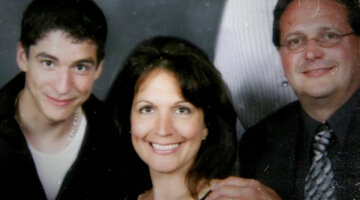 In the early morning hours of March 2, 2010, Angela Kramer called 911 to report that an intruder was firing a gun in her parents’ home in Darien, Illinois.

She was whispering during the distress call because she was hiding in her closet and feared that the shooter was still inside, investigators told “Mastermind of Murder,” airing Sundays at 7/6c on Oxygen.

When police arrived, they found the bodies of Jeffrey Kramer, 50, who owned an auto repair business, his wife, Lori, 48, an avid gardener, and their son Michael, 20. The victims were shot multiple times – in the head as well as the body.

Angela and her younger brother, Anthony, who was in the basement during the attack, were the only members of the family to survive the incident.

Investigators were able to learn more when a young woman who identified herself as Michael Kramer’s girlfriend approached investigators. She said they were watching TV in the living room when the invader broke through a window and began shooting. She was able to escape out of the house, but Michael was not. She gave police a general description of the shooter as a male dressed head-to-toe in black.

The Major Crimes investigative team collected evidence at the scene, including a hammer used to break the window and several .40 caliber shell casings. Because nothing was stolen, it did not appear to be a robbery gone wrong — it seemed more like a targeted murder, detectives thought.

But who would want to annihilate this well-respected family execution-style?

Around 8 a.m., five hours after the slaughter, police interviewed the surviving siblings. Anthony had seen nothing, but when asked if their family had enemies, Angela spoke up.

She told them that her ex-boyfriend and her 1-year-old son’s father, Johnny Borizov, had a long-running feud with her parents. He was overly possessive and controlling, she claimed.

Before Angela had broken up with him several months earlier, he had allegedly gotten violent at a baby shower in May 2009. (She later testified about this in court.)  Angela ended the relationship, sparking an acrimonious custody battle.

Bad blood between Borizov and the Kramers raised red flags for investigators. In a twist, before investigators went to interview Borizov, they learned that he had actually called 911 about the shooting.

Borizov had seen a report on the news, he claimed, saying he was concerned that the mother of his son might be dead. He also volunteered an alibi for his whereabouts at the time of the 3 a.m. triple homicide: He was at a casino.

His excuse checked out, but investigators still wondered if Borizov had a role in the crime. They were able to get a warrant to search Borizov’s phone records, which showed he had a series of calls before, during, and after the slayings.

The calls were from then-23-year-old Jacob Nodarse. In one paranoid message, Nodarse told Borizov he believed he was being followed by black SUVs.

Detectives learned that Nodarse had been a friend of Michael Kramer's and that the young men had had a falling out.

During an interview with Nodarse’s grandparents, investigators  discovered that Nodarse, an auto mechanic, had mental difficulties, according to Jeff Muntz, former District Attorney Investigator, DuPage County. He was prone to depression and had suicidal tendencies, and he had problems with drugs. But was he capable of murder?

Nodarse became the prime suspect, but when detectives tried to bring him in for questioning he was nowhere to be found. A manhunt led by U.S. Marshals ensued that led to Florida. Nodarse was found sleeping in a van outside his parents' home there. Concerned that he was armed, law enforcement approached the vehicle with care.

“He didn’t have the gun with him,” said Joe Birkett, former State’s Attorney, DuPage County. “He was taken in without incident.”

Investigators believed they found the shooter in the Kramer case — but they still didn’t know the motive or if Borizov was connected.

While in custody, Nodarse told officials that he was “scared of repercussions” if he opened his mouth. He reluctantly confessed that Borizov, who was his friend and someone he feared, ordered the hit.

If he didn’t go through with the hit, Nodarse told police in the taped interview, he and his family were "gonna die.”

“Jacob would do anything for Johnny, he kind of looked up to him,” said Chiesa.

Investigators learned that Borizov was involved in gang activities and Angela Kramer knew a lot about that. When the custody battle heated up she threatened to go to police, according to investigators. So, Borizov wanted her silenced.

Borizov's instructions to Nodarse were to kill Angela Michael and anybody else who got in the way, according to Nodarse. The murder was to take place at 3 o'clock in the morning, according to Bernie Murray, lead prosecutor, DuPage County. Borizov also mapped out the Kramer home for his hired gun.

Nodarse was led to believe that other murders were going down the same night by gang members. Investigators found no proof of the purported gang activity.

It was “100 percent nonsense,” insisted Chiesa, but Nodarse believed it.

“I think he completely used me,” Nodarse said about Borizov in the taped interrogation.

Nodarse’s confession described Borizov as the brains behind of the murders.

Police were able to detain Borizov as a person of interest and hold him for 72 hours without charges. During that time police retrieved a gun from a dumpster where Nodarse had tossed it. That evidence allowed them to extend Borizov’s detention.

On March 5, Nodarse was extradited back to Illinois. He was placed in a cell next to Borizov, who was heard asking him questions about their murder plan in taped jailhouse conversations. He corroborated what Nodarse told the police. On March 6, Borizov was formally charged for the murders.

In 2011 Nodarse pleaded guilty to the triple murder and agreed to testify against Borizov at his 2013 trial in exchange for the taking the death penalty off the table.

Prosecutors emphasized that Borizov was holding the gun but it was as if “his finger is pulling the trigger every time the trigger is pulled.”

To learn more about the case, watch  “Mastermind of Murder,” airing Sundays at 7/6c on Oxygen.