Sign Up for Free to View
Murders At The Boarding House Airs Saturday, April 17th 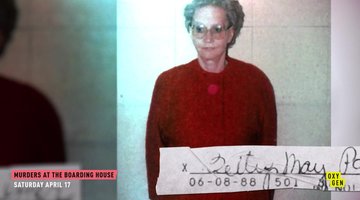 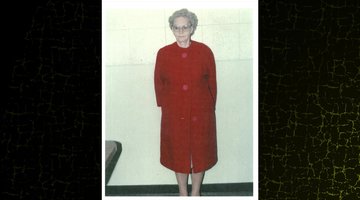 It seems fitting that a published recipe collection by serial killer Dorothea Puente, aka the “Death House Landlady,” includes how-to's for whipping up “Tamales Prison Style.”

That’s one of nearly 60 dishes featured in “Cooking With a Serial Killer,” written with publisher Shane Bugbee, who has also collaborated with John Wayne Gacy.

When Puente’s book was released in 2004 she was 11 years into a life sentence for drugging and burying three people whose bodies were dug up from the backyard of the Sacramento, California lodge she ran, the Sacramento Bee reported in 2013. She died in prison at age 82 in 2011.

Puente’s stunning crime spree (she was accused of murdering six other people and seven bodies total were found in her backyard) is told in the two-part series “Murders at the Boarding House” — airing Saturday, April 17 at 7/6c  and Sunday, April 18 at 7/6c on Oxygen as part of Serial Killer Week, a nine-night special event diving into the most fearsome criminals of all time on Oxygen.

As Bugbee wrote in the forward to her cookbook, “Dorothea’s been accused of a lot of things but being a bad cook isn’t one of them.”

It’s an inherently quirky tome, one that’s peppered with interviews drawn from phone conversations between Puente and Bugbee, samples of her poetry, and bits of artwork, including a sketch of animals, skillets, and, wait for it, a shovel.

The meat and potatoes of the tome are, of course, the recipes. Puente learned her way around the kitchen at the knee of her mother and grandmother. Still, cooking tips from a mass murderer? Really?

Then again, ever since the fictional serial killer Hannibal Lecter reveled in eating a doomed census taker’s liver with “some fava beans and a nice Chianti,” ghouls and gastronomy have gone together, hand in oven-mitt.

Puente’s approach to cooking is straight-up and no-nonsense as she covers a handful of categories: snacks and sauces, soups and salads, sides, main courses, and desserts.

Her versions of everyday dishes like beef stew, pot roast, chicken pot pie, and pork tenderloin seem secure and appealing enough. She also spices things up with burritos and tamales and knows how to turn ground lamb and a medley of aromatic spices into fixings for stuffed grape leaves.

Some offerings fail to inspire culinary confidence, including chicken gizzards, heart and livers (paging Dr. Lecter), and a cheese-dusted oyster loaf. Pass, thanks.

She’s got some tasty tricks up the sleeves of her prison uniform, though. The secret to her favorite salsa is diced nectarine for a sweet fruity punch, while her vegetarian-friendly garbanzo bean salad gets jolts from hits of thyme and mint. Brussels sprouts get crowned with crunchy bacon and nuts — yes, please.

When all is said and done Puente’s simple dessert made with tart sliced apples (you don’t even have to peel them), butter, sugar, and cinnamon sounds super easy and tempting — in short, to die for.

For more food for thought, watch “Murders at the Boarding House” — airing Saturday, April 17 at 7/6c and Sunday, April 18 at 7/6c on Oxygen as part of Serial Killer Week, a nine-night special event diving into the most fearsome criminals of all time on Oxygen.

Who Were Dorothea Puente’s Victims?