Sign Up for Free to View
Why Did Angela Dickinson Want Her Husband Dead? 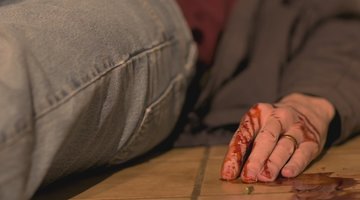 5:34
Preview
A First Look Inside the Case of Angela Dickinson

4:28
Exclusive
There Were “Red Flags” with Angela Dickinson 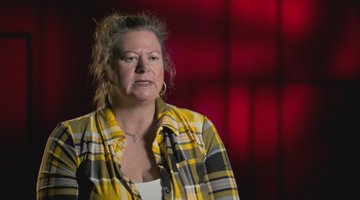 Those who knew Angela Dickinson said she could charm any man. She was even able to charm her stepbrother and the father of her child to murder her own husband, Carl Dickinson.

Carl Ellis Dickinson was born in 1955 and raised in Lee County, Alabama. By his early 40s, Carl was making good money as a long-haul trucker and, after two failed marriages, he began dating a 19-year-old named Angela in 2002. He was old enough to be her father and had actually previously dated her mother.

Despite the age difference, before the year was out, Carl and Angela were married.

“I think what Angela saw in Carl was stability. You know, when you really needed someone, Carl was that person you could go to,” her sister Jasmine Treadwell told “Snapped," airing Sundays at 6/5c on Oxygen.

Carl and Angela had an open door policy and would offer a place to stay to any loved one in need. This included Jasmine Treadwell, who moved in with her children. Another occasional guest was Angela’s stepbrother, Jake Bartlett.

In 2006, Paul Phillips needed a place to stay and moved in with the Dickinsons. He and Carl had met at truck driving school and often worked together, trading off shifts.

In 2013, Angela learned she was pregnant. Friends say she was thrilled to finally be starting a family of her own, and on the afternoon of Sept. 8, 2013, Angela gave birth. Her sister, Sabrina Murphy, went to the Dickinson home to pick up a car seat and other baby supplies. Carl was supposedly on the road for work at the time.

But when Murphy went to the house, she found a door inside the garage open. Carl Dickinson was there lying on the kitchen floor, dead at age 59 from numerous gunshot wounds to head, neck, and chest, local ABC-affiliate WTVM reported that year. Investigators found 19 shell casings from a .22 caliber firearm at the scene.

“It appeared to be a forced entry burglary/robbery gone bad. The residence looked as if it had been ransacked, however, nothing was missing,” Lee County Sheriff’s Office Investigator Rob Kloeti told producers. To investigators, it looked staged.

At the hospital, Angela broke down in tears upon hearing of her husband’s murder. She said she had gone into labor three days earlier and had been trying to reach Carl the entire time.

“Angela told us she called maybe four times and did not get ahold of him.  She did not think that was super strange because he was a truck driver and he could be out on the road without service,” Kloeti explained.

Detectives asked why Carl was on the road if she was about to give birth to their child. That's when she revealed Carl wasn’t her child’s father. Paul Phillips was.

“According to Angela, Carl was OK with Angela being pregnant with Paul’s baby because Carl couldn’t give her a baby, so to speak,” Lee County Sheriff’s Office Captain Jimmy Taylor told “Snapped.” Carl had a vasectomy.

Investigators spoke with Phillips, who said that when Angela went into labor, he left for Florida to pick up her stepfather, Jesse Bach, and bring him back to Alabama to see the baby.

“We actually verified his alibi to that point and sure enough, he had been down there to Florida,” Lee County Sheriff’s Office Lieutenant Tammy Booth Hollis told “Snapped.”

An autopsy was performed, which gave investigators a timeline of events.

“The date that he was killed, actually, was September the 5th and that was the day that his wife, Angela, was going into the hospital to be induced,” Taylor told producers.

When investigators spoke with Carl’s relatives, they were shocked to learn Angela had been pregnant. They were told her swollen stomach was the result of an unknown medical issue, and that Carl thought Angela had a stomach tumor which he assumed was cancer. He had even started working overtime to save up money for medical treatments.

Angela’s family, on the other hand, knew everything.  They said Angela and Phillips had an affair and when Carl found out he kicked Phillips out of his house. However, Phillips would move back in whenever Carl was away on his trucking route. The rest of the time he slept in the woods nearby.

With a child on the way, Angela and Phillips began conspiring to get rid of Carl for good.

“We had a relative of Angela’s that told us that Angela had tried to do something to Carl before,” Booth Hollis said.

Angela had acquired a stash of painkillers in the hopes of poisoning her husband of 10 years, those close to Angela claimed, and she would crush them up and put them in his food, but it never worked.

Another time, Angela and Phillips allegedly found a dead rattlesnake on the side of the road and milked it for its venom. They put it in Carl’s food but it only made him sick.

On Sept. 10, Phillips was re-interviewed. “He knew the game was over. We weren’t going away. We know he was involved and he just needed to tell the story,” Kloeti told “Snapped.” “Paul was in love with Angela. Paul wanted to have a family with Angela and his new baby. He wanted Carl gone.”

Phillips enlisted Jake Bartlett in his cause. Bartlett said he knew someone who would kill Carl, a man who was named Trap.

On Sept. 5, Phillips, Bartlett, and Trap went to the Dickinson home. First, they staged the robbery and stole a .22 caliber rifle from Carl’s safe. They then waited for their victim. Bartlett and Trap hid behind a trailer while Phillips huddled in the garage.

“Paul said that when Carl started walking into the house, Trap ran up behind him with a rifle and started shooting,” Taylor told “Snapped.”

Following the murder, Phillips immediately left for Florida to establish his alibi. He was adamant Angela had nothing to do with the murder.

Jake Bartlett was picked up at his home in Notasulga, Alabama. Bartlett also pinned the murder on Trap and gave detectives his real name: Travis Lamont Kyles. He was later apprehended in Atlanta.

While Bartlett’s and Phillips’ statements were similar, they differed in one significant detail. “Jake told us that Angela was the mastermind behind the plan,” Taylor told producers.

Bartlett said Angela had been asking him for months to help her kill Carl. She even offered to pay him money from Carl Dickinson’s 401K plan. He claimed Angela set her husband up, calling him to track his whereabouts and relaying the information to Phillips so they knew when he would arrive home. Angela’s phone seemed to back up that story, as it showed multiple calls to Carl and Phillips on the day of the murder.

Angela was arrested on Sept. 11, 2013 at the local health department where she was trying to get her child a social security card. Detectives believe Angela’s pregnancy was the ticking time bomb which sealed Carl’s fate.

“Angela was the little devil on the shoulder talking to Paul and Jake and getting them to do her will. She admitted that she was basically behind the whole idea of Carl getting killed,” Kloeti told “Snapped.”

Angela Dickinson, Paul Phillips, Jake Bartlett, and Travis Kyles were charged with capital murder for the death of Carl Dickinson, Montgomery, Alabama NBC-affiliate WSFA reported at the time. They all pled guilty and got 30 years in prison each.

Dickinson, Phillips, Bartlett, and Kyles will first be eligible for parole in 2028. However, their earliest release date is 2043, according to the Alabama Department of Corrections.