Sign Up for Free to View
Who Is Blanche Taylor Moore? 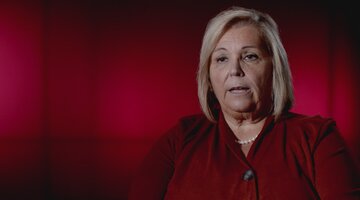 5:11
Exclusive
Who Is Blanche Taylor Moore?

Blanche Taylor Moore went from preacher’s daughter to reverend’s wife. She was the quintessential cheerful and charming Southern homemaker, and her cooking was to die for — literally.

Born Blanche Kiser in 1933, she was one of seven children. Her father, Parker Davis Kiser Sr., worked various odd jobs and was a self-styled Evangelical preacher.

“He had no papers to be a preacher,” Jay Ashley, a former reporter with the Alamance News, told “Snapped,” airing Sundays at 6/5c on Oxygen. “He would just go out and start preaching.”

Although he presented himself as a man of God, Blanche’s father eventually left her mother for a younger woman, reported Raleigh, North Carolina’s The News & Observer newspaper. He was a drinker and hard on his family, and Blanche left home the first chance she got, according to “Snapped.”

When she was 19, Blanche married James Napoleon Taylor, a Korean War veteran who restored furniture for a living. Meanwhile, she got a job at a Kroger supermarket in Burlington, North Carolina, eventually becoming head cashier, the highest position available to a woman at the time.

James and Blanche were married for 21 years and had two daughters. Then, one morning in 1973, Blanche claimed she found her husband unresponsive in bed. He was dead at the age of 45 from what was believed to be a heart attack, according to the Los Angeles Times.

Attractive and stylish, Blanche didn’t stay single for long. She began dating Raymond C. Reid, a divorced assistant manager of the Kroger store where she worked. The couple was together for years, but they never married. Raymond’s son, Steve Reid, told “Snapped” his father’s girlfriend was polite, she was also “very good at manipulating to get her way.”

Blanche presented herself as “a sweet, Christian lady,” according to the Los Angeles Times, and her free time was spent within her church community, where she volunteered to bring food to the sick.

On Easter Sunday, 1985, Blanche attended services at the Carolina United Church of Christ. Right away, she hit it off with Reverend Dwight W. Moore, who had divorced his wife some years prior.

“Mom would have been one of those women that would have made a great pastor’s wife,” Blanche’s daughter, Cindy Chatman, told “Snapped.” “She was very knowledgeable of scripture.”

Not too long after Blanche met Rev. Dwight, Raymond was admitted to the hospital for severe nausea and vomiting. Doctors were at a loss as to what was causing his ailment, which seemed to improve and decline at random.

Blanche was a frequent visitor during Raymond’s extended hospital stay, which lasted through the fall.

“She would do the nice thing and bring his favorite dish or a milkshake,” Steve told “Snapped.”

Nurses observed Blanche spoon-feeding Reid her homemade banana pudding on Oct. 1, 1986, according to the News & Record. A week later, he was dead.

Guillain-Barré Syndrome is a rare autoimmune disorder in which the body's immune system attacks your nerves, according to the Mayo Clinic. Symptoms include weakness, numbness, incontinence, and difficulty breathing, and it can lead to cardiac arrest.

Although questions remained about Raymond’s cause of death, Blanche convinced his family not to have an autopsy done. “She said, ‘Your dad’s been cut up enough. He wouldn’t want this,’” Steve told “Snapped.”

Blanche was the executor of Raymond’s will and presented his two sons with a document that stated he wanted his assets split three ways between them and her. It had been signed one month before his death, according to the News & Record.

Rev. Dwight soon asked Blanche to marry him, and they were married on April 19, 1989 in a small private ceremony. The couple honeymooned in New Jersey, and barely a week into their vacation, Dwight was hospitalized due to intense abdominal pain and flu-like symptoms.

The last thing he had eaten before getting sick was a chicken sandwich that Blanche had given him from a fast-food restaurant, according to the News & Record.

“The symptoms that he had were numbness and neuropathy in his hands, in his feet, nausea, vomiting, diarrhea, shortness of breath, excruciating pain all over the body, and his health continued to decline,” former Burlington Police First Sergeant Dexter Lowe told “Snapped.”

The ailment came on strong and for no foreseeable reason. On a hunch, a medical student suggested testing him for heavy metals. When his blood levels came back, they revealed the presence of arsenic at levels doctors had never seen before — 100 times the normal amount, reported the News & Record.

The hospital notified police, who monitored and restricted his visitors, including his new wife, and Dwight’s condition began to stabilize.

Authorities spoke to Blanche, and she denied having anything to do with her husband’s poisoning.

“Blanche said Dwight was having a very hard time. She suggested that he was depressed and that he probably poisoned himself,” Lowe told “Snapped.”

When interviewed by police, Dwight said he hadn’t tried to kill himself and could think of no one who would want to murder him. Asked if anyone close to him or his wife had died mysteriously, Dwight told them about Raymond Reid.

Burlington Police exhumed Raymond’s body and tested him for toxicology.

“The examination of Mr. Reid’s tissues reveal elevated levels of arsenic. Not just a little more than normal, but in a concentration associated with fatalities,” Butts told “Snapped.” Dwight’s arsenic level was 30 times higher than normal, reported the News & Record.

Authorities subsequently began looking at Blanche’s first husband, Taylor, who also died from heart failure without warning. Butts recommended an exhumation and autopsy, and his arsenic levels came back as 60 times the normal rate, according to the News & Record.

Soon, authorities began to wonder just how many people in Blanche’s life had died of unusual circumstances throughout the years.

“We had a list at that time of 22 people that we had obtained court orders on to obtain their medical records,” Lowe said.

Eventually, two other bodies — Blanche’s father and her mother-in-law — were exhumed and had autopsies performed. “There was a high level of arsenic in P.D. Kiser Sr. and Isla Taylor’s autopsy, however, not enough to cause death,” Lowe told “Snapped.”

Blanche was arrested at her home on July 18, 1989 and held without bond. “She was charged in all three of those cases. Two charges for murder and one for attempted murder,” News & Record reporter Justin Catanoso told “Snapped.”

Before Blanche’s trial was to start, her attorney presented a handwritten confession from a man named Garvin Thomas, who claimed he poisoned the men in her life because he was in love with her.

After obtaining numerous examples of her handwriting, the State Bureau of Investigations was able to prove Blanche had written the note herself, according to the News & Record.

Prosecutors opted to try Blanche for the murder of Raymond first in October 1990. The state had lined up 54 prosecution witnesses, including Dwight, who was still recovering from being poisoned.

The 57-year-old was found guilty of Raymond’s murder on Nov. 14, 1990, and she was later sentenced to death, according to the Associated Press.

Authorities dropped the additional charges after she was sentenced, and she never stood trial for the death of Taylor or the poisoning of Dwight, reported North Carolina newspaper the Winston-Salem Journal.

Weeks after Blanche’s death sentence, Dwight filed for divorce. He would later remarry and move to Virginia. He died in 2013 from natural causes.

At 87, Blanche is North Carolina’s oldest death row inmate and one of only two women currently condemned to death in the state. North Carolina hasn’t executed a prisoner since 2006, and it is assumed Moore will die in prison.

She maintains her innocence to this day, according to Raleigh’s ABC 11.