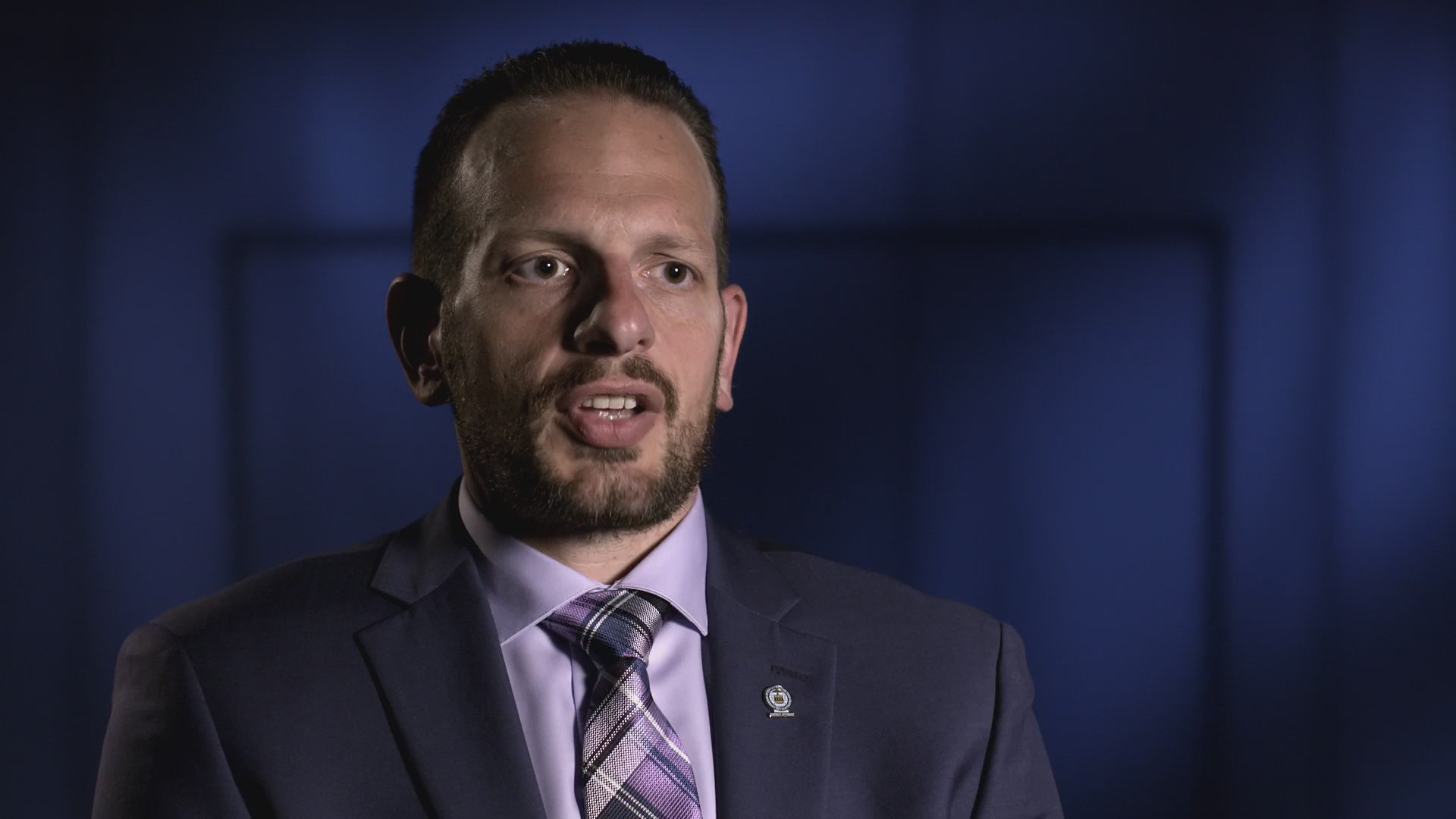 When Michael McNew met exotic dancer Jennifer Morrissey at a strip club in 2013, the two quickly struck up a bond, despite their 30-year age difference. Over the course of their relationship, McNew would act as her “sugar daddy,” paying her bills, giving her money and getting her out of trouble.

After she shacked up with a new boyfriend, however, McNew threatened to cut her off financially — and that is when she put a bullet between his eyes.

Michael Dennis McNew was born in Maryland and attended West Virginia University before going into the pharmaceutical business. He was divorced with two grown children, and by the time he met Morrissey, he was an executive at AbbVie Pharmaceuticals and owned a plush suburban home in Bucks County, Pennsylvania, northeast of Philadelphia.

Jennifer Lynn Morrissey, on the other hand, had experienced “a lifetime of abuse and tragedy,” in the words of her defense attorney Phil Steinberg, as quoted in the Bucks County Courier Times newspaper. While growing up, Morrissey suffered abuse and dropped out of school to avoid being bullied, according to “Snapped,” airing Sundays at 6/5c on Oxygen. She also developed an addiction to heroin.

When she became a single mother in her mid-20s, Morrissey worked hard to provide for her young son and took up a job as an exotic dancer at a strip club in Bristol Township, Pennsylvania, where McNew was a regular customer.

The two bonded over a shared love of motorcycles, and McNew began romantically pursuing Morrissey. She agreed to go out on a date with him after he paid her overdue electric bill of $1,200, according to Pennsylvania newspaper The Intelligencer. Over the course of their relationship, he would continue to give her money and gifts, including cars, motorcycles and a trip to Puerto Rico.

Eventually, Morrissey moved into McNew’s home “so that he could take care of her,” said Steinberg, according to People magazine. Morrissey began referring to him as her “sugar daddy,” reported The Intelligencer.

Though McNew offered Morrissey domestic and financial stability, she had a penchant for getting into trouble. When she did, McNew was there to bail her out and pay her court fees, amounting to about $6,000 over the course of their relationship, according to local newspaper the Burlington County Times.

In 2016, Morrissey hit a bicyclist while driving McNew’s car, for which he paid out $2,000, according to The Washington Post. That same year, police were called to McNew’s home when a friend of Morrissey’s overdosed on heroin there, according to The Philadelphia Inquirer. McNew was not home at the time.

McNew’s loved ones were aghast at his new girlfriend and the money he spent on her.

“A few different friends had really tried to talk some sense into him. They didn’t really want to be around her,” Patrick McNew, McNew’s son, told “Snapped.”

McNew’s daughter, Katie Anderson, told her father she did not want Morrissey at her upcoming wedding, and so he decided to skip the event altogether.

“For him to make this decision really showed where his mind was,” Anderson told “Snapped.”

McNew continued to grow closer to Morrissey, and he even made her the beneficiary two life insurance policies worth more than $360,000, reported The Washington Post.

The relationship hit a rocky point, however, in early 2017, when Morrissey began seeing another man named Charles “Ruthless” Kulow, a member of the Breed motorcycle gang.

Founded in New Jersey in 1965, the Breed are considered an “outlaw” motorcycle club with several chapters in the Northeast and Midwest. Members of the gang have been connected to crimes such as racketeering and the distribution of methamphetamine, according to Philadelphia ABC affiliate WPVI.

Kulow himself had a criminal record, which included charges of assault, robbery and drug arrests, according to The Washington Post, and he was already on parole when he began dating Morrissey.

In text messages with Morrissey, McNew called Kulow a “monster” and threatened to report him to the FBI, according to the Burlington County Times. He feared his new romantic rival and said he would cut off Morrissey’s financial support. Morrissey eventually moved out of McNew’s home and began staying in a trailer with Kulow owned by his mother in Bensalem, Pennsylvania.

Things reached a head on Aug. 6, 2017. Throughout the day, Morrissey and McNew exchanged a series of angry text messages, vacillating between professions of love and threats of violence.

"You have a new boyfriend now,” McNew wrote in one message, cited by The Philadelphia Inquirer. “I have always loved you beyond your imagination and mine, but you chose differently. And I guess 4 years with you is all a waste of my time."

McNew told Morrissey she was no longer allowed in his home and said he would put her belongings in a prepaid storage locker.

"You have a choice: touch my stuff or I cut your throat," she replied, according to WPVI, adding, “I’m gonna stab you. I'll gut you like I'm field dressing a f***ing deer.”

He told her to stay away from his home and that if she did not listen, he would “defend himself."

“[G]et the gun ready cause I’m coming, I already told you that I’ll be there tonight … guess you’re just gonna have to shoot me,” she replied.

That night, Morrissey rode over to McNew’s home on her motorcycle. She later claimed that once she arrived, McNew pulled out a firearm, and she swatted it away, according to “Snapped.”

“Jennifer stated … she kneels to grab the gun, and when she goes to point it at his face, he lunges for it, and the gun goes off,” Upper Makefield Township Police Department Detectives told “Snapped.”

McNew was fatally shot between the eyes at point blank at a distance of less than an inch away, reported The Intelligencer. The bullet traveled in a slightly upward trajectory, indicating he was facing forward and looking straight ahead when he was shot.

“The crime scene, the forensic evidence, and actions of the defendant all point to one thing: She went there, she pointed a deadly weapon at him, and she shot him once between the eyes," Bucks County Assistant District Attorney Kristin McElroy would later tell the jury at Morrissey’s murder trial, according to The Philadelphia Inquirer.

After the shooting, Morrissey met with Kulow and told him that she had accidentally killed McNew. Kulow said that because he was on parole at the time, he asked his friend Jerry Watson to return to McNew’s home to see if he was still alive, according to “Snapped.”

“Jerry said that he was shocked at what he saw next. It didn’t match anything that Jen had said. This didn’t look like self-defense,” Det. Jumper told “Snapped.” “This looked like an execution. He next said that he saw Jennifer kneel down in front of Mike, and she was taking his watch off his wrist.”

Morrissey tried to make it look like McNew had been murdered during a robbery, according to the Bucks County Courier Times. His pockets were turned out, and his laptop and cellphone were stolen and buried in Kulow’s mother’s yard.

She also sent McNew several messages via Facebook, making it appear as if they were having a conversation after she had killed him. Morrissey testified Kulow took the murder weapon, cut it into pieces and melted it down, according to The Intelligencer.

McNew’s body was discovered on the evening of Aug. 8, 2017 by his co-worker, Marry Ann Shockley, who went to his house to perform a welfare check. She found the 64-year-old sitting dead in his chair, according to “Snapped.”

Two weeks later, when Morrissey failed to arrive at a scheduled probation meeting regarding an unrelated case, officers arrested her on a bench warrant for probation violation.

While Morrisey was in custody, a jailhouse informant contacted law enforcement to report that Morrissey had claimed she was “involved with Charles Kulow in a homicide in Bucks County,” District Attorney investigator Eric Landamia told “Snapped.”

By investigating her cell phone records, authorities learned Morrissey was in the area during McNew’s murder, and that her phone auto-connected to the wireless router at his home around the same time.

Morrissey was charged with criminal homicide, burglary, tampering with evidence and possessing an instrument of crime on Sept. 29, 2017, according to the Bucks County Courier Times. She was held without bail.

Awaiting trial in prison, Morrissey was given the nickname “Sug Slayer,” a reference to her killing her “Sugar Daddy.” She accepted the moniker and joked about it, even signing a birthday card to a fellow inmate “#SugSlayer,” according to the Bucks County Courier Times.

Morrissey’s cellmates would later testify against her at her January 2019 trial.

When Jerry Watson took the witness stand, he said the murder scene showed no signs of the struggle Morrissey had described, according to the Bucks County Courier Times. Only Charles Kulow backed up Morrissey’s version of events, himself already back in prison on a third-degree murder conviction, according to The Intelligencer.

At her trial, Morrissey took the stand in her own defense, repeating her version of events and claiming Michael McNew’s death was accidental. It wasn’t enough to convince the jury, however, who deliberated for 10 hours before finding her guilty of first-degree murder, tampering with evidence and possession of an instrument of crime, according to FOX 29 in Philadelphia.

She was sentenced to life in prison without the possibility of parole.

“Innocent people are no longer innocent because of you, because of your selfish, deliberate decision to kill Michael McNew,” Judge Raymond F. McHugh said at her sentencing. “What you have done to yourself you have earned.”

To hear more about the case, watch “Snapped” on Oxygen.