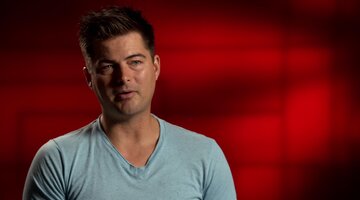 The story of Colleen Stan began as a journey to a celebration before it detoured into a dark and disturbing saga that’s attracted filmmakers, writers, and musicians for over three decades.

On May 19, 1977, Stan was hitchhiking from her home in Eugene, Oregon to northern California to attend a friend’s birthday party. She was 20 years old and had thumbed plenty of rides before. But this ride would end differently.

She was picked up by a couple, Janice and Cameron Hooker, who abducted Stan, imprisoned her in a coffin-like wooden crate, and used her as a sex slave for seven years.

“Snapped Notorious: Girl in the Box,” airing Sunday, July 17 at 7/6c on Oxygen, traces Stan’s horrific ordeal. It’s a brutal and shocking story, which explains why it continues to be explored in books, movies, songs, and TV shows.

Lifetime’s 2016 dramatization of Stan’s horrific experience, “Girl in the Box,” was written, directed, and executive produced by Stephen Kemp, who’d helmed a 2013 episode of the docudrama series “Dangerous Persuasions” about the case.

The story “does have some very dark aspects to it,” Kemp told PEOPLE in 2016. “But it’s also the story of a survivor.” During filming in Arizona, Stan met with actress Addison Timlin, who played her, as well as other Lifetime cast members.

Stan’s kidnapping and ultimate survival has also worked its way into various TV series, including a “Criminal Minds” episode that explored the way victims are kept under a kidnapper’s thumb. An installment of “Law & Order: Special Victims Unit” about a lawyer who is suspected of keeping a Romanian immigrant as a sex slave was also ripped from the headlines about Stan.

Stan has even been the basis for both nonfiction and fiction authors. Kathy Reichs weaves it into her  2004 novel, “Monday Mourning,” which follows a forensic anthropologist sleuthing out an unsolved case. Characters discuss how Hooker held Stan under his thrall, even during unshackled periods when she maybe could have fled for freedom.

Prosecutor Christine McGuire and co-author Carla Norton analyzed the case and presented details about brainwashing and instruments of torture in 1989 in “Perfect Victim: The True Story of the Girl in the Box.” Twenty years later, Jim Green’s “Colleen Stan: The Simple Gifts of Life” covered the depraved slice of real life from a different angle.

Musicians have long looked to life’s dark side for creative juice. In 1989, “Black Leather Jesus,” an experimental noise group whose works explore S&M, found its name after founder Richard Ramirez read about “a woman who was held captive by a man who kept her under his waterbed for seven years,” he told the Houston Press in 2011. “He raped her and told her he was Jesus Christ.”

Blake Babies, an alt rock band formed in 1986 that has acknowledged a preference for making audiences “wince” instead of just “snapping their fingers,” released the song “Girl in a Box” in 1990. The title reveals the song’s roots and creepy details from the case emerge in the lyrics: “I’ve got a girl in a box/Keep her under my bed, it sure must be hot in the summertime.”

To learn more about the case, watch “Snapped Notorious: Girl in the Box,” airing Sunday, July 17 at 7/6c on Oxygen.