Sign Up for Free to View
'I Knew They Were Going To Find Her Guilty,' Jennifer Clark’s Lawyer Says 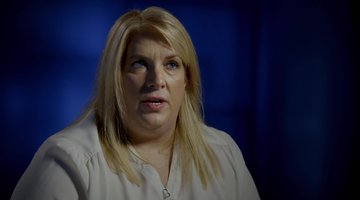 3:12
Exclusive
An Exclusive First Look At The Jennifer Clark Case 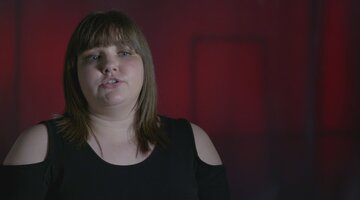 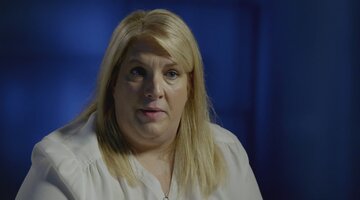 Now Playing
3:20
Exclusive
'I Knew They Were Going To Find Her Guilty,' Jennifer Clark’s Lawyer Says

Donald Clark never gave up on his wife, Jennifer. Not when she cheated on him and got pregnant with another man’s child, and not when she threatened him with a baseball bat. It was a fatal mistake for Donald.

Donald Eugene Clark was born in 1967, the second of three children. He grew up in rural Barnesville, Georgia.

“We hunted everything, deer, pigs, it didn’t matter. We had a lot of good times,” Donald’s sister Brenda Maddox told “Snapped,” airing Sundays at 6/5c on Oxygen.

In 1985, Donald left high school to work at a local mill. In his early 20s, he married a woman named Rebecca, with whom he had a daughter. They would later divorce, leaving him single again at the age of 29.

“He aspired to be a family man. His first one failed and he just wanted to start over,” Donald’s daughter, Nikki Nalley, told producers.

Then, in 1996, that chance seemed to present itself. Donald met 18-year-old Jennifer Leigh Drennan through a mutual acquaintance. They married in 1997 and had two boys, born in 1998 and 2000.

But by 2008, Jenny was pregnant again and this one wasn’t greeted with joy and anticipation.

“There was a lot of fights. There was good times but more bad times than good times,” Maddox told “Snapped.”

Donald and Jennifer divorced in July 2008. Jennifer moved in with her mother in West Virginia while Donald took care of the boys back home. However, the split was short-lived. They reconciled that October and she moved back in.

“No matter what, my Dad loved Jenny and he desperately wanted that family,” Nalley told producers. “He wanted to work it out.”

About a month later, it all ended.

Maddox walked into the Lamar County Sheriff’s Department on the evening of November 19, 2008 to report her 41-year-old brother missing. “Donald always called the whole family every day,” Maddox told producers. “At that point we hadn’t heard from him in a couple days.”

When questioned by police, Jennifer claimed Donald came home from work, they ate dinner, watched TV, and then went to bed. When she woke up the next morning, Jennifer said, he was gone along with his car. She later texted him to say she had dropped the kids off at school. “K,” he texted back.

Jennifer then said Donald might have left her for another woman, a theory those who knew him found ridiculous.

“I knew something had happened. Donald wasn’t the one to take off,” Jennifer’s father, Garry Drennen, told producers.

Investigators spoke to Donald’s boss, who had last seen him on the evening of Nov. 18, when they carpooled home. During the ride, Donald had said his reunion with Jennifer wasn’t working out and that he wanted her to leave.

They also interviewed a 24-year-old woman, Danielle Young, who lived with Donald after his split from Jennifer. He asked her to move in to help take care of his sons. Their relationship eventually became sexual. Young had concerns about their 17-year age difference and moved out. Soon after, Donald had reconciled with Jennifer.

Young told police that on the night of Nov. 18, Donald had called her out of the blue and discussed her moving back in with him.

Another bombshell about the Clarks' marriage soon dropped.

On Nov. 25, 2008, Jennifer Clark gave birth to her third son. An announcement in the local newspaper listed the father as Kenneth Michael Yost, not Donald Clark.

Yost dropped out of school in the eight grade and had been arrested several times on marijuana charges, according to Walter Geiger, a journalist at The Herald Gazette newspaper.  Afterward, Charlie had asked Donald if Yost could stay with him.

While living with the Clarks, Michael and Jennifer had an affair. When Donald found out, he kicked them both out.

Detectives decided to execute a search warrant at the Clarks' home on Dec. 4, 2008. Crime scene technicians found blood on the mattress in the master bedroom.

“When [Jennifer] was asked about the blood she stated that that was life with boys,” former Georgia Bureau of Investigation Special Agent Cayce Ingalls told producers. “Jennifer Clark’s story was not very believable to us.”

Investigators also learned that in March 2008, Donald had called police after waking up to find Jennifer standing over him ominously with an aluminum baseball bat, local newspaper Henry Herald reported in 2011.

Then, on December 23, 2008, detectives received a call from a man who had found his dog chewing on a wallet it picked up in the woods. “In that wallet contained Donald’s ID,” Lamar County Sheriff’s Captain Chris Webster told producers.

Investigators searched the area, which was a short distance from Yost’s mother’s house. In a kudzu patch on the side of the road, they found an aluminum baseball bat.

“We already knew that Jenny had threatened Donald with a baseball bat so finding the bat, we knew that potentially we had found the murder weapon,” Ingalls told “Snapped.”

The body of Donald Clark was found next, on the afternoon of December 24. He was wrapped in a blanket and covered with debris, local outlet Barnesville Dispatch reported at the time.

“He had a plastic bag over his head. Of course his head was just ... battered. That was a clear indication that not only was he hit with a blunt object very hard, he was hit multiple times. It was an ugly mess,” former prosecutor Richard Milam told producers.

Jennifer Clark and Michael Yost were arrested and charged with murder after the discovery. They immediately turned on each other.

"Each is saying the other hit Donald in the head with the bat,” lead investigator Rick McCreary explained to Barnesville Dispatch after taking them into custody Christmas Eve.

Jennifer claimed she was asleep in bed with Donald when she heard the back door open. Yost entered the bedroom and she ran to protect her sons, she said. After Yost beat Donald to death with the baseball bat, he forced her to help him clean up.

In another interview room, Yost was telling a very different story. He said that his relationship with Jennifer had continued even after she moved back in with her ex-husband. On the night of the murder, Yost claimed, Jennifer called him around 1 a.m. and asked him to come over. When he got there, he was surprised to find Donald Clark at home asleep in his bedroom.

“Michael Yost’s story is that Jennifer Clark then hits Donald Clark in the head with the baseball bat,” Ingalls told producers. “Michael then recalled that Donald made gurgling noises at which time he heard Jennifer hit Donald Clark approximately two more times.”

While Jennifer stayed at the house cleaning up the murder scene, Yost said he dumped the body and murder weapon and used Donald’s phone to send a text message.

“At this point it becomes irrelevant who actually hit Donald with the bat. They formulated a plan together. They both conspired to kill him,” Webster told “Snapped.”

With his trial looming, Yost pleaded guilty in October 2009 to felony murder, concealing the death of another, and tampering with evidence, according to the Henry Herald. He was sentenced to life in prison and is not eligible for parole until 2039 when he will be 53 years old. He also agreed to testify against Jennifer.

Jennifer Clark went on trial in early 2011. She testified on her own behalf. It wasn’t a good idea.

“She had an outburst. She jumped up and said that the only good thing about Michael Yost was what was between his legs. Screamed it in the middle of the court,” Nalley told “Snapped.”

After deliberating for less than an hour, a jury found Jennifer Clark guilty on all counts on Feb. 4, 2011.  She was sentenced to life in prison plus 60 years.

For more on this case and others like it, watch “Snapped,”  airing Sundays at 6/5c on Oxygen, or stream episodes any time at Oxygen.com.

Murderess 'Resented Being A Nursemaid' For Hurt Husband