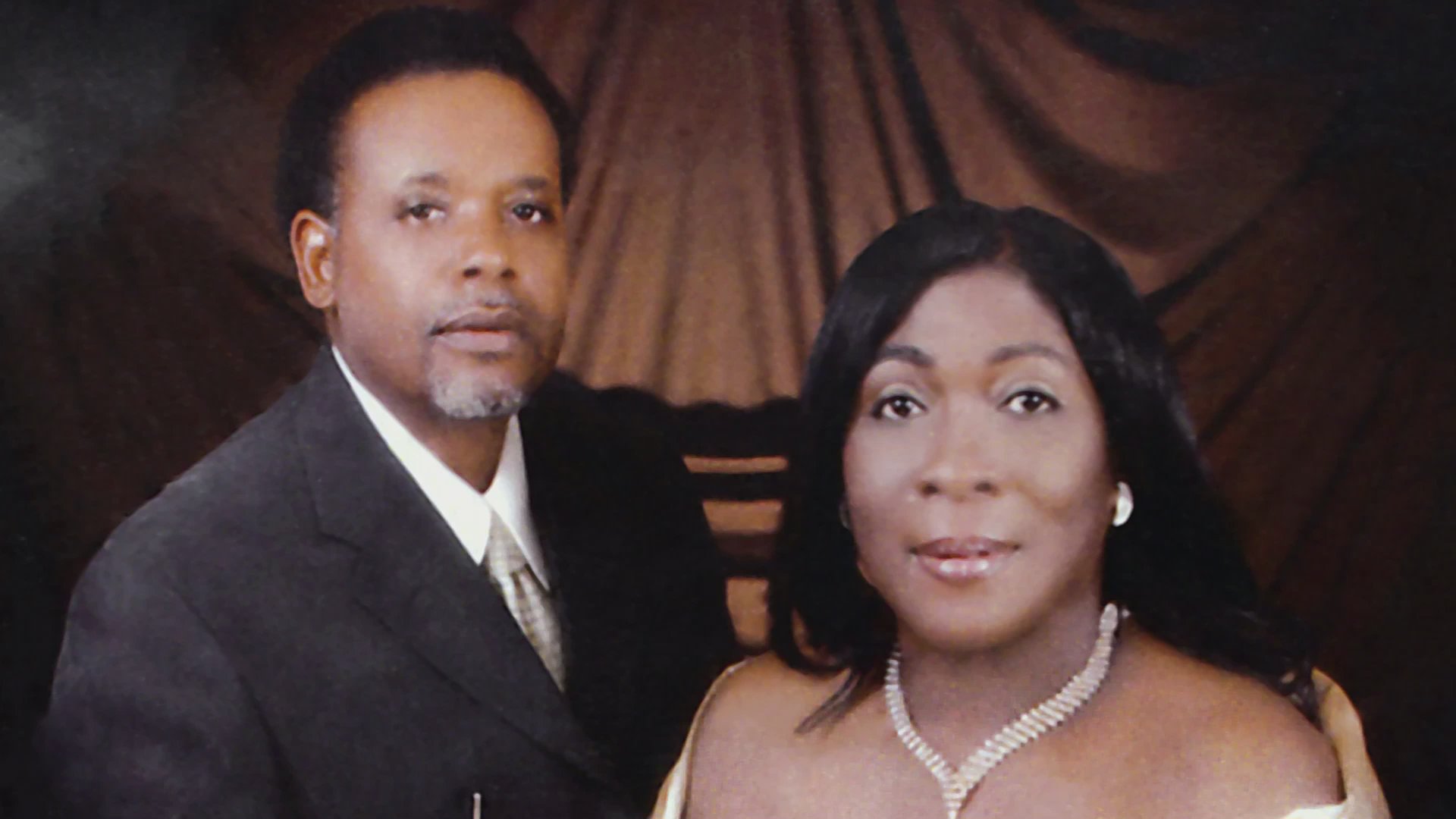 On the morning of Nov. 4, 2009, Lorraine Hunter called the trucking service where her husband, Albert Thomas, worked in a panic.

She had not heard from Thomas since the previous night, and she was growing concerned. When his truck was finally located, a co-worker found Albert inside the cab, dead from four gunshot wounds.

Investigators initially assumed Thomas had been the victim of a robbery gone wrong, but as they dug deeper into the case, they discovered he wasn’t the first of Hunter’s husbands to be mysteriously gunned down.

Before meeting Hunter, Thomas had been married to his high school sweetheart, with whom he had a daughter. Thomas supported his family with a factory job, later becoming a truck driver.

The time away from home, however, took a toll on his marriage, and the couple ultimately divorced after many years together. Following their separation, Albert began seeing childhood acquaintance Lorraine Alison Hunter.

Hunter had experienced her fair share of hardship and tragedy. By the time she married truck driver Allen Brown, she was a single mother of two boys. Although the couple was together for 10 years, their relationship had its ups and downs.

During one of their breakups, Hunter became pregnant by another man, and in 1993, she gave birth to a girl, Briuana Lashanae Hunter.

Lorraine and Brown reconciled, but he was later shot to death in Inglewood, California, in 1996, according to Riverside County’s Press-Enterprise newspaper. It was thought to be a random act of violence or an attempted carjacking, and no suspects were ever arrested for the crime.

With her two sons grown and out of the house, Lorraine raised Briuana as a single parent. They later moved in with the family of her friend, Na-Tisha Brown (no relation to Allen Brown).

“She was good at cooking and sewing and baking,” Na-Tisha Brown told “Snapped.” “She was able to help out. She picked up really quick. She was smart.”

Three years after her first husband’s murder, Lorraine was once again a bride-to-be after reconnecting with Albert in Mississippi. He subsequently relocated to California, where they were married.

Albert took two jobs to support the family and came to love Briuana as if she were his own daughter.

“He gave her the world. He took excellent care of her. Briuana never wanted for anything,” Na-Tisha Brown said.

Briuana would later describe Albert as being a "calm, quiet person," saying he “was the only father figure I knew,” according to California News Wire Services.

The first sign of trouble was when Albert missed a delivery that morning.

“Albert was a dependable, very responsible individual who worked for me, and he was never late,” former Transport Services Supervisor Don Moore told “Snapped.” “When I pulled up Albert’s truck and saw the truck hadn’t started, that’s when I got concerned.”

Lorraine was also concerned. She called Albert’s work and asked if they knew where he was, explaining that she had not seen him since the night before.

The truck’s GPS showed it was in Moreno Valley, California, and co-worker Richard Segrist was dispatched to see what was wrong.

“His driver side door was wide open. I went through the open driver’s door and I was thinking something was up,” Segrist told “Snapped.” “He was right behind the driver’s seat. He was on his knees, and he was all the way forward ... As soon as I seen him, I knew he was dead.”

The truck’s location was where Albert usually parked it off-hours, just a few blocks from where he lived.

“The first thing you think is robbery. And the way he was found, could have definitely been a robbery,” retired Riverside County Sheriff’s Detective Ken Patterson told “Snapped.”

Nothing notable, however, was missing from his truck, and no shell casings were found at the crime scene. Patterson spoke to Lorraine and Briuana while authorities canvassed the area, but they could locate no further witnesses or evidence.

The medical examiner determined Albert had been shot four times by a .38 caliber revolver.

Patterson called Tena, who told him about Allen Brown’s murder in 1996.

“When I spoke with Mr. Thomas’ sister and daughter from Mississippi, they told me that they suspected Lorraine had killed her first husband,” Patterson told “Snapped.”

On the day of Brown’s murder, he and Lorraine were visiting her niece in Inglewood. As they were leaving, they experienced some car trouble. Allen got out and looked under the hood, and that is when he was shot.

“When police arrived, Allen told police that he got shot in the back, but he didn’t identify who had shot him,” Robinson told “Snapped.”

He died at a hospital several days later. Following Brown’s death, Lorraine received more than $300,000 in life insurance proceeds. No charges were ever filed against Lorraine in Brown’s murder, and the case remains open.

Through his job, Albert had a life insurance policy worth $225,000. This amount was set to double in the event of his murder.

When Patterson initially spoke with Lorraine, she claimed she was not aware of any life insurance policies. Albert’s boss Moore, however, said on the morning Albert was found dead, she had called him to inquire about his policy.

“The fact she was calling about life insurance so quickly just stunned me,” Moore told “Snapped.” “I mean, personally, myself, that’s the last thing I’m thinking about.”

Albert also had additional life insurance policies, which combined totaled more than $1 million, according to the Press-Enterprise.

Patterson asked Lorraine to take a polygraph test, which she agreed to, but on the day it was scheduled, she never showed up. A lawyer subsequently sent Patterson a letter telling him cease contact with Lorraine.

The case went cold for two years until Lorraine’s niece, Shaniece Hunter, was arrested for shoplifting, reported Press-Enterprise. She said she had information about Albert’s murder, claiming that Lorraine and Briuana were both involved.

“She said that she overheard Briuana say something to the effect of, ‘Are you sure we have to do this?’ to her mother, Lorraine. And Shaniece said, at that time, Lorraine told her daughter Briuana, ‘Yes, he’s gonna leave us, and we don’t have any money,’” Robinson told “Snapped.”

Both Lorraine and Briuana were brought in for questioning, and during her interrogation, Briuana told detectives her mother had killed her stepfather. She said on the night of the murder, she went with her mother and stepfather to Albert’s truck, where he had a sweatshirt that he bought for her.

All three got in the cab, and when Albert bent over to retrieve the sweater, Lorraine shot him in the back, according to the Press-Enterprise.

Briuana, who was 16 at the time of the murder, told detectives her mother had intended to kill Albert on three other occasions, according to the Press-Enterprise. She also admitted helping her mother fill out at least three life insurance applications in Albert’s name which designated Lorraine as the beneficiary and witnessed her mother forge her stepfather’s signature.

Authorities learned Lorraine had obtained a gun from a friend at her church to commit the murder, later returning it. A search warrant was later executed resulting in the discovery of the .38 caliber revolver that killed Albert.

Lorraine and Briuana were arrested in October 2011 and held on $1 million bail, according to the Press-Enterprise.

“Both of them were charged with first degree murder, also conspiracy to commit murder, and then, Lorraine was charged with the special circumstances, alleging that the murder was committed while lying in wait, and then, also, that she did it for financial gain,” Robinson told “Snapped.”

While awaiting trial, Lorraine tried hiring a hitman to kill her niece Shaniece and prevent her from testifying against her. Upon learning about the plot from a jailhouse informant, authorities set up a sting operation with an undercover officer.

“This undercover officer had several conversations that were recorded, with Lorraine Hunter, where Lorraine Hunter, in fact, confirmed that she wanted her niece Shaniece dead, and that she was willing to pay money to do it,” Robinson told “Snapped.” “That investigation was concluded, and our office filed a separate case against Lorraine Hunter, for solicitation for murder.”

Lorraine went on trial for the murder of Albert in August 2017 with her daughter Briuana as the prosecution’s star witness.

“I don’t want to be up here testifying against my mother,” Briuana said, according to the Press-Enterprise. “But it’s the right thing to do after what happened.”

It took the jury three hours of deliberations to find the 61-year-old guilty of first-degree murder and conspiracy, and they also found true special circumstance allegations of lying in wait and killing for financial gain, according to the Press-Enterprise.

Lorraine was sentenced to death in December 2017, after a judge agreed with the jury's recommendation to do so, according to California News Wire Services.

After pleading guilty to three counts of attempted murder and one count of voluntary manslaughter in connection with the slaying of Albert, Briuana was sentenced to 18 years and four months in state prison, according to the Press-Enterprise.

Now 26, she is currently incarcerated at Central California Women’s Facility and will be eligible for parole in June 2026.

In March 2019, California Governor Gavin Newsom issued a moratorium on capital punishment, suspending executions in the state for the time being. Lorraine is now 64 and incarcerated at Central California Women’s Facility, the same penitentiary as her daughter.