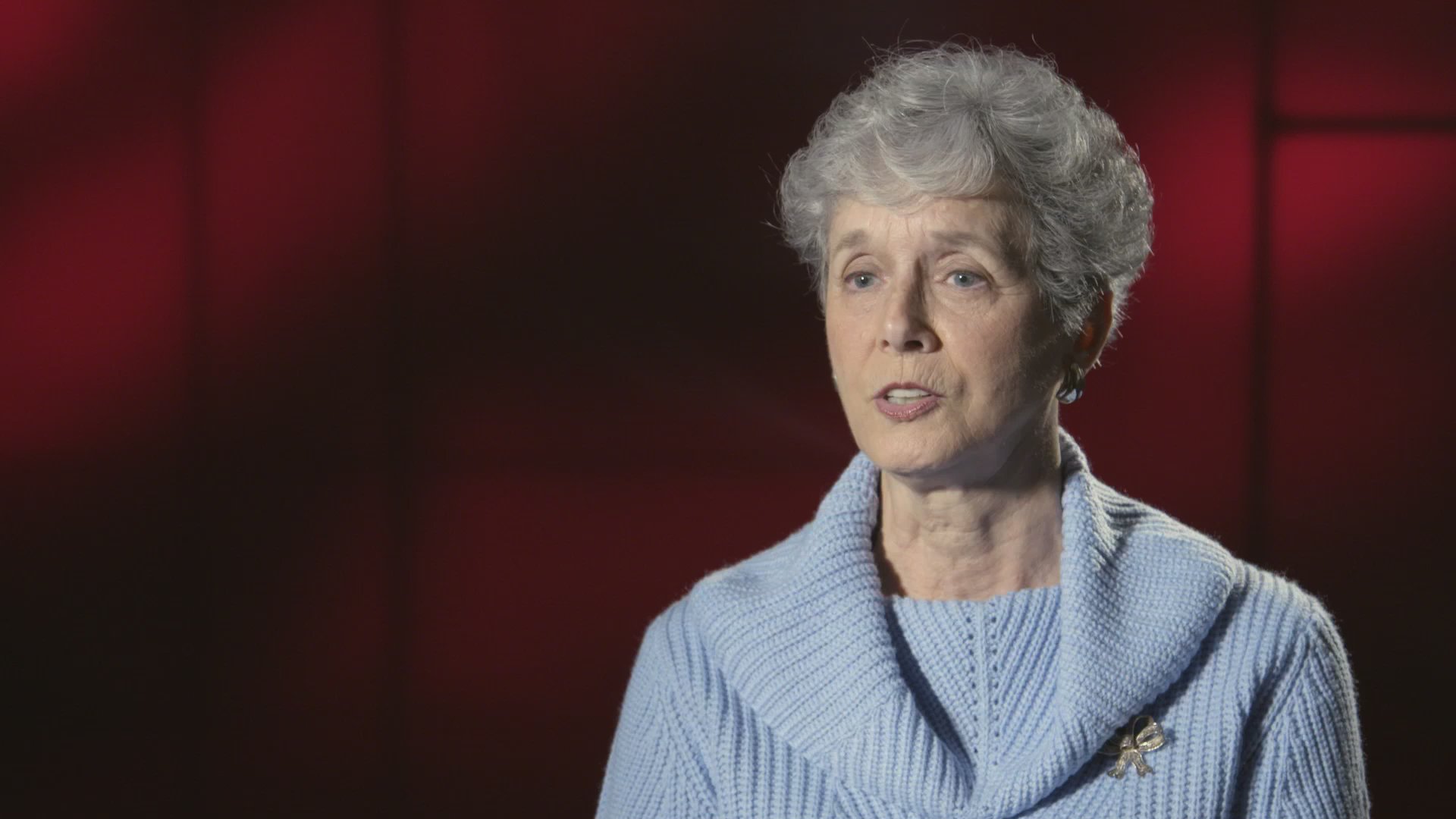 In the early morning hours of April 21, 1988, a distress call went out over CB radio near Roanoke, Virginia. A woman named Frances Truesdale claimed her husband, Jerry, had just been shot, according to “Snapped,” airing Sundays at 6/5c on Oxygen. As concerned citizens and police arrived on the scene, she told different stories of what happened, and Jerry Truesdale would die from his wound two days later.

During the investigation, authorities learned that Frances Truesdale was one of many names she had used over the years, and that Jerry was not her first husband to die under suspicious circumstances.

More than 20 years earlier, Frances Truesdale was known as Sandra Beasley, and lived in Winnsboro, South Carolina, a small town with a population of about 3,500. Her husband, Ronald Beasley, was a welder whom most people knew by his nickname “Little Red.” It was one of at least four marriages for Sandra, who went by nine different names over the course of her life and give birth to five sons, according to North Carolina’s News & Record newspaper.

One of Ronald Beasley’s best friends was Herman Young, who in 1965 became the first black police officer with the Winnsboro Police Department, according to local newspaper The Independent Voice. Ronald was white and, while interracial friendships were rare in those days in the Deep South, the two forged a strong bond while working together at a local garage building cars.

“I was so close to the family that [Ronald’s] mom and dad actually called me their son," Young told Columbia, South Carolina NBC affiliate WIS10 in a 2010 interview.

Tragedy struck the Beasleys in 1967, soon after the birth of their son. Ronald, only 29, had a massive cerebral hemorrhage that resulted in almost complete paralysis. He could no longer feed himself and had only slight movement in one hand. He wore diapers and required around-the-clock help. A relative said he was unable to recognize her or their 9-month-old child, according to the News & Record.

The family was hit with yet another misfortune in July 1967, when Truesdale told police Ronald had committed suicide after taking a .22-caliber rifle off the wall and shooting at her. She claimed he slit one of his wrists before putting the barrel of gun in his mouth and pulling the trigger.

Herman Young immediately thought the story didn’t add up, saying to the Associated Press, “Shooting himself was physically impossible for him. How could he do it?”

Despite rumors flying around town that Sandra was sick of taking care of her invalid husband, the coroner’s report said, “Death caused by self-inflicted wound.” It didn’t sit right with Ronald’s parents, but there was little they could do.

“We didn’t feel we could get any justice in this little town,” father K.C. Beasley told the Los Angeles Times. The family worried that if they pressed for an investigation, they’d never see their young grandson ever again.

Young was a pallbearer at his friend’s funeral. Afterwards, he went to pay his condolences to the widow.

“I went by the house to tell Sandra I would be there if she needed some help with anything and when I drove on the yard, they were having a party inside the house,” Young told WIS10. “I sat there and cried.”

Sandra married Jeffrey “Jerry” Daniel Truesdale about a month after burying her husband, and she soon began going by the name Frances Truesdale. The couples would later relocate to Winston-Salem, North Carolina, where they ran a service station for some time, according to the News & Record.

By the late 1980s, Jerry was working as a long-distance truck driver for a company based in Pennsylvania and spent most of his time on the road. Friends said he had recently been suffering from severe back pain and was considering quitting his job, according to the News & Record.

He went on a two-week vacation in April 1988, later meeting up with Frances in Virginia for the drive back home to Winston-Salem. It was a drive he would never finish.

Frances Truesdale would later tell authorities that in the early morning hours of April 21, 1988, she and Jerry pulled over at a rest stop near Roanoke, Virginia. There, she claimed, they were accosted by two men who asked them for money. When one of the men touched Jerry on the arm, Frances said her husband struck him in the mouth, according to court documents.

Frances claimed they left the rest stop, driving south, but the men followed them in a Ford Grenada with New York plates with “RUD” in the license number. Jerry decided to exit the highway, and the men pursued them, according to Frances.

Both cars pulled over and Jerry said, “I have had enough,” and jumped out of the Truesdales’ van. In the subsequent confrontation, Frances claimed one of the men shot Jerry in the head with a pistol, according to court documents.

Frances put out a distress call over her van’s CB radio, and a man named Clarence Crouch, Jr. was the first to respond. He later testified that when he found her on the side of the road, the inside of the van smelled like gunpowder, and Frances said repeatedly, “I didn't mean to do this,” according to court documents.

When Roanoke City Police arrived, they found Jerry Truesdale lying on his back, between two seats, in the back of the van. He had a single gunshot wound from a .22-caliber pistol behind his left ear but was still alive, according to the Roanoke Times. He was taken to Roanoke Memorial Hospital, where he died two days later, on April 23, 1988, at age 41.

As Frances spoke to family, friends and law enforcement, she gave differing accounts of what happened — and different descriptions of the gunmen. She was then interviewed by Virginia state police, who contacted New York’s Department of Motor Vehicles and found no registered Ford Grenada automobiles with "RUD" in their license tag on file, according to court documents.

Authorities asked Frances if Jerry had any life insurance policies, and she told them he had a single policy worth $25,000. In fact, there were myriad policies in his name, worth a combined $285,000, of which she was the sole beneficiary, according to the Roanoke Times.

Following Jerry’s death, Frances relocated to the town of Carolina Beach, North Carolina, where she opened a restaurant called Ye Old Smokehouse, according to the News & Record. It closed in summer 1990, but by then, she had much bigger things to worry about.

In November 1990, after a two-year investigation, Frances Truesdale was arrested and charged with her husband's death, as well as use of a firearm in commission of a murder, according to the News & Record. She was found guilty of second-degree murder in 1992 and sentenced to 20 years in prison, according to the Associated Press.

That same year, Herman Young was sworn in as Sheriff of Fairfield County, South Carolina, and he decided to reopen the investigation into Ronald Beasley’s 1967 death, according to The Independent Voice.

"After becoming sheriff, I was in a position where I could have someone look into this," Young told WIS10.

Almost 30 years after the death of Ronald “Little Red” Beasley, a Fairfield County grand jury indicted Frances Truesdale for his murder in January 1996, according to the Los Angeles Times. In November of that year, she was found guilty and sentenced to life in prison, according to the Deseret News.

"I'm glad this is over with," Little Red’s 80-year-old father K.C. Beasley told reporters. "I know the family feels better knowing that Red's death was murder and not a suicide like they said."

Although she was convicted of murdering two of her husbands, in the ensuing years Frances Truesdale repeatedly came up for parole. Each time she did, Sheriff Herman Young was there to tell them, “Don’t grant her parole,” according to WIS10.

In July 2014, Truesdale died while still incarcerated at a state penitentiary in Virginia. Two weeks later, The Independent Voice announced Herman Young was retiring from his post as Fairfield County Sheriff at age 72.