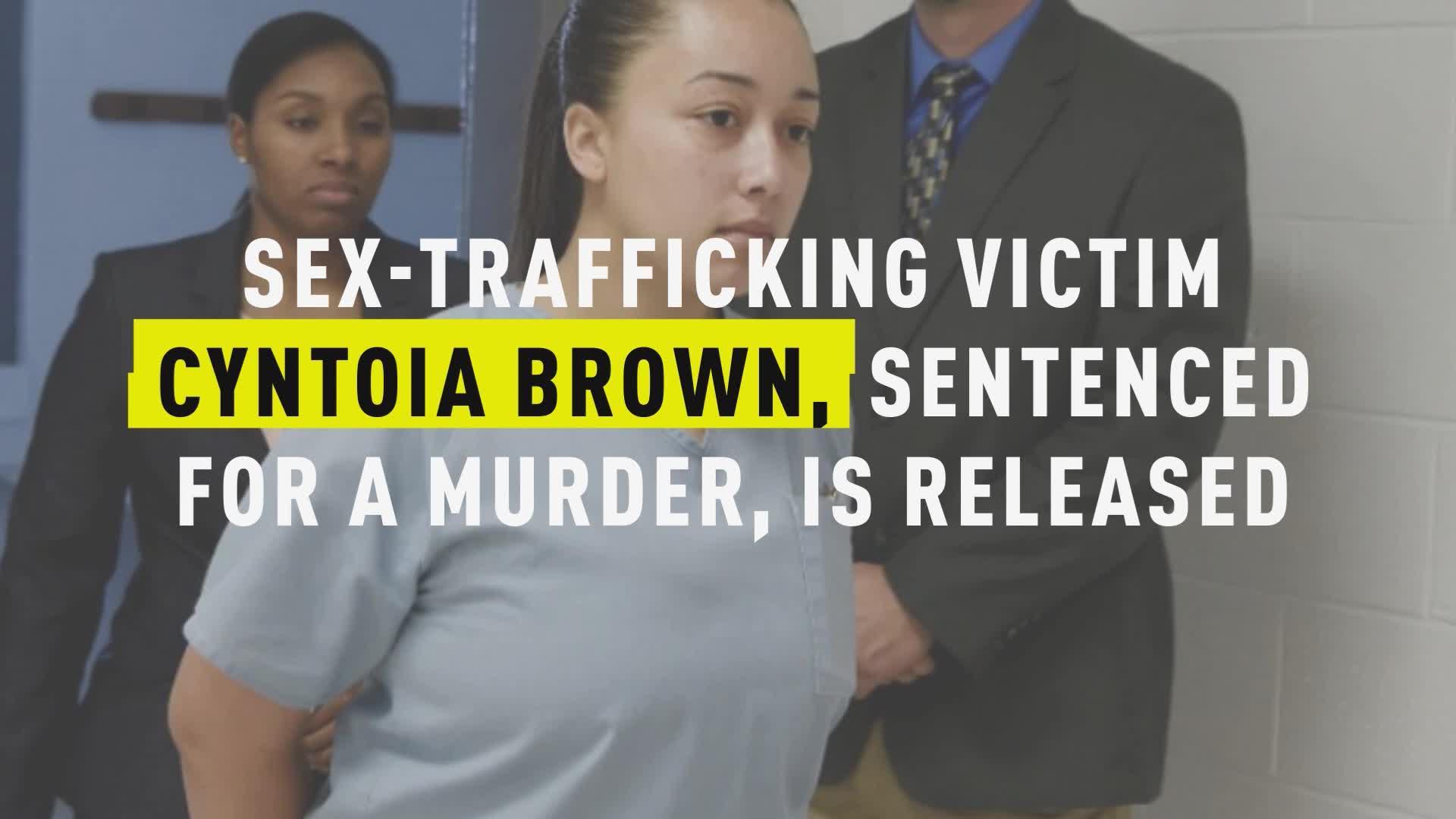 Cyntoia Brown was just 16 years old when she was accused of killing a Tennessee man who'd paid her for sex. Since then, she's made a remarkable journey from a seemingly open-and-shut murder conviction to a newfound career as an advocate for victims of sex trafficking.

Brown's story is documented throughout Netflix's "Murder to Mercy: The Cyntoia Brown Story," which uses archival interview footage of Brown, along with conversations with attorneys and people close to her.

Who Is Cyntoia Brown?

Brown had a troubled childhood, having run away from her adoptive family in 2004. That year, she moved in with a man named Garion McGlothen, who was also known by the aliases "Kut Throat" or "Cut Throat," according to The Appeal and The Associated Press. McGlothen soon began verbally and physically abusing her, which culminated in him forcing her into prostitution for his financial gain.

Later in 2004, a 43-year-old Tennessee real estate agent named Johnny Michael Allen picked up Brown, then just 16, at a drive-through and brought her back to his home for sex. Brown said Allen told her he had been a military sharpshooter and showed her his collection of rifles, a move she interpreted as a means of intimidation. At some point during the night, she fatally shot Allen in his bed, telling investigators that she thought that he had been reaching for a gun and feared for her life.

The authorities saw different, however. Prosecutors argued Brown intended to rob Allen and evidence showed she took his truck, wallet and guns. Nashville Police Det. Charles Robinson, one of the first to interview Brown in 2004, previously told the AP that her story didn't match up "with what I saw in the crime scene, bottom line. And that's how I knew she was lying."

Brown was charged with murder and, despite her lawyer's argument that she was a victim of sex-trafficking, convicted in 2006. She was sentenced to life in prison.

McGlothen was killed in a 2005 shooting, according to local news outlet The Chattanoogan.

Her time behind bars

Brown began going through the process of petitioning for post-conviction relief with the help of new attorneys in 2012, according to the documentary. She noted to interviewers that she'd used her time in prison to pursue an associate's degree from Lipscomb University in Nashville, explaining that instructors from the school would teach classes at her prison once a week. She said that prison had given her time to reflect on the actions that led her there.

Her petition for post-conviction relief was unsuccessful, although the court agreed she had potentially mitigating circumstances in her case. Her lawyers and the court pointed to Brown's childhood, where she was born to a mother who admitted to drinking whiskey and smoking crack cocaine while she was pregnant with Brown, according to previous reporting from The New York Times.

Her case again garnered local media attention following a change in Tennessee state law in 2017 that would have classified her as a victim of sex-trafficking rather than a prostitute, but she remained behind bars, the documentary recounted.

Her story went on to spread across social media and a number of activist groups and celebrities rallied to Brown's cause. In 2017, Kim Kardashian West tweeted: "It’s heart breaking to see a young girl sex trafficked then when she has the courage to fight back is jailed for life! We have to do better & do what’s right. I’ve called my attorneys yesterday to see what can be done to fix this."

Brown's attorneys noted there was also a political element to consider, as then-Tennessee Gov. Bill Haslam would be leaving office in 2019, freeing him to make commutations, pardons and acts of clemency that are common in a head of state's last year in office.

"The most general description is that she has grown up, both intellectually and socially. ... She had learned a lot," Bernet told the documentary, noting that Brown had even begun studying the topic of trafficking.

Many others joined in the call for Brown's release, which reached a fever pitch in December 2018 when the the Tennessee Supreme Court ruled Brown would have to serve 51 years in prison before she would be eligible for release, NBC News reported in early 2019. That timeline would put Brown in her mid-60s before being released.

Where Is She Now?

Brown, at 31 years old, was released from prison after Haslam's decision in January 2019.

“Cyntoia Brown committed, by her own admission, a horrific crime at the age of 16," Haslam said in a statement, according to The Tennessean. "Yet, imposing a life sentence on a juvenile that would require her to serve at least 51 years before even being eligible for parole consideration is too harsh, especially in light of the extraordinary steps Ms. Brown has taken to rebuild her life."

While serving her sentence, Brown met Jaime Long, a Christian rapper who performs under the name J. Long, and the couple married after her release.

Brown, who now goes by her married name Cyntoia Brown-Long, didn't authorize the documentary, she said in a statement on Instagram and other social media platforms — adding that she hasn't seen it but hopes it will highlight the need for reform in the criminal justice system.

"While I was still incarcerated, a producer who has old footage of me made a deal with Netflix for an UNAUTHORIZED documentary, set to be released soon," she said in a statement. "My husband and I were as surprised as everyone else when we first heard the news because we did not participate in any way."

"However, I am currently in the process of sharing my story, in the right way, in full detail, and in a way that depicts and respects the woman I am today," Brown continued.

Later on, however, Brown deleted the posts critical of the Netflix documentary. Brown will reportedly now be promoting the film along with her book, a spokesperson for Netflix told The Daily Beast.

Brown has not responded to further requests for comment from Oxygen.com.

After her release, she gave her first post-release television interview to the NBC Nightly News.

“There's nothing special about me. There's, I can't tell you how many Cyntoia Browns still in prison,” she said. “The women who helped me get to this point, they're still in prison for 51 years and up with ridiculous sentences. And they don’t have hope right now.”

She also admitted culpability for Allen's death in the interview, arguing she was expecting him to be violent toward her without any real proof.

“I think back on the past few weeks, the previous weeks. And always feeling like, you know, violence was around the corner. Always feeling like I had to defend myself,” Brown said. “Expecting, you know, for men to be violent towards me. And, you know, there's times I wonder, like, was I really, like, in real life in danger? Or was that just in my head?”

She now works with the Ambassador Speakers Bureau, a Christian public speakers organization based in Tennessee. She speaks for a number of religious causes, addressing an anti-abortion rally earlier this year, according to the Religion News Service newswire agency.

Brown also works to advocate for other victims of sexual abuse and trafficking, speaking in support of Chrystul Kizer earlier this year, according to BuzzFeed News. Kizer confessed to shooting Randy Volar in 2018, also at the age of 16, saying she was being sexually abused and trafficked by the man

The Tennessee Department of Corrections confirmed to Oxygen.com that Brown is still under parole supervision.

Cyntoia Brown Says There Are Many Others Like Her Behind Bars