Sign Up for Free to View
Shocking Fraud and Scam Cases 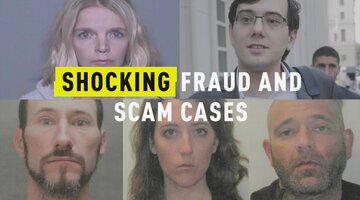 For Robin Colombo, meeting Gennaro "Jerry" Colombo for the first time was electric.

"The first time I met Jerry, we looked at each other ... the chemistry between us was crazy," she recalled of her 1995 meeting with her soon-to-be husband in the HBO documentary "McMillion$," which details the McDonald's Monopoly scandal from the late 1990s. "I was having a long-distance relationship with a federal agent, who was not that fun, and jewelry was fun. So I chose him [Gennaro]."

The pair got engaged within two weeks and were later wed in Panama City, Florida, with a baby already on the way. "It wasn't as extravagant as you would think," she recalled of the wedding.

Robin, along with her late husband, soon became part of the McDonald's Monopoly crime circle where they played a central role in furthering the fraud. The two would select winners they deemed worthy or in need of the cash winnings, and would subsequently take pay cuts from "winners" picked from a growing circle of friends and family that received the prizes.

The pair worked in tandem with the scheme's mastermind Jerome "Uncle Jerry" Jacobson, whole stole the winning game pieces through his work for a McDonald's contractor and gave them to Gennaro and Robin to distribute.

"What's out there now has only scratched the tip of the iceberg," Robin's manager Lawrence Snead told Oxygen.com. "There's so much more that's coming out with the 'McMillion$' series than what meets the eye."

In the docu-series, Robin recalls that she wanted to "make people happy" and played an active role in choosing "winners." Among the $1 million winners in her own family was her father, Buddy Fisher. A military man who had never broken the law before, he was also indicted for his role in the scheme prior to his death in 2008.

"I felt terrible for him," Robin tearfully recalled on "The McMillion$ Podcast." "I just wanted to give him a big hug ... he was never the same after getting caught."

Over the course of the scheme, Robin's relationship with Jerry also began to crumble. Robin found out he had a mistress, and she became more physically aggressive towards him.

She didn't leave, however, because "Uncle Jerry" stepped in every time, even going so far as to propose to her over the phone. She refused and stayed with her husband.

But in 1998, Robin, Jerry, and their son Francesco got into a serious car crash on the Georgia freeway. Jerry later died of complications from the crash, leaving Robin alone to deal with the consequences of the couple's involvement in the scheme.

Robin was ultimately among the 21 people indicted by the FBI in the Monopoly scheme, which defrauded McDonald's out of over $20 million. She was initially charged with a count of conspiracy to commit mail fraud and multiple counts of mail fraud, the Orlando Sentinel reported.

Before her sentence was announced, Robin saw that she would be doing prison time for her role in the crime ring and made an attempt to run out of the court room, according to The Daily Beast. She was ultimately sentenced to 18 months in prison.

During her time in the Tallahassee Federal Correctional Institution, she met and become friends with Mery Valencia, the former Colombian drug trafficker known by the moniker "La Señora."

"They shared cakes and Robin learned about the cartel," Snead said.

Robin turned to the Bible while in prison and subsequently published her life story, "From a Mafia Widow to God's Child," in 2006 with Ed Colton. A new edition of the book will more details from Robin's personal life will be available to the public after the "McMillion$ wraps up on March 9.

"Author/ of mafia widow On sale after March 9 the after the doc. Of mcmillions ends on HBO. Then it's full force," Robin writes in her Instagram bio.

"She is working on bettering herself," Snead said of his client's current life in Florida. She has also taken to a new role in life: Grandma.

Her son Francesco Gennaro has a 2-year-old daughter Lilah, and her daughter from a previous marriage Jennifer Ethridge has a 19-year-old son Tyler, who raps under the name Slugga Tee.

What Happened To Jerome Jacobson Of 'McMillion$'?

What Happened To Gennaro Colombo In HBO's McMillion$?