Sign Up for Free to View
Keith Raniere, Founder of NXIVM, Found Guilty of All Charges 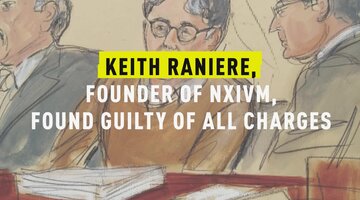 India Oxenberg, the daughter of "Dynasty" star Catherine Oxenberg, is speaking out about her time in NXIVM, including her ordeal being branded with the initials of leader Keith Raniere as part of an initiation into a secret group within the organization that was based on master-slave relationships.

“I had two women holding my hands and my feet so I wouldn't convulse," India, 29, told People about night in 2016 that she was branded so she could be initiated into the clandestine group known as DOS.

"I remember the smell — of flesh," she recalled. "I remember crying but not with pain. There was no choice to say no."

NXIVM was thrust into the spotlight in 2017 after several former members blew the whistle on DOS in a shocking New York Times expose. DOS, short for the bastardized Latin phrase “Dominus Obsequious Sororium,” which supposedly stood for “Master Over Slave Women,” was essentially a pyramid scheme of "masters" and "slaves" with Raniere serving as grandmaster. Its members made a vow to obey their masters and were forced to turn over monthly collateral — dirt on themselves or loved ones — to ensure they did so. Women who became slaves were asked to recruit even more slaves to serve under them.

India told People that Mack, with whom she shared an apartment during her NXIVM days, had power over her.

"She had a lot of power and control over me and I was scared of her but she can't hurt me anymore," she said. “I think in a lot of ways she saw herself as a kind of Joan of Arc character, willing to fall on a sword for Keith."

When Catherine learned about the trouble India was in, she tried to rescue her from the group, as HBO’s docuseries “The Vow” details. While India resisted her mother's efforts at first, she eventually left the group in 2018 following Raniere's arrest. Raniere was convicted last year of racketeering, sex trafficking, and other charges and is currently awaiting sentencing.

India got sucked into the group after her mom brought her to a NXIVM workshop in 2011 when she was just 19. The company billed itself as a self-improvement organization that offered workshops and classes aimed at unlocking participants' potential. They had centers across North and South America and put extra effort into convincing celebrities to join and raise the group's profile.

DOS secretly evolved within the group, with the supposed goal of empowering female members.

"The circumstances pushed us to our limits, to the point where you would think you were making the choice to get branded," India said.

For the past two years, India has been undergoing both intensive therapy and deprogramming to overcome the trauma she endured, she told People.

"People ask how could this happen, but it doesn't happen right away,” she said. ”It's a slow drip of indoctrination and grooming."

India said she is grateful for her mom’s persistence in getting her out of the group.

“And the fact that I get a second chance to actually just have my life and be like a normal 29-year-old — and not have everything be lost, and be one of these women that is going to spend the rest of their life either in jail or under house arrest, or with the mark of Keith Raniere — is remarkable to me that I get to have this. And that's because of what she did.”

Who Is Susan Dones, Former NXIVM Member Sued By Group?