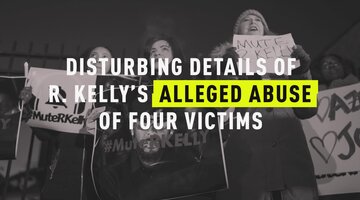 R. Kelly was released from jail over the weekend after an unknown party paid more than $100,000 in back payments for child support on behalf of the embattled singer.

Kelly, born Robert Kelly, was taken into custody in Cook County, Illinois on Wednesday during a child support hearing after he came to court prepared to pay only $50,000 to $60,000 of the $161,000 in he owed to his ex-wife, Andrea Kelly. The arrest was his second in less than one month.

Kelly regained his freedom on Saturday, after a person whose identity has yet to be publicly disclosed paid off Kelly’s child support debt, according to the Associated Press. Kelly’s mystery benefactor delivered a check for $161,633 — the full amount Kelly owed — to the Cook County Clerk’s Office, but said that they wished to remain anonymous, according to the news organization. The portion of the bond paperwork where the person’s name and relationship to the inmate was left blank, Cara Smith, the chief policy officer for the Cook County Sheriff’s Office, told the outlet.

“I promise you, we’re going to straighten all this stuff out,” Kelly said to reporters after his release, according to the AP.

The 52-year-old singer’s latest arrest comes less than three weeks after Kelly was arrested and taken to the same jail on criminal sex abuse charges and struggled to make bail. Prosecutors claim that Kelly’s alleged victims range in age from 14 years old to 23, according to court documents. Adding to Kelly’s legal troubles, prosecutors have already been given two sex tapes that allegedly show Kelly sexually abusing an underage girl, with attorney Gloria Allred, who represents a number of Kelly’s alleged victims, announcing on Sunday the existence of a third tape.

Kelly has denied all the accusations against him, most recently doing so during an explosive interview with “CBS This Morning” last week.

“Stop it. Y’all quit playing! Quit playing! I didn’t do this stuff! This is not me!” he yelled during the interview, speaking directly into the camera for much of the time.

Kelly’s girlfriends Azriel Clary, 21, and Joycelyn Savage, 23, also defended Kelly in an interview with the same network the following day, and accused their parents of lying about Kelly for money.