Sign Up for Free to View
R. Kelly has been charged with criminal sexual abuse in Cook County, Illinois, Feb. 22, 2019. Photo: Getty Images

What's in a name? Artists often give themselves nicknames to reflect their identity, revealing a part of their personality that they want to share with fans. It's something R. Kelly himself does — but in this case, his nickname has a more sinister connotation.

R. Kelly (whose real name is Robert Kelly) doesn't just use his shortened performing name. He's also called himself the "Pied Piper of R&B" for over a decade. In songs like the remix of "Step In The Name of Love" he proudly sings the moniker: "It's the Pied Piper of R&B, y'all!" The Lifetime docu-series "Surviving R. Kelly" delves into the allegations of sexual abuse and relationships with minors that have followed R. Kelly for decades — and the first episode is entitled "The Pied Piper of R&B," with show commentators noting that the nickname is reflective of these horrific allegations.

So who exactly is the Pied Piper, and why would Kelly take on this persona?

The origins of the Pied Piper of Hamelin trace back to Germany during the Middle Ages. A man in colorful clothing comes to a rat-infested town to lure the vermin away with his magic pipe. It works, but the citizens refuse to pay for his services as promised. In retaliation, the Piper uses his magic pipe to lure all the children away from their homes and follow him.

There are several versions of this basic story, popularized by the brothers Grimm. Robert Browning famously wrote about the cautionary tale of the Piper in his 1842 poem:

By means of a secret charm, to draw

All creatures living beneath the sun,

That creep or swim or fly or run,

After me so as you never saw!

And I chiefly use my charm

On creatures that do people harm,

The mole and toad and newt and viper;

And people call me the Pied Piper.” 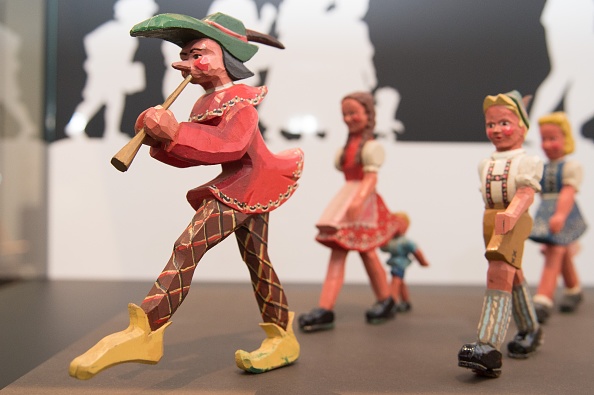 He documents how the Piper stole the children away in this verse:

And ere he blew three notes (such sweet

Soft notes as yet musician’s cunning

There was a rustling that seemed like a bustling

Of merry crowds justling at pitching and hustling,

And, like fowls in a farm-yard when barley is scattering,

Out came the children running.

All the little boys and girls,

With rosy cheeks and flaxen curls,

Tripping and skipping, ran merrily after."

The legend lives on today at the Piped Piper Museum in Hamelin. Fans remain captivated. As the Washington Post reports, there are several theories that lead historians to believe that the fairytale actually happened. For instance, there was panel in a stained-glass window at Hamelin's Marktkirche church that depicted people surrounding a brightly-dressed man in 1314.

Norbert Humburg, director of the Hamelin city museum, told the newspaper that the rats were added later to the narrative. "They didn't enter the story until 300 years later, in the 16th century," he said. "But the rats are really a side issue. The important question is who was the piper and what happened to the children."

Some speculate that the children may have left to be recruited into the army. Others wonder if they were indentured servants escaping the city.

Given that most of his allegations involve underage girls, supposedly keeping several of them from their families, many find Kelly's use of the nickname "The Pied Piper" to be problematic. For instance, Joycelyn Savage was an aspiring singer who left college to become Kelly's protege. Before long, she was romantically involved with him and has since severed ties with her family. The Savages believe Kelly is brainwashing their daughter to be a part of his alleged sex cult.

Another alleged victim is Azriel Clary. Her parents haven't spoken to her in three years. They believe Kelly lured her away to join his cult after meeting when she was just 17. The docu-series alleges this is a pattern of behavior, in which Kelly leverages his fame and connections to entice young girls into following him. But Kelly doesn't see an analogy between this and the Piped Piper. In 2016, he explained to GQ why he started using the name: “I started calling myself the Pied Piper when I started using the flute sound in my music...I was the Pied Piper. You know, blew a flute. I started calling myself the Pied Piper because of the flute.”

He added that the fairytale had nothing to do with the name — because he claims he didn't read it. “I don’t really know the story of the Pied Piper. I don’t read stories, first of all. I just remember either a rabbit or a rat leading people out of the village with a flute.”

Autopsy Of Kindergarten Teacher Reveals How She Died